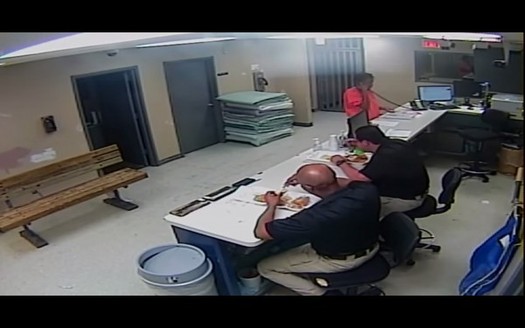 How can we tell that Sandra Bland wasn't already dead last week when her mug shot was taken? Because sometime later, we can see this desk officer putting honey on a biscuit as Bland was making a phone call.

If you can excuse the sarcasm, we never thought there was anything unusual or untoward about her mug shot in the first place, even if our post drew all kinds of attention for calling it out. What we thought was unusual and highly telling, however, were the number of people on social media doubting anything and everything about Bland's jail experience, visual and otherwise.

In the face of the rumors, we even tweeted last Thursday about the need to disclose this further information:

.@blogdiva More q’s for state: Were more mugs taken? More complete? When? By police & sheriff? Before/after booking? Will all be released?

No, the paranoia (including, the morbid photoshopped pictures of Bland's mugshot photo) did not surprise us at all. Not when you consider the public's inability to account for her condition, treatment or emotional status from the point of the dash cam video to the point of the video of her corpse being removed three days later. Given such selective and tactical provision of "bookend" visuals in such a controversial, and then shockingly tragic case, the state shouldn't have been surprised that people would try and imagine the rest -- in this case, literally so. You could almost say it was the state itself, by omission, putting pictures in people's minds.

In finally releasing extended edits from hours and hours of closed circuit video, Waller Country officials have now comprehensively responded to those disbelieving rumors. More importantly, though, and profoundly so if you're a grieving family member or friend of Ms. Bland, you have the precious ability to see through those walls now and to share what she was experiencing as she was stepped through all the stages of jail procedure from Friday afternoon through Saturday. You have the ability to observer her as she's on one of many phone calls (Bland having been allowed to make a larger-than-usual number, most of them for free, thanks to the "humanity" of the jailhouse personnel, as Captain Brian Cantrell of the Waller Country Sheriff's Department emphasized at the extended press conference yesterday). And you have the ability to observe where she spent her last days, acquiring some sense of the environment that, in all its banality and negation, apparently sent her over the edge.

If the skepticism surrounding the mug shot, by the way, arose out of what we couldn't see, let's make sure to note what is clearly evident with all this new footage. 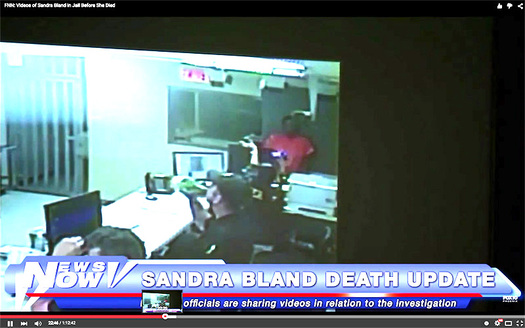 First, we have the state, clearly rattled over the rampant social media suspicion and ensuring threats, in full CYA mode, releasing what they represent (please pardon the expression) as "the smoking gun."

County Judge Tray Duhon, who was representing Waller County and who was running the press conference and narrating the video timeline, sounded almost sanctimonious as he unveiled, then broke down the mug shot process, bluntly emphasizing how Bland -- against the notorious wall; in the notorious semi-slump; probably looking a little out-of-it because she had just been woken up -- was fully alive. (If it's harder to capture the context in the screenshot, the jail tech, above, waves for Bland to turn for her profile, the product legible on her desktop screen. And yes, we specifically grabbed a frame with the other officer swigging from a bottle, just getting to do what free people do.) 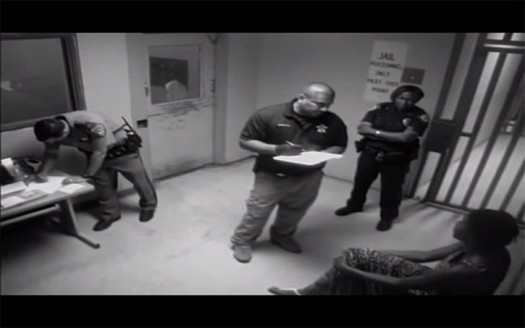 Then, there's the documentation of the psychological questioning. (Notice the arresting officer in the background, all business-as-unusual.) For Duhon and the state, it's vital to also visually back up how Bland reported a previous suicidal attempt.

Back to the lack of savvy about the impact of visuals, however, would the state not see this scene as a double-edged sword? In other words: how does it look when Bland is surrounded by state personnel on Friday, when they want what they want, when given the risk factor (and now the visual proof of it), the presence of officers and all that vigilance and attention to detail is absent on (and still invisible from) that fateful Monday? 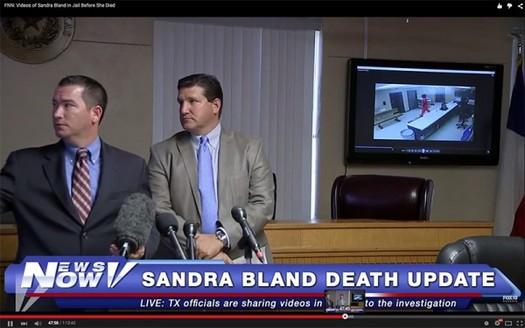 There's also the plain creepiness, and callousness, of the live press conference, especially those instances where we're so privy to the mugs of the county officials going on-and-on about camera numbers and time codes, or the lunacy of social media, while somebody's daughter, somebody's friend and one more African-American citizen arrested under the most fallacious of circumstances can be seen going endlessly back and forth, and all around in the frame like a fish in a bowl. 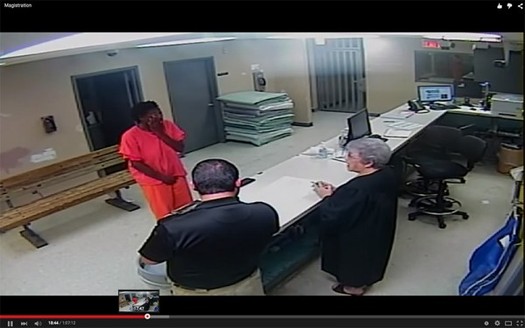 More than any of that, though, what all the footages reveals in tortuous detail is a Sandra who wasn't angry, or defiant. Just frustrated. And repeatedly tearful.
But most outrageous of all, if what we're presumed to have now is full visual disclosure, I'd say the state has an even bigger credibility problem on its hands than it had before. Because, if we can now literally see how we got from Friday to Saturday, from the arrest through all the ministrations, what we're still left to imagine -- with all the staff and the plethora of cameras around -- is how we got from Saturday to Monday, and from all the state's visual self-defense, to this: 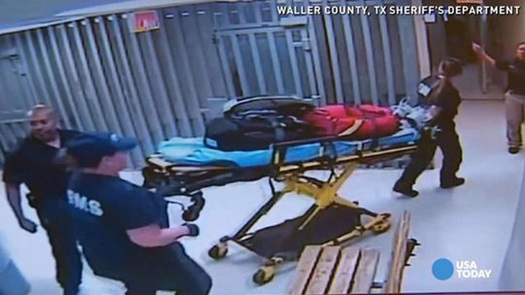