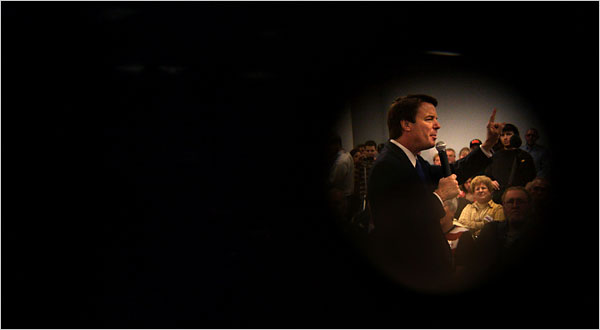 In light of the recent Bhutto assassination and the fact that Edwards is resuscitating a subject that seems to have been politically disappeared, this image is really disturbing.

The photo accompanies an article yesterday by controversial NYT writer, Michael Gordon, outlining John Edwards's just announced proposal for an accelerated troop pullout from Iraq. The article, however, is not a news story so much as it is a mugging.

In the fifth paragraph, Mr. Gordon takes a now familiar dig at Edwards by describing how Elizabeth Edwards (described as John's "political partner"), who was listening in on the interview, felt the need to underscore the candidates own points for him.

At the beginning of paragraph six, Mr. Gordon feels compelled to point out that Mr. Edwards's plan "is at odds with the strategy developed by American military commanders."

Mr. Gordon uses paragraph fifteen to emphasize that Mr. Edwards has never visited Iraq, while immediately undermining his attack with the fact that the Pentagon only allows visits by Congress members and Governors. (Maybe a subtle dig over the fact that Edwards left Congress?)

In paragraph sixteen, Gordon makes an issue of Edwards's phone call to Musharraf after the Bhutto assassination as John seeking "to highlight his knowledge of foreign policy." The writer also finds it odd that Edwards didn't mention Iraq in his Sunday campaign appearances "save for a denunciation of greedy military contractors." (The write up leaves it unclear, however, if the "greedy" reference belongs to Edwards or Gordon.)

In paragraph seventeen, the writer deems to point out that Edwards was actually able to speak "comfortably about the subject [of Iraq] ... without notes or help from policy advisers."

In paragraphs eighteen through twenty-two, Gordon turns into doom-sayer and Pentagon mouthpiece, warning that: "American military commanders have publicly cautioned that a rapid withdrawal of troops risks a new escalation of sectarian violence." Also citing a National Intelligence Estimate, he warns that Mr. Edwards's plan would "probably lead to 'massive civilian casualties and forced population displacement'. " In both cases, however, Gordon blurs the distinction between removing troops in general as opposed to troop specifically engaged in training, as Edwards proposes.

And in paragraph twenty-three, Gordon actually makes himself, and his ego, a subject of the story, reporting how Mrs. Edwards "politely chided this reporter for failing to ask about Mr. Edwards's plan to train some Iraqi forces outside Iraq."

So, what are we to make of this photograph? Is it possible Edwards prevents hostile reporters from gaining any more than key hole access to his appearances? Or maybe Iowa Lakes Community College, where this event was held, really is on a lake and the campaign event was held on a boat -- this scene coming by way of a porthole.

If it's not one of those explanations, or else a cheap joke on "fade to black," then Edwards reads like a target to me.

For more of the visual -- including all the hijinks from Iowa -- visit BAGnewsNotes.com.