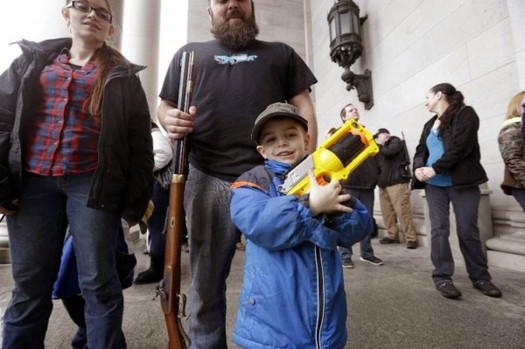 Seattle gets most of the national attention when it comes to Washington state, but sometimes the real action happens in Olympia, the state capitol. On Saturday the capitol building in Olympia served as a meeting ground for gun rights activists who gathered with the intention of parading their weapons into the Washington state legislative chamber. Given the popularity of home-intruder arguments in gun rights discourse ("if someone comes into my house, I need to be able to protect my family"), it's worth noting quickly that the reason all those armed citizens never made it into the legislative chamber is because someone at the state capitol remembered to just lock the front door.

Anyway, just in case an easily foiled plot weren't enough to make the point, images by AP photographer Elaine Thompson don't do any favors for the shrewdness of Olympia's arms enthusiasts. Against troubling statistics showing that thousands of children are injured or killed by guns each year, Thompson's photos of the Olson family offer a visual counterpoint to all this business about guns in public and reliable gun ownership. A core tension animating these pictures concerns the baffling resilience of a down-home, frontier family aesthetic within an otherwise reckless gun culture that claims the lives of so many children. For daddy and mommy Olson, having guns near the kids looks like a matter of pride and joy. The Olsons might as well be posing for the family album. Little junior's going out shooting with dad today...gonna be just like him when he grows up. See? He even knows how to keep his fingers off the trigger until he's ready to shoot. That's my boy.

In terms of playing to the public's softer side, we might understand the logic behind a visual strategy of bringing the kids. But when you really look at it, the optic of family values just doesn't mix well with the optic of gun rights advocacy.

Because they are a technology of damage, it's hard to be safe with guns. (Don't point that thing at someone's head, little fella). Even packing toy heat can get you killed these days. And sadly, so many gun accidents involving children even happen under parental watch. How many times do we have to tell you it's not a toy? 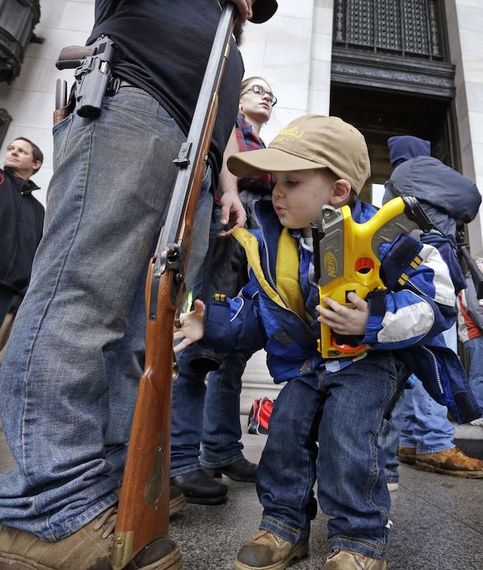 Note: This post was written by Philip Perdue for BagNewsNotes.com.