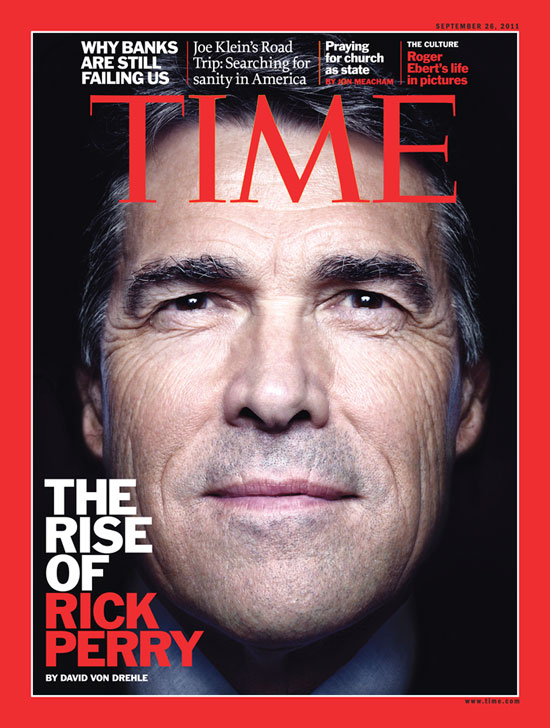 Rockstar photographer, Platon, has done five presidential candidate covers for TIME, three of Obama, one of McCain, and one of Obama and McCain. (You can see them here on Platon's site.) Of those five, two of them employ the distinctive and dramatic style above, the candidate's head seeming to float in space against a mostly black background. I say "distinctive" as much for the effect as the fact these covers are practically iconic by now.

So, you remember my problem with TIME's "death of bin Laden" cover? the one where they "X'd" him out with two red lines across his face. Having used the "cross out" effect three times previously, first on Hitler, then on Saddam Hussein, and then on an al Qaeda bad guy in Iraq the U.S. military had been making a lot of noise about, my argument was that covers "of a type" carry meaning in this hyper-visual, "Google-Imaged" world we're all surfing around in.

Which leads me back to Platon, the latest TIME cover, and the overnight-sensation, Rick Perry. Now, assigning someone the likes of Platon to shoot a Perry cover is going to automatically lend a gravity you would otherwise give to someone "just that far away" from the GOP nomination (as if the media primary was the only one that counts this year anyway).

But then, considering Platon and TIME, up to now, reserved the "big floating head" treatment for shoe-in nominees, Obama and McCain, and their respective Denver and Minneapolis coronation issues, the treatment charges-up the affably-faced newbie (and Beetles fan) with almost an air of inevitability.

...Oh, and here's our Tumble on the other three editions.