When the first Hobbit movie was coming out, I re-read the novel I loved as a kid to reacquaint myself with the story and was more enthralled than I expected to be.

The wry voice was something I missed as a twelve-year-old taken by the adventure and fantasy, and I reconnected immediately with what moved me most the first time: Bilbo's resourcefulness in fooling Gollum and fooling the dragon. In each case, the small, clever Hobbit outwits a fierce enemy-what a treat that must have been for a bookish, picked-on kid with a tough older brother.

I see a connection with what also appealed to me years ago in Harper Lee's Scout. She defeated monsters, too, when she helped defuse the mob in front of the jail. It's one of the best scenes in the novel (if not entirely believable). But Scout herself doesn't hold up for me today because I just don't believe her voice. She often sounds too mature for an eight-year-old, as when near the end of the book she thought (according to her adult self) "there wasn't much else for us to learn, except possibly algebra." 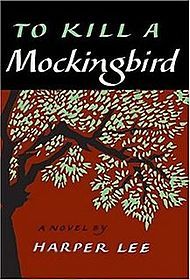 And I'm mixed about the book overall because it feels like an uneven blend of southern novel of manners with the "race novel" Lee originally intended, grafted onto a courtroom drama which seems clichéd -- through no fault of her own. We've all read so much John Grisham and Scott Turow, or maybe I have as a long-time crime fiction reviewer. At any rate, even on its own terms, the story of the rape and trial takes way too long to get going. And in terms of suspense, the final appearance of Boo Radley is a letdown after all the speculation about him.

Some of Atticus's sentiments also grated on my nerves, like his belief that "a gang of wild animals can be stopped, simply because they're still human." That feels hopelessly naive and sentimental--especially when you consider that Lee wrote the book after The Holocaust. But closer to home, there was the brutality in the South directed at Civil Rights protestors.

Flannery O'Connor damned the novel with pretty faint praise when it came out: "I think for a child's book it does all right." That seems unduly harsh (and unfair to YA literature). What works best for me as an adult reader is the slow accretion of local color, the barbed social comedy, and the graceful prose.

Of course the book's dramatic core couldn't be timelier: 2015 America is still grappling with racial injustice just like Harper Lee's fictional town was in Depression-era Alabama. That's sadly a story which seems to make the news every week -- if not more often.

This blog originally appeared at Writing Across Genres