Greg Lembrich is a big lawyer. For one, he's a tenacious litigator at a top firm, Pillsbury Winthrop Shaw Pittman. But equally important for his pro-bono election-protection work on Indian reservations, the 6-foot-4-inch, 250-pound Lembrich is -- simply put -- a rather large lawyer. When going toe-to-toe in polling-place parking lots or back rooms with ranchers and political-party operatives attempting to prevent Native American citizens from casting ballots, he's needed every inch and ounce, along with his encyclopedic knowledge of election law.

Voter protection is patriotic, and citizens turned away and ballots not counted are attacks on democracy, Lembrich told me when I met him at Pillsbury's New York City office, where he would soon meet with the firm's election-protection team. (Shown below are Lembrich, sitting center with partners Portis Hicks, left, and Ken Taber; standing, left to right, are Rachel Shamash, Yuri Pope, and Mara Abols.) If anyone wants to help the pro-bono group safeguard voting rights, Lembrich can suggest a destination. 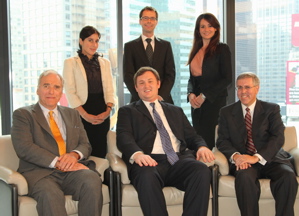 "South Dakota is the frontline of today's civil-rights battle," Lembrich said. The state and entities within it have fought, and lost, about 20 voting-rights cases brought on behalf of Native plaintiffs by the American Civil Liberties Union, the U.S. Department of Justice, and others. "To make a huge difference for citizens in the poorest counties in the nation, to be a Freedom Rider, not just read about them, join us for election monitoring Nov. 2."

"Us" is Four Directions, a national voting-rights nonprofit started in 2003; Lembrich has been legal director since 2008. His boss there is executive director O.J. Semans, a Sicangu Lakota from Rosebud Sioux Reservation and long-time civil-rights advocate, shown below with his wife, Barbara. Both men credit her for much of the group's success. "Barb's quiet about her achievements, but she's a great strategic thinker and an inspiration," said Lembrich, who noted the couple's 2003 national award for grassroots organizing. (For a recent Four Directions effort, see this blog post.) 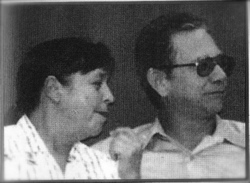 On Nov. 2, Four Directions will have election observers in 30-plus precincts on or near South Dakota reservations -- and does accept volunteers who tip the scales at under 250. "Things have calmed down since I first went in 2002," Lembrich said. At the time, he was in his third year at Columbia University School of Law and had a great job lined up, so had backed off his studies. "Ben McAdams, a fellow student who's now a Utah state senator, told me, 'Stop watching Law & Order and Dukes of Hazzard reruns and make yourself useful.'"

When New Jersey-born-and-raised Lembrich arrived in the Badlands for precinct monitoring, he found the Wild West, with cops tailing Native Americans to the polls, rumors of dragnets for Indians, white ranchers intimidating Native people lined up to vote (as in, "I see you're a troublemaker, I'll get you fired"), and illegal voter challenges. The 24-year-old grew up in an instant.

Improper challenges are what he, a dozen more Pillsbury lawyers, volunteers from additional major firms, and others will mainly confront this year. "Nowadays, problems stem less from harassment and more from confusion: voters mistakenly not given affidavits to sign in lieu of photo ID, for example," Lembrich said. "Four Directions observers must solve problems on the spot, or voters are sent away or given provisional ballots that are rarely counted unless litigated."

So why has his legal director squared off in parking lots with just two of those groups? Native-vote suppression generally arises from whites in a cowboys-versus-Indians state, where visitors may be startled to see the unbridled scorn leveled at Native Americans by individuals and the media. More chilling, a U.S. Civil Rights Commission report offers anecdotes and statistics on the interracial violence to which Native people are subjected there, while an Amnesty International report details crimes against Indian women.

And Republicans? With over 80% of South Dakota's 40,000 Native registered voters typically going Democratic, the GOP appears reluctant to see them casting ballots; its operatives have disrupted reservation voting in past elections, according to interviews by this reporter, contemporaneous newspaper articles, and sworn affidavits Four Directions has collected from voters, poll-watchers, and an election official. When contacted, the Republican National Committee did not respond directly to these allegations. Instead, spokesperson Jahan Wilson said, "We believe all South Dakotans should vote and encourage them to do so." He added the RNC was sure they'd vote Republican this year.

To head off problems at the pass, Lembrich, below, is working on Four Directions' 2010 election-protection manual and will present it in South Dakota voter-education sessions. 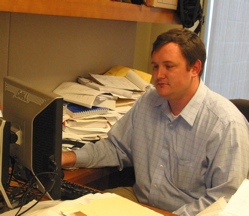 The manual's previous versions have gone viral, with copies passed from reservation to reservation nationwide. "Some material is transferrable, but much is South Dakota law, so communities elsewhere should check their state's laws before using it," he warned. The document has lots of pages, but one bottom line: Every eligible voter who wishes to cast a ballot can do so, and every vote is counted. 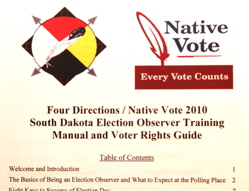 Photographs of the team and the voter-protection guide by Warren Berry; photo of Lembrich by Stephanie Woodard.