I'm hearing the words, "Don't give up the apartment."

It was my first of what would eventually add up to 10 yearly appointments with Terry, a psychic who was popular among media types -- a ritual I'd later refer to as my "annual checkup."

We were seated in the run-down, rent-controlled sixth-floor walk-up Terry herself had held on to for 20-odd years at the corner of Mott and Prince Streets. In the fall of 1993 that neighborhood was still considered Little Italy. It would be another few years before realtors would rebrand it as "Nolita."

Petite and tomboyish in her 40s, Terry sat across from me at a table strewn with tarot cards, alternately flipping them and pushing back her little-girl bangs with the heel of her hand.

"Yes, that's definitely the message," she said, after closing her eyes for a moment. "Don't give up the apartment."

Well, no shit, I thought. I had a lease on a marginally decrepit but livable rent-stabilized one-bedroom in a tenement on East 13th Street, for which I paid about $600 a month. I didn't need a clairvoyant to caution me against relinquishing it.

Besides, real estate advice was hardly what I wanted for my $150. No, I wanted Terry to tell me what most people go to psychics to hear: that there was love on the horizon.

I was 28, two years out of an ill-considered marriage I'd entered at 23. Add to the usual difficulties associated with finding love in New York that I was a bit of an odd bird, difficult to match. All my life I'd been a strange mix of loner, social butterfly, and musical theater geek, sometimes painfully awkward around people, at other times oddly charming and entertaining. I felt like some kind of alien, out of step with the kids I grew up with (even fellow theater geeks thought I was weird), my classmates in college, and my coworkers at the assorted publications where I worked over the years. I didn't like the same clothes, hairstyles, movies, music, and food that most of my peers did, and I had this insistent need to do most things my own peculiar way, even if it made no sense.

The preference for my own company naturally made it difficult to couple up too comfortably as an adult. I was horribly lonely and wanted to find that one other outsider who was put on this strange planet just for me -- one who would, of course, give me plenty of space for my loner activities. So far, I only knew how to get that from guys who were difficult to pin down, emotionally withholding, and typically addicted to at least one substance, which is to say even less available than I was. Say what you will about unavailable guys, but you don't run the risk of making them feel neglected when you want to do your own thing. Dating them so I wouldn't feel hemmed in turned out to be a faulty strategy, though, because they drained me of my psychic energy -- when they were around and when they weren't -- so I never really got to be alone when I was alone, and when we were together, I was never fulfilled.

As for nice, available guys, I seemed to be utterly allergic to them as mates but great at being friends with them. And so I introduced one awesome male friend after another to my female friends. When the second of four couples married, they dubbed me "The East Village Yenta."

The matchmaker had no talent for setting herself up, though. This job I'd have to outsource. That's where Terry came in.

"I see the letter B," she said in her flat, western New York accent. "Hmm. Who could that be? Pick nine cards."

When I was done choosing one and then another, she shifted them around into different formations. "Okay. So, this person whose name begins with B. He's got a goatee, maybe? I see him in a room with sharp angles, and a buffet with really mediocre food."

For years afterward, I would scrutinize intently the "angles" of one mediocre-buffet-filled room and then another to determine whether they might in fact be "sharp."

She explained, "What I see here could happen in 10 minutes, or 10 years from now. It's all very Agatha Christie. I'll hear a name, or I'll see an article of clothing, and 10 years from now you'll go, 'Oh, my God -- there's that guy with the red shoes Terry was telling me about!' And he might not actually be your guy. But you can bet he will have something to do with your guy."

Ten minutes or 10 years? Couldn't she pinpoint the timing of her predictions just a little more accurately?

"But time isn't linear, dear." Whatever that meant.

Let me cut to the chase here. Ten years almost to the day after my first reading from Terry, in the fall of 2003, I met a (goateed) guy named Brian.

Brian. Whose name starts with B.

An hour after our first date, brunch at Life Café, I attended a wedding reception -- in a room with sharp angles and a buffet with really mediocre food. Well, the closest any room's angles had come to being "sharp" in the decade since Terry had predicted that detail. (The wedding was at the industrial-chic, poured-concrete-walled Tenth Street Lounge, where there were no soft edges. Whatever. Work with me.)

Brian was a really nice guy, and fortunately, thanks to roughly $20,000 worth of psychotherapy, I no longer had a strong aversion to that. He was cute, smart, funny, creative, and, I would later learn, totally cool with me being a weird loner when I needed to be. He'd also soon come to encourage me to stop making my singing (one of my favorite loner activities) a private affair, and accompany me on pretty much every instrument on recordings we'd make together.

But let's get to the important stuff: he had real estate, specifically a rambling below-market-value loft in a Gothic Victorian former yeshiva on Avenue B, across from Tompkins Square Park. After our third date, he invited me up. As I stepped in behind him, I couldn't believe my eyes -- 1,800 square feet on two levels, three bedrooms, high ceilings, exposed brick, big windows, an arched entryway, and other interesting architectural details. It was run-down with chipping paint, which gave it a bohemian feel similar to that in my apartment. Brian and I shared the same threadbare flea market style, with mismatched furniture, some of it picked up right off the curb -- the same place I'd found the desk where I still write.

Only a few months after we started dating, I moved, unofficially, into that incredible, gaping loft, and began illegally renting out my place on 13th Street -- by the weekend, by the week, by the month. Eventually, though, toward the end of 2004, my super warned me that I was in danger of getting busted. "The landlord's been asking me if you really live here," he said. Brian and I were engaged. There was no question we'd ultimately choose his 1,800 square feet over my 350. Maybe it was time to hand over my keys.

My last day in the apartment, after all my stuff had been moved out, I sat for a while on the scraped-up hardwood floor. Without my furniture, clothes, books, the memory-steeped markers of my time there, the place had a peacefulness to it that I wanted to inhabit for one moment longer. It struck me that the sunlight streaming in was the same golden hue it had been when I moved in. I swear it could have been the same day. Had any of the things I remembered actually even happened here? The many lonely, gloomy days interspersed with relatively brighter ones? The all-nighters to meet freelance deadlines? Twelve birthdays? The parade of bad boyfriends, first nights together, tearful last nights, promises made and broken? Was this the moment before or the moment after? Maybe time isn't linear.

Brian and I were officially cohabiting on Tompkins Square Park for one measly month when we got the news: we were getting kicked out. The building had been awarded Landmark status, and we were allowed to stay just one more year, with our rent nearly tripled. The week after we eloped, at 39 and 42, we welcomed two roommates to help us afford the place. Yes -- we got married and then we got roommates.

We spent a bitter year in housing court trying to fight it. Toward the end of the expensive, infuriating legal process, when it became clear that we were probably going to lose the place, one of our lawyers asked each member of the tenants' association, "Have you got some other place to go?"

And that's when I heard it -- Terry's voice. "Don't give up the apartment."

Shit! I gave up the apartment! How could I have given up the apartment?! I was suddenly sure those words Terry had uttered so many years before pertained specifically to our current situation. I couldn't believe it. I began to kick myself.

But also at some point during that struggle, Brian and I both found ourselves feeling soured on the East Village and the city as a whole. Never mind that we were getting priced out. The city wasn't the same anymore. Of course, New York is never the same, from one day to the next. But now it seemed there was a more extreme, rapid level of gentrification. Every neighborhood was starting to appear and feel the same. Each one lost its individual character as one deli, pizza place, shoemaker, or thrift shop was replaced by a Chase or a Duane Reade or a Chipotle, or a pricey, twee mini-cupcake shop. One by one, our favorite restaurants and shops went out of business. A three dollar umbrella was now five. The Second Avenue Deli was now on Third Avenue. All this made it mercifully easy to leave the island we were getting kicked off anyway.

We moved upstate to Rosendale, a depressed, funky little river town that's become an outpost of what I've labeled the Downtown Diaspora. Nearly all our friends there moved up from either Lower Manhattan or Brooklyn. Rosendale reminds me of Cicely, the town where the early 1990s television series Northern Exposure is set, with lots of hippies, theater geeks, and other offbeat characters flying their freak flags. I fit right in.

Excerpted from Goodbye to All That: Writers on Loving and Leaving New York, edited by Sari Botton. Available from Seal Press, a member of the Perseus Books Group. Copyright 2013. 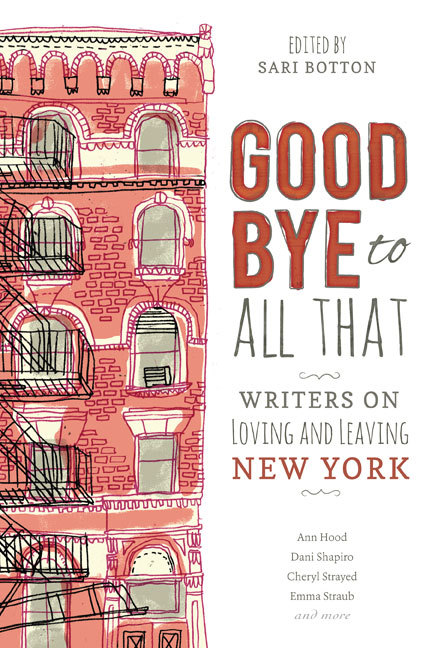 7 Influential Women Who Failed Before They Succeeded

The Must-Have Black Tights For Fall, Now That It's Getting Colder