To use the vernacular and borrow from the show's title, a group of real housewives of Potomac gathered last night at a Potomac home to watch the debut of The Real Housewives of Potomac, #RHOP. The viewing was one of many throughout the area as residents of the DC suburb gathered to see how their town and their women would be portrayed on TV. Everyone in the room had the same sentiment: Since the show was announced in late 2015, there was curiosity about who would be in the show and if anyone would know anyone.

Laura Papageorge hosted the all female potluck dinner and dessert at her house. Laura's husband, who greeted guests, did not join in to watch the show.

A few in the group of 18 recognized one or two of the women gathered at a pool party that made the first-show cut, but no one personally knew or has every seen in Potomac any of the main characters of the show. 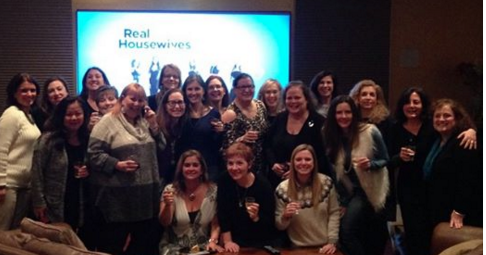 "Incredulity" would have to be the word of the evening as the group gathered to watch the debut on a 110-inch screen. The volume, set high, was only slightly louder than the constant murmur by the audience of women reacting out loud to comments made, places visited, attitudes, outfits and pretty much everything and anything that happened as the show spewed its brand -- that is, making mountains out of molehills. Ripe with examples, the Potomac housewives viewing the Potomac Housewives couldn't believe the etiquette issues that became the theme of the first episode, including:

1) Sitting in the un-assigned birthday girl's seat (this was a big problem for Karen Huger)
2) Going upstairs to find out from your friend -- for whom you are cooking (as a favor) -- where to find a pot while the home owner/hostess is still getting a pedicure minutes before guests arrive -- a big problem for Charrisse Jackson Jordan, wife of former Wizards coach Eddie Jordan.

"Incredulity" would have to be the word of the evening as the group gathered to watch the debut.

While some gathered for the debut have houses as large and beautiful as those portrayed on the show -- living in Avenel, on/near Glen Road and in the palatial River Road homes, to name a few of the places spotted in the set up shots -- the crowd gathered on Tara Road agreed on the following:
• No one walks around in shoes -- in the middle of the day -- with heals the size of those sported by Gizelle Bryant.
• No one in the room admitted to sharing a house and a bed with her ex-husband, as Juan Dixon and his real housewife Robyn Dixon are doing.
• A few have husbands who travel for business living elsewhere during the week or months at a time, such as Eddie Jordan and his wife Charrisse Jackson Jordan.
• No one has ever been to the burlesque restaurant at which the #RHOP celebrated RH Karen's birthday, though all were in consensus that it must be in D.C. (not Potomac). A few immediately googled, "burlesque restaurant DC" and confirmed it's in Northwest, DC.
• While some have cooked live Maryland crabs for summer parties at their homes (or at the beach), everyone agreed that if Jordan was going to have a catered party (with bartenders and a stylist to do her hair, make-up and pedicure the day of the party) she should also have also have hired someone cook the crabs, rather than relying on her friend, causing an etiquette snafu. "You can buy them cooked," the crowd shouted nearly in unison.

Everyone agreed that no one they know talks as rudely to each other as was portrayed on the show.

"The Real housewives of Potomac aren't the ones on TV. They're the ones on the sidelines at MSI soccer on Saturday and BCC Baseball on Sunday," said Jami Diese a former Potomac "housewife" from Columbia, Maryland who lived in Potomac for 12 years before moving to Florida to help care for her father-in-law.

The hostess agreed: "I think it was not a 'realistic' view of Potomac moms - the majority who work, are there for the kids and spend several hours a day driving," said Papageorge.

Lisa Berlinger-Koenick who now lives in Boyds said, "Too bad Potomac has been portrayed badly in that show. I grew up in Potomac and it was nothing like that show. I am a 'Housewives' fan and will never watch 'Real Housewives of Potomac' ever again." 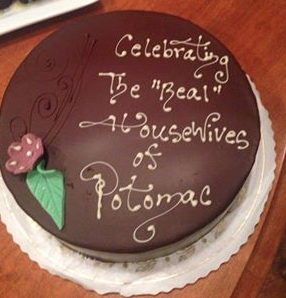 When asked Monday morning, after she had time to really process and think about the show, to discuss the what she saw in the first episode, Adrienne Morrissey Rothstein said, "Sorry, but I have work today. I guess I am not a real housewife!" Rothstein, who has lived in Potomac for 10 years, brought a chocolate cake from Stella's adorned with the beautifully lettered sentence, "Celebrating the 'Real' Housewives of Potomac."