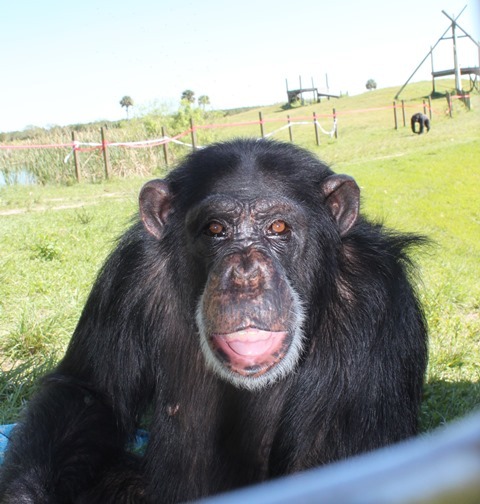 The air is filled with hoots, pants, grunts, blown kisses and screeches. They fight over territory, joust for dominance in the group and grieve when one of their beloved passes away. Is this some weird reality TV show? No, this is Save the Chimps, the world's largest chimpanzee sanctuary in a former orange grove in Fort Pierce.

Healthy, beautiful and often hilarious, this sanctuary is a place where a chimp can be a chimp.

Recently, I was lucky enough to tour Save the Chimps on Member Day with my husband, Jon, and sister, Emily. A city of over 250 chimps, the gargantuan sanctuary spans 150 acres. The property has 12 islands of three acres each, where chimps can roam in the grass, bask in the sun and are sheltered when needed from storms. In fact, during hurricanes, a staff person from Save the Chimps will accompany the residents in their shelters known as "chimp houses" to ensure the chimps remain safe.

Here's an aerial view of this chimpopolis: 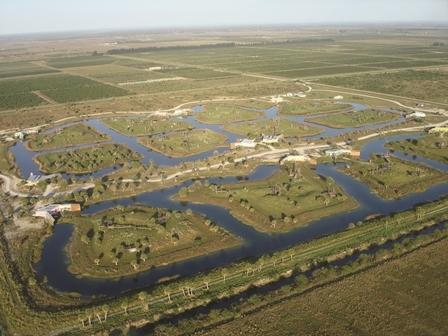 It is striking how humanlike these chimpanzees are. We share 98.6 percent of our DNA with them. Throughout the day they feast on bananas, oatmeal, pasta, craisins and PB&J sandwiches. The chimps paint. In fact, Cheetah's art won second place in the popular vote last year in the Humane Society of the United States Chimpanzee Art Contest, and was Jane Goodall's favorite. Most importantly, the chimps interact with each other all day, every day in a series of social situations than are probably more sophisticated than an average day in Congress. They partake in such festivities as "Chimpmas," "Chimp-o-ween", and "chimp-dependence day".

But these chimps did not always have it so good.

Many of these chimps were part of the U.S space program or were descended from chimps that were. In service of our country, these hairy veterans suffered electric shocks, extreme G-forces and a variety of experimental surgeries.

In 1997, the U.S. Air Force announced they would "divest" chimpanzees from research. The Air Force sent their former research subjects to the Coulston Foundation, a biomedical research lab in Alamogordo infamous for Animal Welfare Act Violations. Chimps like Bobby (who blew us kisses during our visit) were stuck in solitary confinement in tiny cages, where they only felt concrete and steel bars under their feet in a lonely and monotonous existence. Bobby was subjected to hundreds of medical experiments such as liver biopsies and respiratory tests repeatedly, and was depressed and emaciated. According to an interview with Save the Chimps veterinarian Dr. Bezner on ABC's Nightline, today with the help of psychiatric medications, Bobby is a new chimp.

Here is a more recent picture of Bobby. 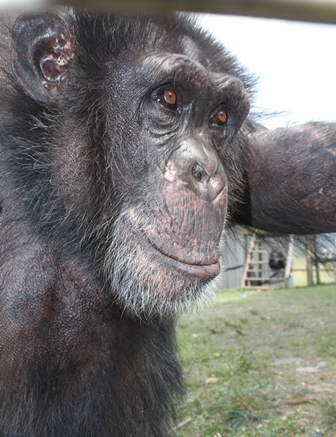 After a year-long legal battle with the Air Force, the late Dr. Carole Noon, with the support of Jane Goodall, gained custody of 21 chimpanzees in 1998. She established Save the Chimps as a sanctuary for these animals to live the rest of their years in peace, dignity, and comfort. A number of chimps who were former pets came to join the others at the sanctuary. In 2002, Dr. Noon got a call that was a game changer. The Coulston Foundation was going bankrupt, and Fred Coulston asked if Save the Chimps could accept upward of 200 chimpanzees. With the help of a generous $3.7 million grant from the Arcus Foundation, Save the Chimps was happy to oblige.

Thus began "The Great Chimpanzee Migration," as the Save the Chimps crew transported hundreds of chimps across state lines in a colorful, and very noisy, trailer.

Several of the chimps in this sanctuary came from the entertainment business and the pet trade. Chrissy, the first chimp pictured in this blog, acted in Babe 2: Pig in the City. April, September, and Pepsi lived in someone's personal home as pets until they became too large and too strong to handle. According to Dr. Bezner, the most mentally disturbed chimps in the sanctuary are the former pets and entertainers because they cannot properly socialize with the other chimps. They seriously think they are humans.

This is April. Adorable face but absolutely not a pet. 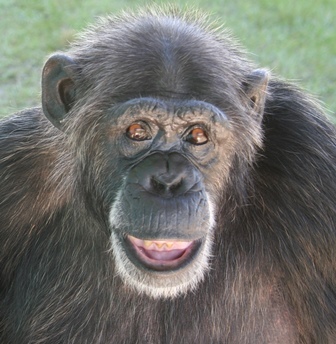 Save the Chimps is not a zoo and is not open to the public. The chimps are not a spectacle. You can only see them on Member's Day twice a year. And, there is an upcoming "Chimpathon" in March 2015 where you can run, knuckle walk, or do whatever for 16 km around and outside the property to raise awareness for these residents.

So what can you do to save the chimps at Save the Chimps?

It is expensive to take care of these chimps, costing around $16,000 annually per chimp. This accounts for food, medicine, and care. You can help by donating food to help them. There is a wishlist of apples, bananas, peanuts, and more at this link. The chimps will also happily eat the extra mangoes and avocados from the trees in your backyard.

Dr. Bezner is doing everything she can to take care of the chimps' health needs, but her resources are limited. She treats diseases, screens for heart problems, dispenses psychiatric medications, and performs operations from a small trailer on the property, known as the "vetmobile". According to Dr. Bezner, there is no medical facility in Florida that will accept chimps. While a normal hospital could technically treat a chimp as a patient, Save the Chimps doesn't do this because people would object. Save the Chimps needs the support to build the first chimp medical facility in Florida.

Most importantly, don't support movies or other entertainment with chimps, research that exploits chimps, or own one as a pet. Chimpanzees are our closest relatives in the animal kingdom, and it is our duty to treat them with respect and dignity

*Photos are courtesy of Save the Chimps.
*The views expressed are those of the author alone and do not reflect the views of Audubon Florida.