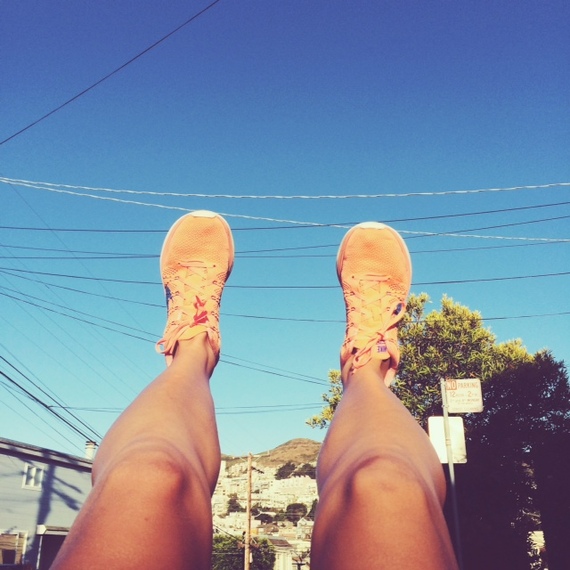 My daughter-in-law qualified for the Boston Marathon by running in a local marathon, making it by an amazing three seconds! She was really hurting the last five miles. A stranger began to walk-run alongside her, subtly encouraging her. She could hardly speak but managed to whisper that it was helping. And soon she was able to dig deep again and find whatever it is that drives a person to persevere to cross a finish line.

It's similar with relationships: passing through stages, getting support along the way, digging deep inside for answers and staying-power, and making it to the finish line called "real love."

I recently published a book on relationships. I asked a woman in her 20s whether her generation would read it. She said, "No, they're confident that they already know what they need." Then I asked a man in his 30s whether his generation would read it. And he said, "No, they'll just switch partners." Even my son said, "Mom, just give it to me in one sentence."

So here's the sentence: Getting past stage four is what relationships are all about.

When my husband and I began our relationship, I was renovating a building, including shoveling old insulation into garbage bags. Since we were in romance phase, Ron was ecstatically happy to help me shovel! We turned on music and danced on the beams. He wrote poems for me and learned to play "Georgia on My Mind." We jumped in the ocean with our clothes on. Even grocery shopping together felt mystical.

Stage one is the romantic phase. Falling in love is amazing. We feel complete. We can't do anything wrong. We're uncharacteristically positive. We're on our best behavior because we only want to impress and please each other. We let our defenses down. "Finally, someone who understands me!"

What's wrong with this wonderful picture? If we build a relationship with this calculated behavior, instead of who the person really is, we'll be surprised when we meet the rest of the person.

Once, when Ron and I argued, he walked out of the driveway and just kept walking - through the night along a country road for eighteen miles to a friend's house! He expected me to come looking for him, but that's not my style. The next morning, the friend let me know that he was OK. Ron expected me to come get him, but that's not my style either. Eventually, he got a ride home, we talked it out, and he admitted that it had been pretty scary, walking through the pitch-dark, especially when he'd crossed the bridge with the river rushing below. Funny guy. He should've been way more worried about the possibility of a copperhead warming itself on the asphalt.

Stage two is a reality check. Now we wonder, "What happened to the person I first knew?" Of course, we're no longer in a relationship with that person because now we're interacting with the flaws that weren't visible through our romance filter. What was cute in the beginning is now annoying. We're often frustrated, and we have painful disagreements.

Helpful tip: Examine whether you can say to your partner: "I accept you just as you are, and you don't need to change to meet my expectations."

It's important to know that we don't graduate through these stages, never to return. Instead, we pop in and out of them. Sometimes, all five in the course of a day!

I'm American, and Ron's from Amsterdam. And we spend months apart because we have children on two continents. Recently, we argued long distance and didn't speak for five days, which was weird because we normally connect several times a day when we're apart. On the fifth day, I talked to a friend who had just spoken with Ron. And I had that pubescent gut-reflex response - the one you get when someone knows more about your boyfriend or girlfriend than you do, and you feel like you got punched in the stomach. It felt like high school. And it motivated me to begin the repair process. So I made the first move. I called Ron, we talked it out, and everything was OK again. Taking a time-out is usually about processing, but it can spiral down destructively if not checked.

In stage three, disappointment becomes distress. We all want focused energy from our partners. And when they go on autopilot, we'll do something to wake them up. And most of us know exactly what our partners can't tolerate and which emotional missiles to fire at them. Small annoyances are now big issues that remind us of childhood traumas. Hidden agendas are revealed, which turn into power struggles. We feel trapped, so resentments build. We think about divorce. Stage three may seem unbearable, but it can last decades.

Stage four is where resignation and automaticity are fixtures. At least there are fewer fights. We've both settled into autopilot, taking each other for granted and repeating unconscious mistakes.

There's a sense of loss. We no longer feel exclusive with each other, so we've re-established old friendships and interests. There's the probability of giving up and drifting apart, mainly due to boredom.

Since Ron and I spend months apart, people ask us how we keep our relationship healthy. It would be easy to let our connection fade away from lack of energy. But we purposefully go in the other direction. We accept that our relationship is nontraditional and view that as a plus, not a problem. We don't take each other for granted. When we're together, there's appreciation. And when we're apart, there's anticipation. We know that real love is not limited.

Stage four is crucial. It's either stalemate or soulmate!

I'm a big fan of Marathon Talking. Two people set themselves apart from their normal routines and take turns talking for 48 hours. One talks for 24 hours while the other listens. Then they switch places. It sounds extreme, but it really works. Most people experience greater trust, understanding and acceptance. I've done four marathons, including one with my first husband after our divorce, and one with Ron before our wedding. Ron brought along photos of his past girlfriends to share. Not a good idea! He made me laugh a lot though, and we gained a point of reference for how to communicate well.

In stage five, real love finally wins. We've made a commitment to not settle for less. With everything we do, caring for each other is our first priority. We accept each other's weaknesses. We collaborate to overcome challenges. And we never again blame our partner for being wrong. We don't require him or her to do something to win our acceptance and approval. We are supportive best friends, and we back each other's interests. Being together is based on shared purpose rather than need. And we share a joint vision of the future.

Helpful tip: Acknowledge that you and your partner are both right and no one is wrong, and that your interests can't conflict because whatever is good for either of you is good for both of you.

What's most important to know about maintaining stage five? If we don't love ourselves, no one else will. Not because we're not loveable, but because it's not possible.