It's undoubtedly one of life's greatest questions. For years, we've asked how to get to "Sesame Street" while singing the theme song, but the location has always remained a mystery ... until now.

Throughout the "Sesame Street" series, savvy viewers have picked up on subtle clues to the areas where the street could reside. It's always been suspected that "Sesame Street" is in New York City, but through clues like zip codes and subway stations, you can theoretically figure out the real neighborhoods that could be home to the street.

In honor of its 45th anniversary, HuffPost Entertainment gathered these clues together, narrowed down the most likely whereabouts of the real street and then reviewed the info with the show's executive producer, Carol-Lynn Parente, to get her take on if "Sesame Street" could possibly be found in one of these locations.

The New York Public Library (NYPL) points out that Queens is one of the most diverse neighborhoods in New York City and it seems like a great fit for Elmo and the gang. But the strongest evidence that "Sesame Street" is in Astoria, Queens, is that it's actually filmed there.

Filming for the show moved to Queens' Kaufman Astoria Studios in the '90s, so technically directions to the studio tell you how to get to "Sesame Street." In fact, if you click on the lamppost in the interactive map on SesameStreet.org, you'll see directions to "Sesame Street" that would also take you to Astoria.

After reviewing the clues that "Sesame Street" is in Queens, Parente reiterated the NYPL's point. "That diversity really does speak to what 'Sesame Street' is," she said.

Take the R train to Steinway Street in Astoria, Queens.

Shortly after the show began, the area became home to the Sesame Workshop offices, the nonprofit organization behind "Sesame Street." Because of this, Parente told HuffPost, "The heart of the show really lives at Lincoln Center."

The neighborhood has gone through some changes since "Sesame Street" first started ("West Side Story" is actually set in the area), but original "Sesame Street" set designer Charles Rosen reportedly used Lincoln Center as inspiration for the look of the show.

Further solidifying Lincoln Center as a possible location for the street, former mayor Michael Bloomberg temporarily named the corner of 64th and Broadway "Sesame Street" for the show's 40th anniversary.

Take the 1 train uptown, toward Van Cortlandt Park. Get off at 66th Street - Lincoln Center.

The 86th Street subway stop is one of the most cited ways to get to "Sesame Street" because of its appearance in the 1978 movie "Christmas Eve on Sesame Street."

Further evidence: In the episode "Elmo Visits the Firehouse," Engine Company 58/Ladder 26 puts out a fire in Mr. Hooper's store. This engine company serves East Harlem and the north end of Central Park. When considering the subway stop clue, this would again put the street on or near the Upper East Side.

This location would again be consistent with an 86th Street subway stop. In addition, Victor DiNapoli, who spent more than 30 years as art director for "Sesame Street," reportedly said the show was always supposed to take place on the Upper West Side.

In an interview with Time Out New York, Napoli also said the subway entrance in the show is modeled after one from the area:

This is a direct copy of the original 72nd Street subway entrance on the Upper West Side ... It’s typical of a time when New York built many of the city’s Carnegie libraries, and it reflects the architecture of those buildings.

Parente offered more evidence in support of this location. "I think from an inspiration of physicality, certainly the Upper West Side. There’s something about the neighborhood people-wise of the Upper West Side that feels like it has the energy of 'Sesame Street,'" she said.

Take the 1 train uptown to the 86th Street.

During a talk at New York's Museum of Television and Radio in 1994, "Sesame Street" creator Joan Ganz Cooney revealed that she had originally wanted to name the series "123 Avenue B," which would place the location in Alphabet City, across from Tompkins Square Park, within the East Village. The title was later changed to find a more universal option, as explained by author Michael Davis in "Street Gang: The Complete History of Sesame Street":

It had its supporters ... But just as many argued that the title was precious and provincial. It sounded too much like a show tailored to New York viewers rather than a national audience.

Parente confirmed Alphabet City is a location visited by set designers to get inspiration for the show, and proof of this can be seen in actual stills from the program. For instance, the image above of the "Murray has a Little Lamb" segment was taken at Essex Street, a location near Alphabet City.

Take a 2 train down to 14th street, walk through the tunnel to the 6th Ave and grab a Brooklyn bound L train. Get off at First Avenue and walk to Avenue B.

Parente told HuffPost that one of the reasons the show hasn't revealed an actual location of "Sesame Street" is because it's meant for kids everywhere to identify with; as such, despite some clues, nothing can necessarily be verified. But she continued to say that the staff visits various locations to get inspiration for the show, drawing some of its strongest influence from the neighborhoods throughout New York City.

"I would say that’s pretty much all the facts you could manufacture for figuring out the mystery," Parente said. "We have sort of played with it over the years, which you see in the evidence you’ve gathered. You pretty much hit every neighborhood. We went to Alphabet City, we go to the Upper East side, Spanish Harlem, even Downtown."

Some of the other clues "Sesame Street" has played with include showing the Brooklyn Bridge in one of the show's openings and even sneaking in various New York zip codes, such as 10123 in "The Street We Live On," the 35th anniversary episode: 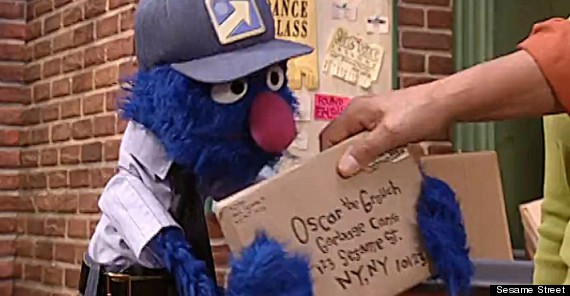 After reviewing all the evidence, HuffPost finally asked Parente, "Can you tell me how to get to 'Sesame Street?'"

Parente's response: "With a lot of hard work and good intentions."

This interview has been edited and condensed.
Directions originate from Times Square in New York City.