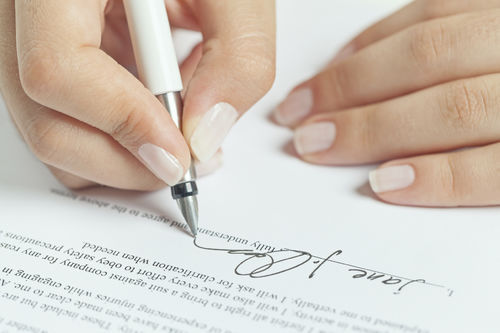 When I got married, I changed my last name. I was hesitant about it, but my then-husband wanted me to and I did find the notion romantic. We knew we wanted to have kids, and the idea of being "The Same-Last Names" was part of being a family (I thought at the time) -- and so I went through all the things you need to do to change your last name. Years later, when I got divorced, changing my last name back felt extra insulting.

If I had stayed married, maybe I wouldn't be writing this. Or maybe I would, just in a slightly different way. The fact that a woman is expected to change her last name when she gets married seems a bit off to me. Call me a feminist. (I am.) Call me a bitter divorcée. (I'm not.) But why is it on us to change our names? Why do we have to remove the name we were born with? Why do we have to erase part of who we are?

Not everyone does. Some women keep their last names. Others merge their name with their partner's, and super creatives come up with an entirely new surname, which I find most romantic now. But there is a certain pressure, I believe -- an unspoken one -- for us to change our last names when we get married. It's just "something we do" without really giving it much thought because that's just "what's always been done."

More from The Stir: 11 Texts That Reveal the Messy Truth About Life After Divorce (PHOTOS)

A lot goes into changing your name. You have to change all your credit cards, your bank, your student loan, your car insurance, your driver's license, your email, you. You are changing your name; the name you have been called for however many years will no longer be your name. Because you married someone. Sure, marriage changes you in some ways, but why are women expected to change their name? We don't need a man's last name to claim ownership over us. Those days are gone. Right?

Changing my last name back to my original last name was one of the last things I thought of when I was getting divorced. There were just a ton of other things to sort out, including the range of emotions going on. But I remember being in the lawyer's office reading over my separation agreement and seeing my married name written there. It seemed so strange attached to my first name, because it was no longer mine ... it was the name of my soon-to-be ex-husband. As we were ending our marriage, I felt that name no longer belonged to me. I had simply borrowed it for the duration of our marriage, long enough to have two children with that last name, and I had to return it.

When I went back to my maiden name (a term that is as antiquated as the practice of our taking a man's last name), it felt lonely. I was alone with this name. My children didn't have it. And as I'm a lover of words, that felt very off to me. I considered asking my ex if we could change the kids' names to include mine with a hyphenation, but I didn't want to add to the list of things we had to sort out -- and I wasn't convinced he would like the idea. Fighting with him over another thing wasn't what I wanted to do either.

Never again will I change my name.

More from The Stir: 5 Things I Used to Judge About Divorcees (Until I Was One)

If I get married again, and change my name to his last name (or even add it), then it's yet another name I will be known by. It's a matter of public record and every place you've ever done any kind of business with to have on file all your aliases. So far I have been Michele Zipp, Michele "Married-Name," and now Michele Zipp again. I couldn't add Michele New-Marriage-Last-Name to this list. It's all just too confusing, all while a man doesn't have to change a thing when he gets divorced ... or when getting married either.

I've seen doctors' who still have me filed under my married name. Once I walked into my OB-GYN and filled out the check-in sheet with my name. The receptionist called me up to say that she didn't have a Michele Zipp in her system. I had her check my married name and there I was -- the former me, my second coming. Next there was the awkward explaining that I am now divorced, and then I get the "I'm so sorry" look that you get from people you don't really know but who are hearing about how you got divorced for the first time. That tends to conclude with my giving an awkward smile. Men don't have to go through this. Any person who didn't change his or her last name when getting married and then getting divorced doesn't go through this. It's all just another reminder, another thorn, another declaration that I'd rather not have.

More from The Stir: 10 Moms Share What They Want You to Know About Autism

It follows me around. I still get junk mail for Michele Married-Name. I get called Mrs. Married-Name at my kids' doctor appointments and sometimes at school because my last name isn't attached to theirs even though their DNA is.

But beyond the unpleasant issues that come up from being one person, then another, then back to the first, it's an emotional thing. It's another reminder of who I was and what I hoped for in my marriage that didn't happen. Not changing my last name ever again makes me feel I am being true to myself -- who I am, my identity within my name. Me.

The Moment I Knew
More:
divorceMarriageRelationships
Newsletter Sign Up
An essential daily guide to achieving the good life
Subscribe to our lifestyle email.
Successfully Subscribed!
Realness delivered to your inbox