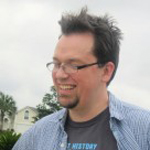 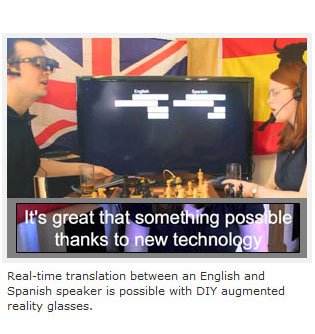 Think that only a tech giant like Google can make next generation augmented-reality glasses? Think again. A UK developer who has been hacking together his own Project Glass has now expanded its functionality to make a real-time speech translator. Will Powell, a 2010 graduate of the University of Oxford, has spent his spare time coupling Vuzix video eyewear with a few Raspberry Pis and an iPhone and iPad to allow for one person speaking one language to talk to someone speaking a different language with tolerable delays between translations provided by Microsoft's Bing.

The demonstration of his glasses from his website is pretty impressive, as you can see in the video posted to YouTube:

The video shows the translations as captions within a few seconds after the other person speaks. Now, some of the translations aren't exactly fluid or coherent, but that doesn't have to do with this technology but the inaccuracies of Bing Translator. The amazing thing about this setup is how this relatively simple prototype accomplishes such rapid speech recognition and translation at close to a conversational pace. Based on this video, it's quite easy to imagine a very streamlined translator being incorporated into something like Google Glass and could make the device essential for international businesspeople or travelers.

Powell has capitalized on his experience in augmented reality as he is also the lead developer at a business services company called Keytree that has developed the Kinect-hacked CEO Vision (which is worth checking out here). But it was after Google posted about Project Glass on their website that Powell set out to mimic the company's famous video and show that the same kind of interface and interactivity could be accomplished with Vuzix glasses. Here's that video that he posted: back in April:

Augmented-reality glasses are sure to become the buzz over the next few years, especially with Google suggesting that commercial versions of their Glass would be available in 2013.

When Google posted the video about Project Glass last spring, it effectively brought augmented reality to the public's attention and slotted glasses as the next evolutionary step in mobile communication, after the smartphone. But Powell's work here shows that there is lots of room within this space to explore different kinds of applications and functions. For years, theres bgeen a lot of talk about the potential of augmented reality, so it is exciting to watch that potential realized, whether at big companies like Google or DIY developers like Powell.

At the same time, these translation glasses show how rapidly we are advancing toward an actual universal translator. And that may very well mean that soon it won't matter what language you speak -- we'll be able to understand you with the right glasses on.