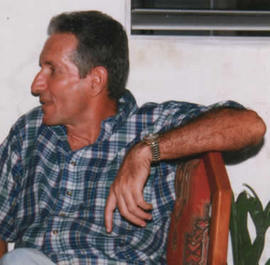 Adolfo Fernandez Sainz lives among stories like this one; he turned 61 on November 30, six of them locked in Canaleta prison since the Black Spring of 2003.

That afternoon the last of his canine teeth would be extracted. He had spent days on it, helped by another inmate who was skilled in extracting teeth, even molars. The collection of what had been pulled had been put under the pillow, and there they would stay until the time came for throwing them, with their yellow enamel, through the tiny window of the cell.

If all went as expected, the coming week he would be showing his smooth-gummed mouth to the doctor. He would say they had fallen out on their own, as had happened to the character in the film Papillon, which he had seen as a boy. In that film the prisoner had suffered from scurvy, but he, no. He had renounced his teeth to get access to the soft diet given to prisoners who could not chew. The preparation of plantain and sweet potato was more flavorful than the rancid food served to the others, so it was a question of survival to do without these useless things surrounding his tongue.

Cojo (The Cripple), had prepared the instruments as if he held a diploma in dentistry. Before going to Cojo's bunk he studied his canine for the last time in the polished tin that served as a mirror. There was nothing to be sorry about; it was full of cavities, twisted to the right and stained with nicotine. This little obstacle that would emerge from his mouth was not going to stand between food and his needy body. He gave it a few knocks to loosen it and walked over to where several prisoners were waiting for an extraction. On the mattress, a piece of a spoon and a small metal bar would take the place of a hammer and chisel to weaken the tooth; an improvised pair of pliers, made from two pieces of wire, would remove the root. Payment for the makeshift surgery would be in cigarettes, about twenty he had saved over several days of not smoking.

Later he would go to sleep with the throbbing around the hole that had once sheltered his eyetooth, but happy to be able to join the brotherhood of the toothless. Others in their beds would also be controlling the pain, while dreaming the whole night through of an aluminum tray brimming over with soft puree.

Translator's Note
Adolfo Fernandez Sainz was arrested, along with 74 others, in the Black Spring of 2003, when the eyes of the world were turned to the U.S. invasion of Iraq. An independent journalist, he remains in prison in Cuba. The following previous blog posts discuss his plight and that of his family.