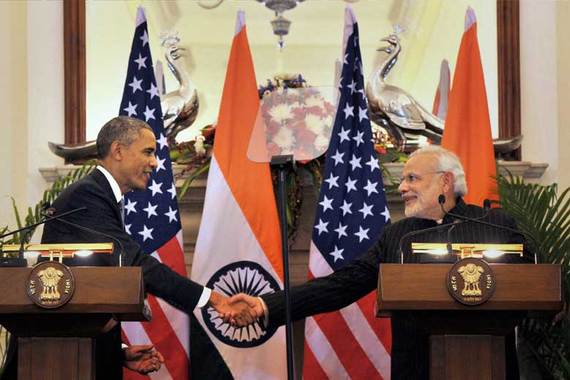 President Obama said in his address to young Indians in Delhi today:

I know the argument made by some that it's unfair for countries like the United States to ask developing nations and emerging economies like India to reduce your dependence on the same fossil fuels that powered our growth for over a century. But here's the truth: Even if countries like the United States curb our emissions, if countries that are growing rapidly like India, with soaring energy needs, don't embrace cleaner-energy fuels, then we don't stand a chance against climate change.

His statement cuts through years of political inertia in India on climate change. There are no two ways about the fact that the United States and the developed world have a much greater responsibility to dramatically cut carbon emissions, but India's continued dependence on coal and other fossil fuels could tip the balance toward irreversible climate change. With over a billion people on the front lines of extreme weather disasters, it's a state of climate emergency that India needs to recognize and act on.

The opportunities to leapfrog the fossil-fuel era are here, and so is the technology that is needed. What has been lacking so far is the political will that can transition us away from our addiction to conventional energy. Both Obama and Narendra Modi (NaMo) have waxed eloquent on stronger economic ties and friendly cultural relations, but their statements on climate change need to go beyond platitudes and into action.

The Reality of Climate change

In 2009 both India and the United States, along with countries around the world, signed on to an agreement to limit global temperature rise to 2 degrees Celsius. We've already raised the global average temperature by 1 degree, and to limit its doubling requires dramatic cuts in carbon emissions. The latest alarm came from the reputed scientific journal Nature, which pronounced that 82 percent of known global reserves of coal should be left in the ground. For India and China, 66 percent of their known coal reserves should remain unburned. It's a politically untenable target for these emerging economies, but business as usual will raise the planet's temperature by 5 degrees Celsius, effectively leaving an inhabitable planet by the turn of the century.

Obama, in his latest State of the Union address, emphasized a simple fact: 2014 was the warmest year on record, and 14 of the 15 warmest years on record have come in the first 15 years of this century.

The Uttarakhand and Srinagar floods, the multiple cyclones devastating our eastern coast, and the debilitating droughts in central and western India are not freak accidents of nature but powerful reminders that unabated carbon emissions can have serious repercussions. By not applying the lens of climate change when viewing these events, India is locking itself into climate inaction.

"When we think about the future generations and what kind of a world we are going to give them, then there is pressure," Modi said in a news conference with Obama on Sunday. "Global warming is a huge pressure."

This pressure is unabashedly ignored when it comes to exploiting coal reserves for economic growth, as India plans to double its coal production by 2019.

Modi's Make in India campaign is a clarion call for investments from around the world, and to ensure a "business-friendly" environment, a slew of measures are being adopted to systematically dilute norms and policies that safeguard the environment and the rights of people to their land and welfare.

"Growth can't be measured by GDP; it has to make lives better," said Obama in his address to business leaders in India, an indirect contradiction of Modi's economic policies that uphold the GDP supremacy.

The two leaders agreed on phasing out hydrofluorocarbons (HFCs), a greenhouse gas with greater global-warming potential. It is a welcome move, but the real threat of climate change comes from our carbon emissions, and the most important source of carbon-dioxide emissions are coal-based power plants. That is one important reason that President Obama proposed a plan for enforcing pollution standards in power plants in the U.S. that would cut carbon-dioxide emissions by 30 percent below 2005 levels by 2030.

India has no such emission targets, but what is urgently needed is clear commitment in enforcing pollution standards to avoid a brewing health crisis in the country. A recent report substantiates this with numbers that suggest that almost a quarter million people die prematurely from coal-related pollution, a statistic that should have us thinking hard about our energy choices.

A Dearth of Nuance

The Indian media's lack of sophistication on subjects like climate change is appalling. While every twitch by the two leaders got primetime coverage, on the subject of climate change, which featured prominently in Obama's speech, there was hardly a discussion worth noting. The media continues to uncritically toe the line of the government, adopting a highly nationalistic position on climate change that divides the issue along both developmental and post-colonial lines.

The implications of climate change for more than a billion Indians and India's responsibility as the third-largest carbon emitter scream for more attention than climate change gets. The important social and developmental priorities with which India prefaces its climate stance will be under greater pressure if global warming exacerbates, a fact that we fail to see, owing partly to poor debates on the subject in the Indian media.

One hundred ninety-three countries are expected to arrive at a global agreement in Paris this year to tackle climate change. India is predictably a key player in the negotiations, but very little is expected of the country in terms of carbon cuts. While taking on absolute emission targets can potentially be damaging to India's interests, a clear and unambiguous commitment to phasing out coal is in the best interest of the country and the world.

India's ambitious targets for expanding solar energy are welcome, but providing energy access to 300 million Indians living in darkness and safeguarding their lives from climate impacts requires a much more dramatic shift away from coal. That transition can begin now, when all indicators suggest that solar and coal are almost at grid parity. With depreciating prices of solar, the smarter economic choice, as some Indian businessmen have already realized, is to invest in long-term solar and other clean-energy technologies.

The NamObama phenomenon has already got the stock markets for solar energy roaring, and with climate change back in the spotlight, one can hope that there will be a greater public discourse in India on the energy choices of our future.