Optical illusions reflect limitations in our perception of physical reality. But what really is physical reality? While dozens of philosophers have struggled for millennia with attempts to directly answer this question, modern science settled on a more modest goal -- how can we explain reality's behavior? More specifically, to identify those laws of nature that rule the cosmos and all phenomena within it. Admittedly, this search for a "theory of everything" in itself implicitly assumes the existence of some objective physical reality.

The famous mathematical physicist Roger Penrose even suggests that we have to explain not just one world, but three, with three mysteries interconnecting those worlds (Figure 1). First, there is the physical world, where our actual homes, our home planet, our home galaxy, and the large-scale structure of our universe reside. The second is the mental world of our conscious perceptions. This is the world that contains love, fear, the pleasures of good food and wine, and indeed optical illusions. Finally, there is the world of mathematical forms (for historical reasons, sometimes referred to as the "Platonic" world). This is the motherland of mathematics, where you will find such entities as prime numbers, the Pythagorean Theorem, the Golden Ratio, and mathematical models predicting election results.

We have discovered that the world of mathematics provides explanations of and predictions for the behavior of the physical world. -- Mario Livio

Irrespective, however, of whether one adopts this extreme point of view, in which the building blocks of reality are perceived as being abstract concepts of mathematics, there is very little doubt that Penrose's three "worlds" are inextricably and cyclically connected. Each one exists (in some sense at least) and is the source from which the next one sprouts. At the same time, it is clear that a true picture of reality should encompass all of these three worlds in one all-embracing cosmic unity. This becomes particularly evident when illuminated by the insights gained from quantum mechanics -- the theory of the subatomic world. In quantum mechanics, the observer is an integral part of the reality being observed. Hence, as physics Nobel laureate Eugene Wigner told me many years ago: "If you want to write down a wave function that describes the universe, please make sure that the description includes you as well!" 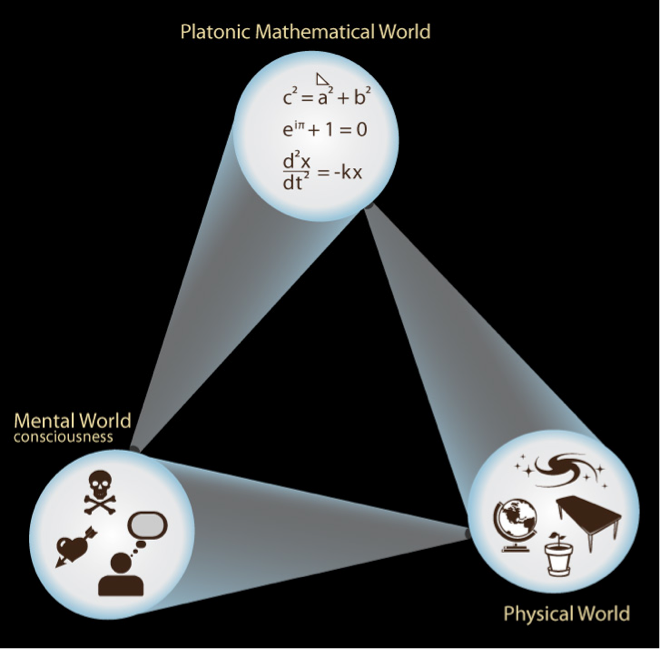