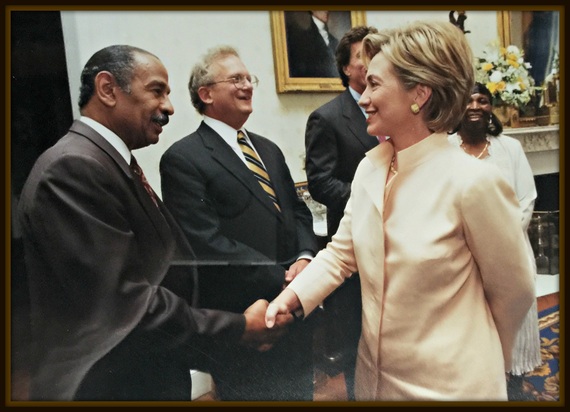 The hard truth we must realize is that we have a long way to go to make equal opportunity a reality in America - whether we're talking job creation, reforming our criminal justice system or even providing safe drinking water.

We need leaders who care about all communities, that have credible plans for progress, and who have experience fighting hard battles. Hillary Clinton exemplifies that kind of leadership, and that's why I am proud to support her for president.

Earlier this month, Hillary Clinton came to Flint and she didn't mince words. She told the country that what's happening in Flint is immoral. And she's right. Sadly, Flint is far from an outlier. From Baltimore, Maryland to Richmond, California, to Denmark, South Carolina, there are many other "Flints" where the local government failed to meet its basic obligation to protect its citizens. Turning a blind eye to crumbling infrastructure that exposes children to lead poisoning is just wrong in a country like the United States.

Last week, Hillary announced the economic component of her "Breaking Every Barrier" Agenda, which demonstrates her commitment to improving impoverished communities. Her plan will break down the barriers that have held communities of color back and expand economic opportunities for all.

Hillary's plan would provide the funding and partnerships needed to modernize our outdated infrastructure by investing $50 billion in underserved communities that have been neglected for too long. This "Infrastructure for Opportunity" fund will create the kinds of good-paying jobs that support a thriving middle class.

Hillary also knows we need to reform our broken criminal justice system. In her first major policy speech of this campaign, she announced her plan to end the era of mass incarceration in this country that has broken up so many communities of color, repair the trust between law enforcement and the communities they serve, and ease the transition of ex-offenders back into society.

I support Hillary because of her leadership to improve our schools and educational system. She truly understands that every child should be guaranteed a high-quality education that will serve them well in their futures. From her early days at the Children's Defense fund to being the first lady of Arkansas, to her time as Senator of New York, Hillary has worked hard her entire career to reform public schools and level the playing field for America's children.

In too many urban school districts like Detroit, children and instructors must teach and learn in dilapidated buildings with unsafe, unsanitary, and unacceptable conditions. A child can't focus when he or she is cold, hungry or sick. Hillary knows that too, which is why her plan will create "Modernize Every School Bonds" to connect school districts with additional resources they need to build safe classrooms that are up to code.

The agenda Hillary has put forward is a blueprint for real advancement. She has been at the forefront of the fight for justice her entire career and understands what is at stake. In order to build upon President Obama's progress, we simply cannot afford to have someone in the White House who takes us backward. Hillary is the only candidate with comprehensive policy plans that will get help to the communities that need it most and has the practical experience to get the job done.

As she showed us when she came to Flint, Hillary is committed to fighting for justice for all Americans, not just the wealthy few. That's the kind of leader - the kind of president - we all need and deserve. That's why I'm With Her.