My 81-year-old mother has been an advocate for equality for as long as I can remember, so when my son Jason first told me that he's gay, I had absolutely no qualms about how my parents would react. In fact, Mom and I had had the "do you think Jace is...?" conversation some years earlier. It remains the briefest conversation I've ever had with my mother.

"Well, when he does, tell him we love him too."

Jason's announcement at age 15 was met with hugs and high fives and a mini pride parade in our living room. Our family and friends showered him with love, reveling in the good news that this sweet child was embracing an honest, happy, and sunlit life.

Jace noticed that his elderly grandparents were among his most vocal supporters. He knew that their joy for him was real, and it meant the world to him.

For Christmas that year I gave Mom a silver PFLAG pin. It had a simple, lovely design: a triangle intersecting a heart, like the world's best Venn diagram. She loved what it stood for and wore it everywhere -- even to church. Especially to church.

The first time she wore the pin, someone asked her about it. She called me from Florida to admit, "I wasn't sure what to say."

"How about, 'It's the symbol for PFLAG -- Parents, Friends and Families of Lesbians and Gays. I wear it because my grandson Jason, whom I adore, is gay.'"

I could tell that that made her nervous. "I'm really just supposed to tell people that Jason is, you know...." This time I waited for her, but she whispered it: "Gay."

"I said it aloud," she argued.

"Nope," I said. "You said it the way some people say 'cancer,' like if they say it too loudly, they might catch it."

Mom was affronted. "I did not say it that way!"

"Yeah, you did. But you're not the only one who whispers it. A lot of people do that."

I'd recently had lunch with a woman who'd done the exact same thing when talking about an adored friend from college: "He's... gay." The word had been barely voiced, and she'd leaned way in to say it. It had struck me as odd because I knew that she's an ally.

As I recounted this story to my mom, I realized that whispering the word "gay" is a learned behavior from a time when being closeted was the norm, when a loved one's safety depended on secrecy and silence. But times had changed, and the implication that being gay is something shameful, something to be hidden, had to stop.

Mom was upset. "I didn't realize I was doing that!"

"You're not a bad person," I quickly reassured her. "You just learned, somewhere, to say it that way, and now you've got to learn not to do that. Jason's not hiding, not from anyone. You don't need to worry that someone will overhear you. In fact, you should want the whole world to hear how much you love your grandson."

"Then you have to remember that things are getting better because of the courage of people like Jace who speak up and say, 'I'm gay,'" I told her. "As straight allies we have to speak up too. So when people ask you about your pin, you smile and look them straight in the eye, and in round, clear tones you tell them about PFLAG and say, 'My grandson Jason is gay, and I love him very much.' And you never, ever whisper when you say 'gay.' Never again."

"I won't," she promised, completely on board my mission-train.

"It takes practice to break a habit. 'My grandson is gay, and I love him very much.' Just like that elocution scene in Singing in the Rain. 'Round tones, round tones!'" I imitated the posh accent of Lina Lamont's beleaguered instructor.

My mom laughed again. "My grandson is gay, and I love him very much."

"Louder!" I morphed into a drill sergeant.

"My grandson is gay, and I love him very much," Mom shouted back at me over the phone, and we laughed together.

"Perfect," I said. "And then you go on, and you tell them all about Jace, how he's doing in school, his current acting project, how much you love his boyfriend, then segue into news about your other grandchildren, and maybe they'll see that Jason's no different from Melanie or Jack or Marlise."

"He is no different from Melanie or Jack or Marlise," she said, indignant.

A few days later Mom called to report: "Someone asked about my pin, and I did what you said! And her mouth dropped open in shock! So I kept going, and I talked about Jace, then about Jack and Marlise, and I talked and talked until the glazed look left her eyes, and I think maybe she got it!" She laughed. "That was fun. I can't wait until next Sunday."

Fast-forward to this past year, when Mom -- as usual -- volunteered to work for Equality Florida at the Harvey Milk Festival. I wandered off to explore, and when I came back I found my dad sitting alone behind the table.

Smiling, Dad pointed out into the crowd.

I turned, and there was my 80-something mother, holding a clipboard and preaching the importance of joining Equality Florida to a bemused group of men.

In round, clear tones. 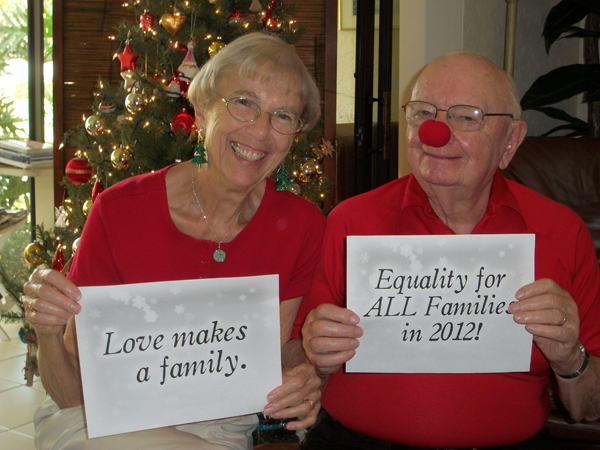