A woman is getting a taste of internet fame after posting a photo on Twitter of what looks like the longest Cheeto ever found in captivity.

Yes, we know Cheetos aren’t actual animals, but this one is so big, it seems like a snake of some sort.

Jessica Rupie found the supersized snack on Friday in a bag she purchased in her home town of Murfreesboro, Tennessee, according to roommate Rue Lawrence.

“[Jessica] got the bag of Cheetos at Walgreens, and we opened the bag and couldn’t stop laughing,” Lawrence told HuffPost.

Lawrence photographed the extra-long Cheeto and posted it for posterity on Twitter.

MY ROOMMATE JUST PULLED THIS LONG ASS CHEETO OUT OF THIS TINY BAG. IM CRYING pic.twitter.com/UVEzrfnN6J

Lawrence said the very long Cheeto took up a lot of space in the bag.

“There were a few other little stragglers. But it rested comfortably between the top and bottom corner of the bag,” she said. “We didn’t notice until we got to the car. It was a medium-sized Cheetos bag and it fit perfectly.

“I think the picture I took makes the bag look a little smaller than it was but it definitely fit.”

The colossal Cheeto is actually made up of a few that managed to stick together end on end (on end).

“You can see the small dents where the Cheetos begin and end,” Lawrence said.

Frito-Lay did not immediately return a request for comment.

Rupie and Lawrence briefly thought about saving it, but Rupie’s hunger won out and she ate the entire thing.

“I didn’t even get to taste the magic Cheeto,” Lawrence lamented.

Lawrence’s mood turned even more anguished when she was informed that a Cheeto shaped like Harambe, the deceased gorilla from the Cincinnati Zoo, was recently put up for sale on eBay for the exhorbitant price of $100,000. 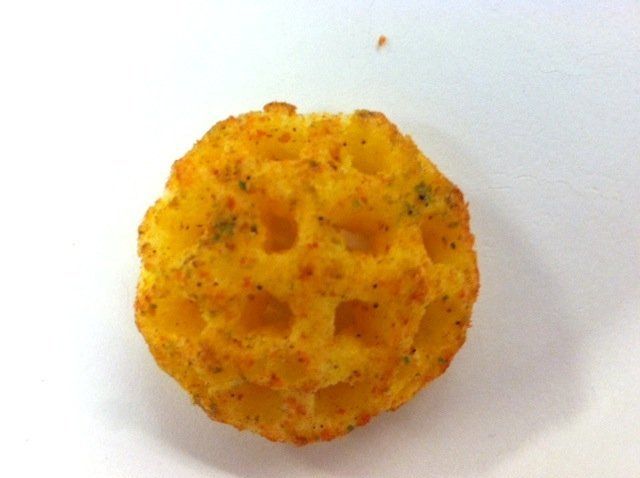 1 / 11
Chipotle Cheddar: Cheezy Salsa Mix
The chipotle flavor is immediately evident in this waffle-shaped Cheeto. The jury is out on whether that is a good thing -- if you want a slightly smoky taste to your Cheetos, then you may be pleased. It is strong enough that it clouds the other flavors, though.