He loves the perks of being really, really rich, like flying to campaign events in one of his own private jets, which means he blithely skips those annoying airport security lines that non-billionaires must endure. He enjoys kicking back in one of his five houses, including the 58-bedroom Mar-A-Lago mansion, where the $600,000 annual property taxes are three times the entire cost of an average American home. And, of course, Trump relishes the power he has to tell workers, “You’re fired.”

Born into wealth, Trump attended private schools and inherited $40 million when he was just 28 years old. He didn’t spend summers volunteering for Habitat for Humanity in Appalachia. He didn’t take a gap year to put that fancy private school education to use tutoring inner city kids. So, frankly, it’s easy to understand why he opposes raising the minimum wage. This guy who was born with a really, really silver spoon in his mouth doesn’t have a clue what living on $7.25 an hour means. 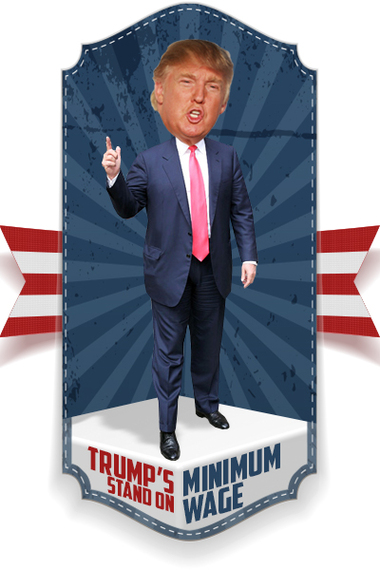 Like all robber barons, Trump can’t spare a dime. He made that clear in the November Fox News debate. Trump said $7.25 is too much, too high a wage for the guy working two minimum-wage jobs to keep a roof over his widowed mother’s head or the single mother working 60 hours a week at two fast food joints to support her child.

“Taxes too high, wages too high,” Trump said later to explain his position that America couldn’t compete against other nations if U.S. workers are paid a living wage.

To put that in perspective, the annual income of a minimum-wage worker laboring full time for a year without a single sick day or vacation day is $15,080. That is $920 short of the $16,000 in annual fees required of members at Trump’s Mar-A-Lago Club in Florida.

But Trump thinks wages are too high. He has no idea what a $7.25-an-hour life is.

After the debate, in an interview on MSNBC’s “Morning Joe,” Trump went further, making it clear, that as a rich man, he didn’t care, either, that all workers’ wages had stagnated for years even as their productivity steadily rose.

No worker should get a raise, he told “Morning Joe” co-host Mika Brzezinski.

“Our wages are too high. We have to compete with other countries,” the really, really rich man told Brzezinski.

The guy born to wealth and privilege said that the skilled electrician who is still paying off his trade school loans and who goes out in ice storms to repair lines for $58,000 a year is paid too much. The rich guy whose father handed him a $1 million loan to start his business says that the woman who scrimped and strived to be the first in her family to graduate from college and now works as an emergency room nurse saving lives makes too much at $68,000 a year.

Their wages are too high, Trump said. Gotta cut ‘em to compete with China. A race to the bottom is what Trump has in mind. For working people, that is. Not for really, really rich guys like him. They’re exempted, of course. Like they’re exempted from those annoying airport security lines.

Trump’s reasoning is the same as Mitt Romney’s. Remember Mitt “Corporations are people, my friend” Romney? The two rich guys have the same values. That is, they value corporations over people.

Trump explained shortly after the November debate that he intended to stiff the working poor because business was more important to him. He would stand strong against raising the minimum wage, he said, because “our country is losing business.”

Trump didn’t say that CEO million-dollar paychecks should be cut. He didn’t say the tens of billions handed out in Wall Street bonuses should be eliminated. No way. Those are the perks of his buddies, the rich guys he hangs out with at Mar-A-Lago. He specified only that the pay of poor people was too high.

All that big money at the top could actually be meaningful to minimum-wage workers. For example, in 2014, the $28.5 billion in bonuses handed out on Wall Street was twice the annual pay for the 1 million Americans who worked full-time at the $7.25 minimum wage.

The 167,800 Wall Streeters who grabbed those billions actually did pretty crappy work too. Wall Street profits declined 4.5 percent. That’s the kind of job that would get a minimum-wage worker fired, not rewarded.

So when the rich like Trump do badly, they get more money. When low-wage workers faithfully perform their jobs, Trump says, “Give them less money!”

Now that the really, really rich guy is the presumptive nominee, however, he’s double-talking. On NBC’s “Meet The Press,” he told Chuck Todd that he’s become sympathetic to minimum wage workers, but he’s not going to do anything about their plight. Here is what he said:

“I have seen what's going on. And I don't know how people make it on $7.25 an hour. Now, with that being said, I would like to see an increase of some magnitude. But I'd rather leave it to the states. Let the states decide.”

So, ok, it’s hard. Some minimum wage workers are homeless. They work, but sleep on the street. Virtually all survive only with the help of taxpayer-funded public benefits like food stamps, Medicaid and public housing. So they’re the victims of scorn, despite laboring full-time.

Maybe it’s not right. But a President Donald Trump is not going to lift a finger to help minimum wage workers. If workers happen to live in a state that wants to let corporations exploit employees, a President Trump wouldn’t intervene to save workers’ day.

This is a really, really rich guy completely oblivious to the anxieties of American families – including the ultimate nightmare of a boss shouting, “You’re fired!” This is a guy who told a reporter that no one has done as much for equality as he has because he opened his Mar-A-Lago Club to everyone – a club requiring a $100,000 initiation fee – a fee nearly twice the average annual earnings of an American worker.

This is not a man of the people. This is no working man’s champion. Just like Mitt, this is a really, really rich guy for rich guys.