When I met David Abrams at an Iraq War Symposium at the University of Wisconsin-Oshkosh last fall, the two of us really didn't bond as we should have. That's too bad because the connections we share with our respective wars, our similar roles, and our resultant writing are so obvious and evident. But the best we could do that November day was shake hands, share a couple quick anecdotes about life as a military journalist in the rear during a war, and exchange books.

I've finally gotten around to reading David Abrams' novel Fobbit his response to his war experience (DEROS Vietnam is my response to mine) and am even more struck by the similarities in our experiences, and in our fictional re-telling of them, even though more than 30 years separate our respective tours of duty. 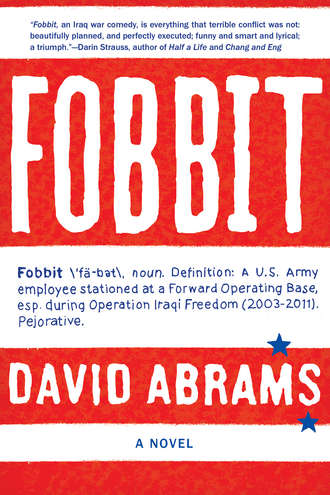 What I most appreciate about Fobbit -- and what I infused much of DEROS Vietnam with -- is the dark, gallows humor that by and large only soldiers can truly appreciate. They know how precious laughter is, and how much it's needed in order to survive the insanity of war. Akin to Catch-22 and M*A*S*H, Fobbit uses pathos and dark humor to present the ugly and banal truth of life in the modern-day war zone. In Abrams' war, the United States military dots the Iraq landscape with Forward Operating Bases ("FOBs") like FOB Triumph where "fobbits" avoid combat in headquarters buildings, replete with laptop computers and espresso machines. The book follows a dyed-in-the-wool Staff Sergeant (Chance Gooding) and his fellow fobbits in the Army public affairs office who craft press releases intended to explain to the American public what in the hell is going on in Iraq. Each of the book's chapters brings fresh perspective on the problems festering at FOB Triumph.

For Vietnam vets like me there was a different pejorative -- "REMF," which stands for "Rear Echelon Mother-F'er," There were more of us than there were combat soldiers in Vietnam, but our war was less intense and much less heroic. But it was still a war, and it changed us forever. Abrams makes this point in Fobbit -- "In another war, REMF was the preferred term ... but now, in this modern asymmetric theater of operations, there was no 'rear' echelon elite sitting in their motherf'ing safe-from-harm shelter. But, hey, that was okay by them. The Fobbits told themselves, broken-record style, they Just. Did. Not. Give. A Shit."

That was we REMFs too. Again, Abrams: "Supply clerks, motor pool mechanics, cooks, mail sorters, lawyers, trombone players, logisticians: Fobbits, one and all. They didn't give a shit about appearances. They were all about making it out of Iraq in one piece."

Abrams' novel and my collection of short stories are both labeled as a work of fiction, but obviously we've both recycled our own experiences into our works. The names, as I say in the introduction to DEROS Vietnam, have been changed to protect the innocent, and the guilty. Even though our rear echelon war experiences are separated by more than 30 years, both David Abrams and I have set fire to the truth in order to tell it.