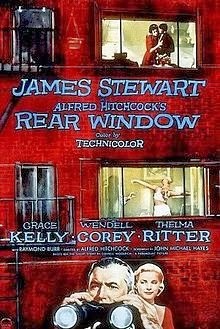 Should artists be called on to solve murders? In the classic romantic conception, the artist is an outsider, a wounded soul whose recompense is the pleasure of creation. While others live their lives, the artistic personality derives pleasure from recording it. Everything is gris for the mill. What's painful for others is merely a diary entry and if beauty is truth as the poet says, then artists who are natural voyeurs and whose one degree of separation confers on them a certain objectivity surely make good detectives. This is the case for L.B. Jefferies (James Stewart) in Rear Window, which is one of today's offerings in the current Hitchcock retrospective at Film Forum. "Jeff" is a photojournalist who's been put out of commission by a broken leg. The injury sets up the story line, but we are given hints that the wound is symbolic of something more profound that has always sidelined him. Now with his ability to get around impaired, he has nothing to do but look out his window at the lives of others. Urban settings are filled with windows that are like televisions screens, but it's as if Jeff were on an acid trip watching reality TV. Jeff's fiancé Lisa (Grace Kelly) whose only problem is that she's everything a man could possibly want (she arrives with lobster from "21")recedes before him as he becomes captivated by a pair of newlyweds, who are constantly pulling down their shades and a Miss Lonelyheart (Judith Evelyn), a lonely young woman who serves candlelit dinners to imaginary male callers. Rear Window takes place during a New York Heat wave and we even have a couple sleeping out on their fire escape with an alarm clock. Among the cast of characters is a convalescing woman (Irene Winston) and her husband Lars Thorwald (Raymond Burr) who chops her into little pieces. Stella (Thelma Ritter) the nurse sent by Jeff's insurance company is there to help him with his leg, but she's really the resident shrink. In a Greek tragedy she'd have been the seer. She tells Jeff,

"We've become a race of peeping toms. People ought to go out of each other's house and look in."

Significantly many of the people who Jeff is spying on are suffering from a complementary disorder They're exhibitionists to his voyeur. Jeff shares his Greenwich Village courtyard (which resembles bohemian redoubts like Patchin Place, the home of both E.E. Cummings and Djuna Barnes) with Miss Torso (Georgine Darcy) a ballerina who parades around in her underwear, a temperamental musician (Ross Bagdasian) who drunkenly swipes his scores off his keyboard and a sunbathing sculptress. Besides manifesting opposing spectrums of the same pathology Jeff and his subjects, at least initially, are united in the pursuit of art at the expense of life, which may account for the fact that though the courtyard is reminiscent of the Village, it also exudes the artificiality of a stage set. Rear Window like North by Northwest and Strangers on a Train, is a thriller that's also a romantic comedy and there's something almost Shakespearean about the way it flips so effortlessly from tragedy to comedy, from hi to lo. The problems Jeff and his esthetically inclined friends have with life are resolved faster than you can ask, who done it?