Over the next ten years, President Obama's proposed budget, which includes $1.1 trillion in spending cuts, is projected to cut the deficit by nearly half, reducing it by $626 billion, from $1.33 trillion to $704 billion. Obama's budget includes more than $4 trillion in balanced deficit reduction so that, by 2018, the deficit will be less than 3 percent of GDP. For every $1 in new revenue generated from the new taxes on those making over $250,000 per year, and from closing corporate loopholes, the budget has $2.50 in spending cuts, including the deficit reduction enacted over the last year. 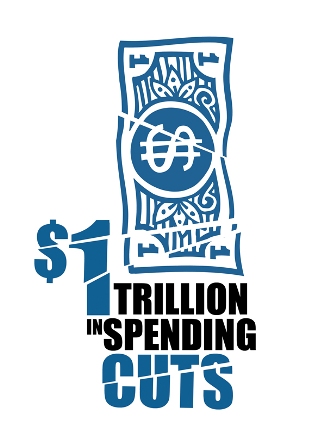 The $1 trillion in spending cuts includes savings of $350 billion from defense over the next decade -- the first defense cut since the 1990s. In addition to deficit reduction, Obama plans to use part of these savings from bringing troops home to pay for much-needed infrastructure improvements, such as modernizing the nation's transportation network, which will create hundreds of thousands of jobs.

According to the White House, the president's 2013 budget "would bring discretionary spending to its lowest level as a share of the economy since Dwight D. Eisenhower sat in the Oval Office." Obama specifically identifies 210 places where programs would be cut or eliminated, for savings of $520 billion over a decade.

So far, Barack Obama has signed $2 trillion of spending cuts into law, and spending under the Obama administration has grown more slowly than under any president in sixty years. In fact, federal spending grew about six times faster under Reagan and Bush than it has grown under Obama.

Now that's a record even The Gipper would be proud of!

I encourage you to join in the conversation and share your thoughts on Reason #22 or your own reasons by visiting 52 Reasons to Vote for Obama on Facebook... I'd love to hear from you!