"Facebook is so annoying." How many times have you heard that sentiment this past year? We bet a lot, because more and more people seem to be getting tired of the social media platform, especially young people.

We've noticed a nationwide annoyance with Facebook over 2013. The company even admitted in October that younger teens were using the network less frequently on a daily basis. Here are 11 reasons that might convince you to let your Facebook account go in 2014.

1. Nobody actually wants to just read about what you're doing anymore.

Think about it: What sounds more appealing (and believable)? Reading a status that says, "I'm currently hanging out with Will Smith!" or a picture of that person actually posing with Smith? A photo is definitely more engaging. Here's the most-liked Instagram picture of 2013: Justin Bieber's snap with Smith.

When TIME interviewed teenagers about their social media use in March, 16-year-old Hamp Briley explained that kids these days don't have time for Facebook: "Twitter’s all statuses, Instagram’s all pictures. People like to do more specific things like that instead of being on just Facebook.”

2. Facebook makes it impossible for you to stay "private."

For many valid reasons (think stalker exes or potential employers), some people don't like having their name come up when it's typed into the Facebook search bar. However, most users this year found problems with changes to privacy settings. For one, Facebook removed the option to keep your name hidden when people search you. They also forced people to control their privacy settings on a cumbersome item-by-item basis. Today, the only way to make sure certain people can't access your profile is to block them. Or alter your name so it doesn't appear when people search your real one. Or, of course, quit Facebook entirely.

3. Your parents (and even grandparents) are now watching your every move. 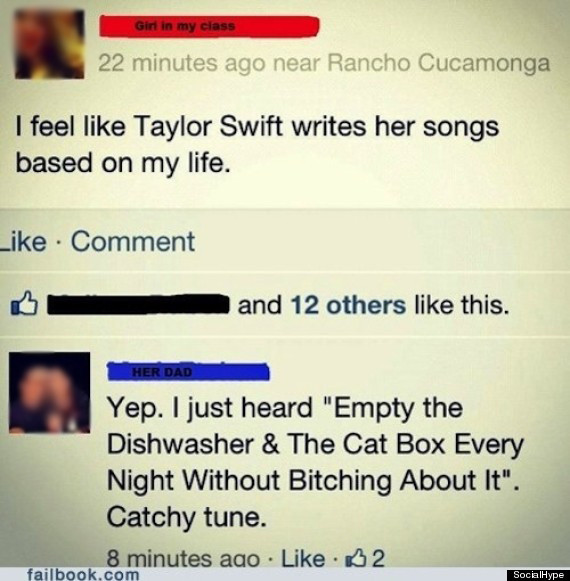 This year seemed to be the year everyone's mom, dad, grandmother and great aunt got hooked on Facebook. And that meant every time you posted a status about something innocuous, these Facebook novices started breathing down your neck the minute you hit "post." We get enough scolding from our parents "IRL" -- no need to let it trickle onto a social media site where our friends can laugh at our familial bickering.

4. Or they're posting photos of you that you would never want anyone to see 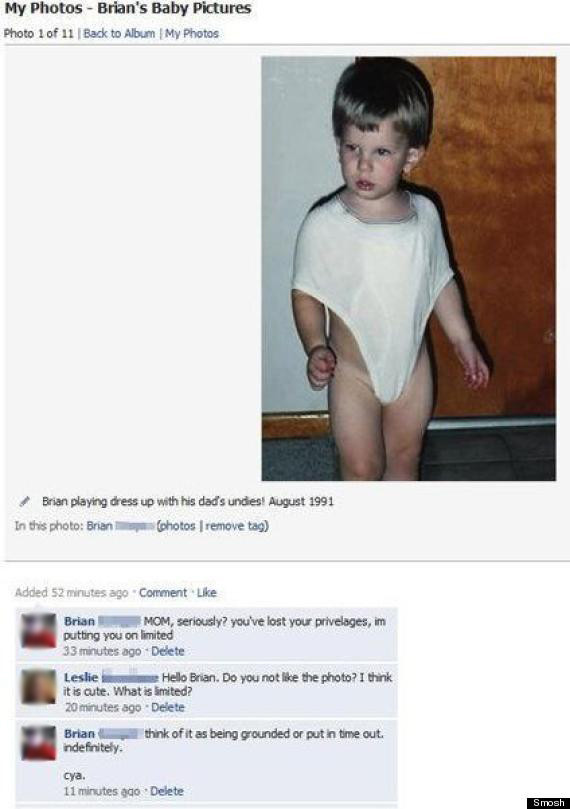 What's worse than getting no "likes" on an Instagram photo you posted? Checking your Facebook and realizing that a horribly embarrassing photo of you that your mom posted is getting over 50 "likes," along with some pretty serious mockery in the comments section.

5. Facebook is even keeping track of what you don't say.

You may have been happy you didn't post that one over-share about your extended trip to the bathroom the other day, but Facebook may have a record of exactly what you typed and what time you were about to publish it. This month, Facebook released a study revealing that they were undergoing a new type of data collection in which they were tracking when people typed content out and then removed it without publishing. Their mission is to understand why users "self-censor" themselves in updates. According to Facebook data scientist Sauvik Das, a "self-censored update" is "an entry into either [a status update or comment box] of more than five characters that was typed out but not submitted for at least the next 10 minutes."

6. Facebook makes you feel less positive about your life. 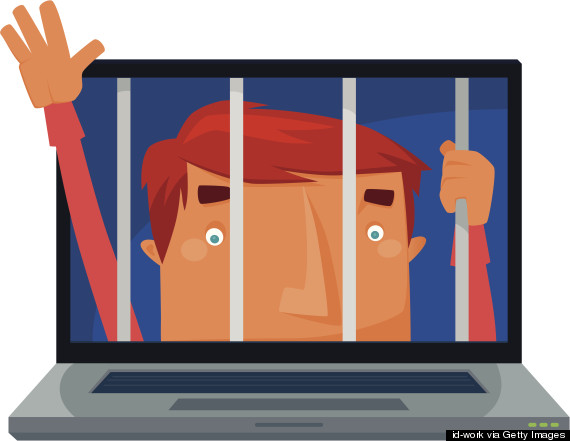 Even though the purpose of Facebook is effectively to reveal details about everything and anything you do, access to this knowledge could take a toll on your mental well-being. A recent study done by the Department of Behavioral Science at the Utah Valley University discovered that heavy Facebook users aren't the happiest people out there. The researchers found that just using Facebook makes you view your life more negatively. Of 400 students questioned, "those who have used Facebook longer agreed more that others were happier, and agreed less that life is fair, and those spending more time on Facebook each week agreed more that others were happier and had better lives."

7. The "friend suggestions" tell you to befriend people you don't even know.

Facebook's "friend suggestions" algorithm needs some work, because these days we're discovering that your potential "friends" are people we only know through someone else, or someone we haven't even met at all. If you want people to stop using a platform that is supposed to connect them and bring them together with the people they care about, you should definitely adopt Facebook's strategy of trying to get you to care about the lives of complete strangers. 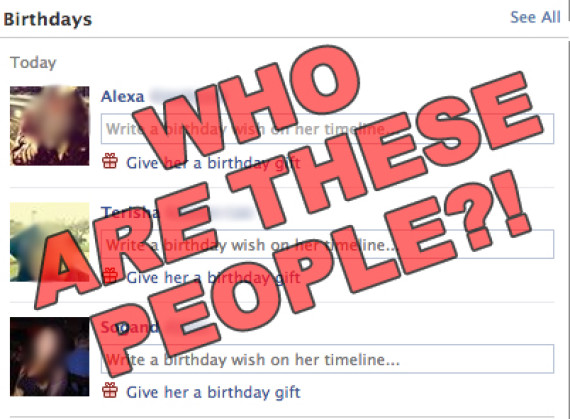 It starts to get kind of weird when you check the birthdays for the day and don't remember who any of the five people are. How do you know them? Are they some random person you met at a bar in college one night, and in a drunken stupor decided to "add on Facebook"? Probably. Do you need to know that this person is moving to California this week? More importantly, do you care? Nope. It could be time to overhaul your friends list. Or maybe it's time to realize that your Facebook account is being used pretty much entirely to keep tabs on these kinds of strangers.

9. Your friends keep announcing their engagements. 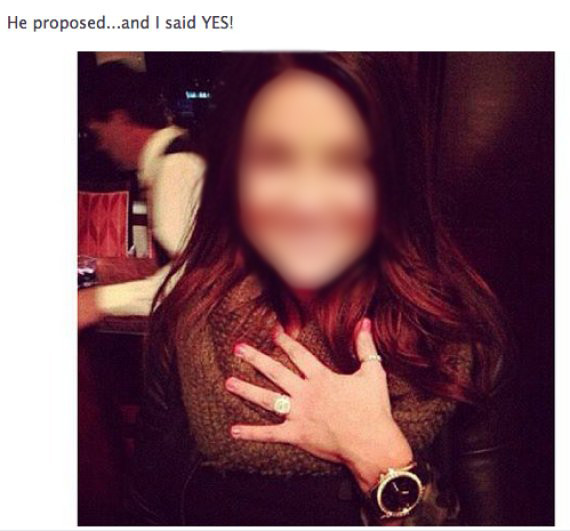 There's nothing more obnoxious than being a busy twentysomething and starting to see all of your friends post statuses about getting engaged. While you are happy for them and wish them the best in their prospects for a lasting marriage, the bombardment of status updates is starting to make you feel like something is wrong with your love life. Why aren't you getting married? What is wrong with you? Why the hell do you need to be thinking about marriage right now?! Once that anxiety subsides, you realize you have to endure continued updates on their wedding preparation. You could unsubscribe to this friend, but you know more are coming.

10. The excessive ads are about to ruin the whole experience.

If the regular sponsored ads hadn't already destroyed Facebook for you -- seriously, why the hell do you think you're obsessed with guitars and horses -- the upcoming launch of video ads will definitely do the trick. Facebook started testing these annoying ads out in December. They'll soon be coming to a newsfeed near you, automatically playing a video as you scroll through. However, the sound will only play if you click or tap on it. The good news? There is a way to block these ads from automatically playing. You just have to use a Flash blocker.


11. It makes getting over a breakup really hard.

Back in the days before social media, people broke up and never called the person again. It was relatively simple to move on (providing you weren't forced to physically see the person on a day-to-day basis). But today, being able to have constant access to your ex's timeline can easily cause serious obsessive tendencies and behavior. Samuel Axon at Mashable accurately summed up how Facebook makes breakups harder, because the platform makes your change in relationship status public and it allows you to see all the action your ex is getting.

Correction: An earlier version of this story misattributed a study on Facebook to the University of Utah. It was conducted by the Utah Valley University.