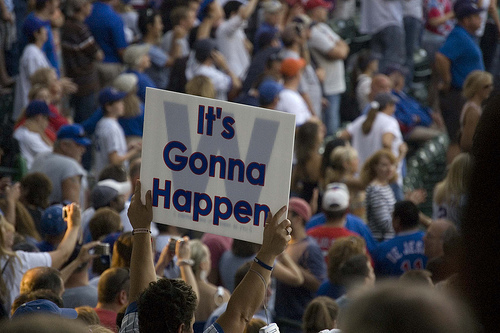 It's been hard to ignore the excitement of Cubs fans out there. Sure, there are plenty of die-hards who have always been loyal fans, but the bandwagon jumpers far outweigh the real fanatics of the North Side ball club. I myself used to live in the shadow of Wrigley Field and absolutely love the town, the neighborhood and the fans. And I consider myself a casual fan*, until the calendar hits October. At which point, I become a fan of whoever the Cubs are playing. Why, you ask? Here are my five-and-a-half reasons:

1. The mystique. Everybody loves a loser. Why do we remember the name of five-time presidential candidate Ralph Nader or Skippy from Family Ties? They are lovable losers. The Red Sox used to have this mystique until they messed it all up by winning the World Series, not once, but thrice! Instead of a team that was sort of cute with their continual postseason choke jobs, they became a genuine hated rival. And now, as far as I'm concerned, the Red Sox might as well be the Yankees.

2. The hope for the future. Of course, the cameras love the rube who holds up the hand-painted "It's gonna happen" sign. What signs are Cubs fans supposed to bring to the ballpark if they win the whole thing? "It just happened" doesn't quite have the same ring to it.

3. Laws of physics. Here's a seventh grade science recap.** There are two types of energy: potential energy and kinetic energy. Maximum potential energy is what you get at the top of a rollercoaster when you are about start the descent. At that point, your serotonin levels peak and the rest of the downhill journey is pretty ho-hum to our brains. Well, Cubs fans have been at the top of the rollercoaster for more than 100 years. All they know is the natural high of potential energy and breaking this into kinetic energy could turn them into cocky Red Sox, Yankees or whatever fans you hate the most. And this could be devastating for the ecosystem of baseball fandom.

4. Tradition. Baseball is a game of tradition and the Cubs losing is something that traditionally happens. We've already lost the Red Sox and losing the Cubs would mean the longest standing losers would be Cleveland. And they have LeBron, so they don't need this honor.

5. The city of Chicago will burn to the ground ... again. If there's one thing about Cubs fans: They know how to celebrate. This is a fan base that will drink to a win in April, take a shot for a Cubbie sacrifice bunt, and will gladly toast to next year every October. If the Cubs actually win the World Series -- well, let's just say I don't envy the job of a Chicago firefighter.

And five-and-a-half: The end of the world will be upon us. This is an absolute certainty. So with all of this being said, my brother and I are already planning a road trip to Chi-town just in case the Cubs win because we want to be at the epicenter when the world is wiped out. So if the Cubs do win, it's been nice knowing you. Thanks for reading my blog. And if you do make it through the end of days, my ashes will be scattered in a Waveland Avenue bar.

*By birth, I'm a Minnesota Twins fan first.
**I did zero research on this. I was only recalling chunks of information vaguely recalled for Mrs. Soccoman's seventh grade science class.