Rebeca Seitz's Thursday began like any other lazy summer morning as she and her children sleepily ate their breakfast while watching "Good Morning America's" cheerful programming. But the the day took an unexpected turn for the explicit when a television advertisement featuring a steamy sex scene streamed through her living room.

"The GMA segment went to commercial," the Naples, Fla., mother wrote on her blog. "And then, wham. Confusion. Disbelief. Did that just flash on my TV screen? In front of 8-year-old Andy?!"

The ad in question was for the new ABC drama "Betrayal," and featured a pair of naked-looking actors engaging in some pretty adult behavior. 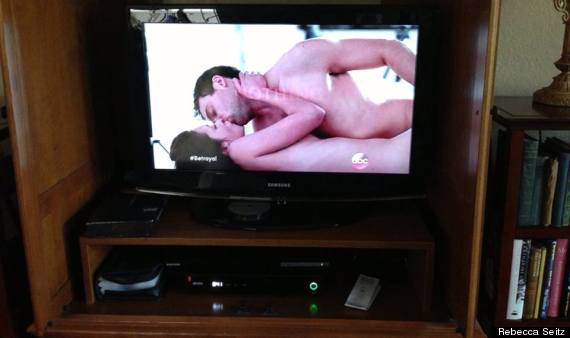 Seitz was infuriated by the scene, especially given the time slot in which it aired.

"This wasn’t primetime. This was a commercial about a primetime show airing while we all enjoy cornflakes and coffee and wish our kiddos a good morning," she wrote on her blog. "My kid saw that ... Not because I took him to a movie wholly inappropriate for his age. Not because I quit parenting and just told him to turn on the TV at 10pm and watch whatever."

“I cannot ever be okay with naked people having sex in the middle of ‘Good Morning America,’” Seitz told The Blaze. “Sex is a beautiful exquisite gift between two people who are married.”

In that interview, Seitz also countered some of the criticisms she received from people who accused her of advocating censorship, and of over-sheltering her child.

She told The Blaze that she was taking a stand against degrading sex, not sex in general, and argued that this type of imagery should not be used to win TV ratings. She has since filed a complaint with the Federal Communications Commission.

Speaking with Glenn Beck, Seitz said that when she posted a picture of the "Betrayal" scene on Facebook, the social media network flagged it for indecency and took it down.

"It’s amazing to me that ABC has lower standards than Facebook does," Beck noted, then commended Seitz for "drawing a line in the sand" and fighting against the people "exposing your children to pornography."

More ads that got people talking: