I walk into Paul Kopeikin's new gallery in West Hollywood and what do I see? I see the fantasies (realities?) of Iran and North Korea. I see Alan Greenspan's testimony that he found a "a flaw in the model ... that defines how the world works." I see the value of my pension plan. I see the image everywhere I go, reflected in everyone's shiny pupils. It's as if it's coming from inside them. I see the paintings of Rebecca Bird. 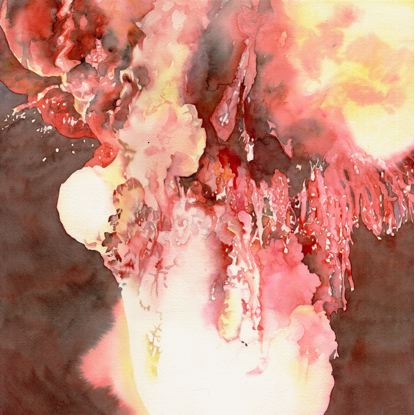 In her current show, "Everything that Ever Existed Still Exists," Bird delicately -- even preciously -- petrifies images of infamous nuclear explosions in paint. The names of the locations are erased, leaving the images just as anonymous as those civilian victims of the bombs or testing sites. While some of the clouds are recognizable, Bird's interpretation of these events captures peacefulness and tragedy, past and present, personal and global, all at once. The show, curated by Fette, one of my favorite art bloggers, runs through April 18, 2009. 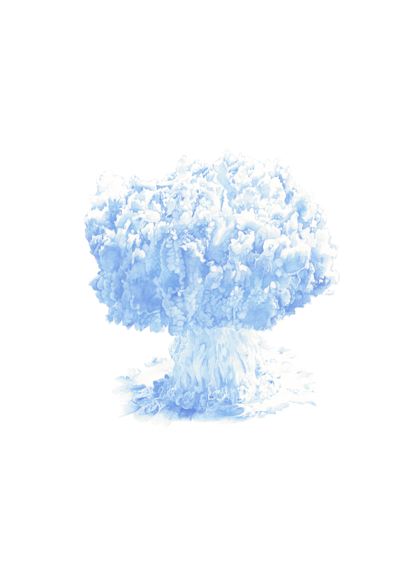 Kimberly Brooks: Aside from picking up any newspaper lately, what was the inspiration behind this body of work?

Rebecca Bird: The impetus for my work usually comes from seeing something surprising, which leads to an inquiry. In this case the moment of surprise happened at New York Public Library picture collection, where I found a group of government photos from the National Archive of nuclear bomb tests.

From the national archive of nuclear bomb tests.

At the time, I was trying to create a visual representation of what an internalized trauma might look like, something hard to explain to anyone who hadn't experienced it. I was looking for imagery that was violent or explosive. I had started working with the subject of explosions very generally. When I first saw these photographs of nuclear bomb tests I realized they had the same barriers to comprehension as any violent event seen from the outside. I felt like I was both the person who is unable to convey their own subjective experience, and the person who can't understand it based on what they see. 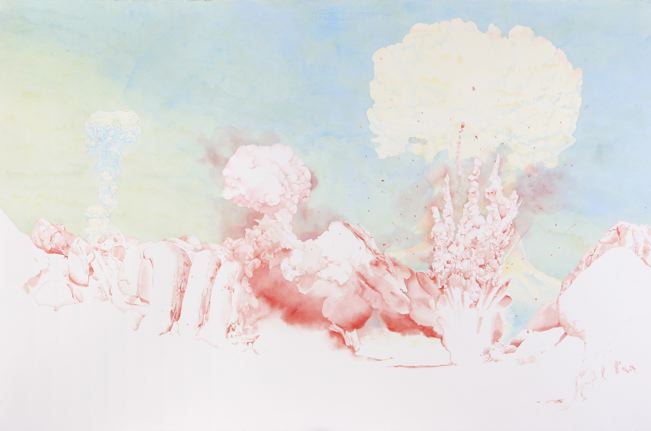 KB: I've always found the images eerily beautiful too. Where does the title of the show, "Everything That Ever Existed Still Exists," come from?

RB: There are two strains of content in the work, one which is about pain on a personal level, and one that is about tragic historic events. Using nuclear explosions as a metaphor for any smaller event is inherently out of proportion, but the lack of proportion is in turn a perfect metaphor for an event which ultimately cannot be measured or communicated. The removal of any indicators of scale or context from the images is important for this reason; the images could be enormous, or microscopic, or happening inside of you.

Everything about how these pictures are painted emphasizes the distance between seeing the images and understanding what they are of; they are hugely destructive explosions, but rendered in precise watercolor. The cool, watery pastel colors are beautiful or nostalgic, and the images are above all very still. It suggests that something can happen very quickly and yet happen forever. 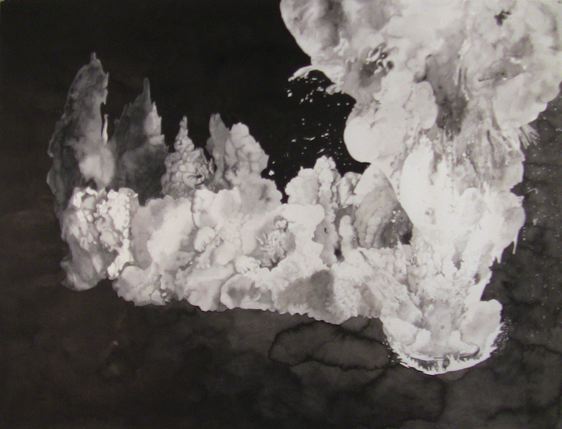 KB: The work looks very layered and detailed. Describe your process of working.

RB: I work very close to the subject that I am painting, often with the object I am painting resting on the page as I work. I start from one end and go to the other, I put in one detail at a time: this means that I am never looking at the whole picture as I work, always at one tiny part of it. In these paintings I go through a process of examining every grain of the photograph without grasping the event pictured as a whole. There is something organic about the way the image grow on the page. 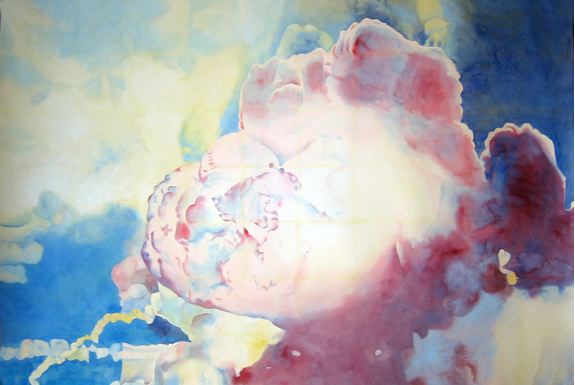 KB: Did you ever feel guilty about painting a devastating historical event in a way that is both beautiful and also personal?

RB: I am always confused when I see news photos of wars and disasters - does seeing a picture of a distant tragedy allow me to empathize with its victims, or does the shock actually numb my response? Given that these events are the sum of many smaller personal tragedies, is it even possible to empathize with every other person? You end up defining suffering in terms of numbers, and scale. Seeing includes a whole range of emotions including guilt. In the face of these events does any single person still matter, whether a victim or an observer?

In these paintings, I want to emphasize the distance between seeing and understanding. When using historical images -- of the atomic cloud over Nagasaki or the attack on Pearl Harbor -- the "name" of the event is not in the title, because giving something a name is another way of not going into the detail of what it means. There is no image that can lead to understanding.

RB: This work was influenced by the use of explosions in movies and comic books to symbolize or simulate catharsis, particularly Katsuhiro Otomo's epic manga and anime "Akira." In "Akira," the end of the known world is mirrored by, and brought about by, the gradual loss of sanity of a teenage boy. The gorgeous, monumental destruction of the climactic sequences are a perfectly overblown metaphor for self-absorbed pain. 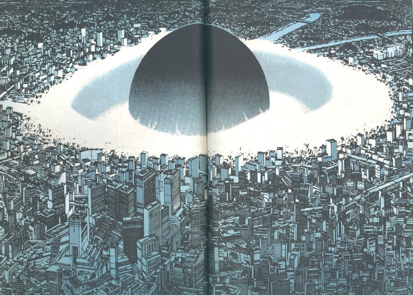 Rebecca Bird graduated from the Cooper Union School of Art in 2000. While a student she received the Ellen Battelle-Stoeckel Fellowship to the Yale Norfolk Summer School in painting. Immediately after graduating she was awarded a Fulbright to study traditional painting techniques in Kanazawa, Japan. She spent one year in Japan before settling in Brooklyn, NY. She has had work in solo and group shows in New York, Seattle, San Francisco, Luzern, Kanazawa, and Beijing. Her solo exhibition "Everything that ever existed still exists" at Kopeikin Gallery in Los Angeles runs from March 14 - April 18, 2009.

First Person Artist is a weekly column by artist Kimberly Brooks in which she provides commentary on the creative process, technology and showcases artists' work from around the world. Come back every Monday for more Kimberly Brooks.