UPDATE: Rebecca Black's music video "Friday" is back online thanks to VEVO: The video has been re-uploaded on "RebeccaBlackOnVEVO's Channel." See it below.

Rebecca Black's "Friday" music video, which racked up over 160 million views on YouTube, has been removed.

-- PREVIOUSLY: The page to Black's official video included a notice that the video is "no longer available due to a copyright claim by Rebecca Black," with a "Sorry about that" from YouTube. A YouTube spokesperson offered TechCrunch the following statement on the matter:

YouTube takes copyright infringement very seriously. When we receive a complaint alleging that a video infringes another person or company’s copyrights, we remove that video. Users who believe that a video was removed in error can appeal the copyright takedown.

"Friday" was recently put behind a paywall and users were asked to pay $2.99 to access the video via YouTube Rentals. Access to the video--without the paywall--was restored, though it appears that the video has since been removed. 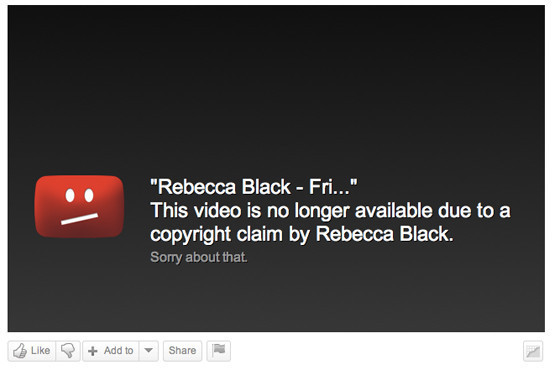 WATCH:
Download
Calling all HuffPost superfans!
Sign up for membership to become a founding member and help shape HuffPost's next chapter
Join HuffPost
Voting Made Easy
Register to vote and apply for an absentee ballot today
Register now