Note: The following post contains a healthy dose of nudity. It may not be the best choice for work environments. 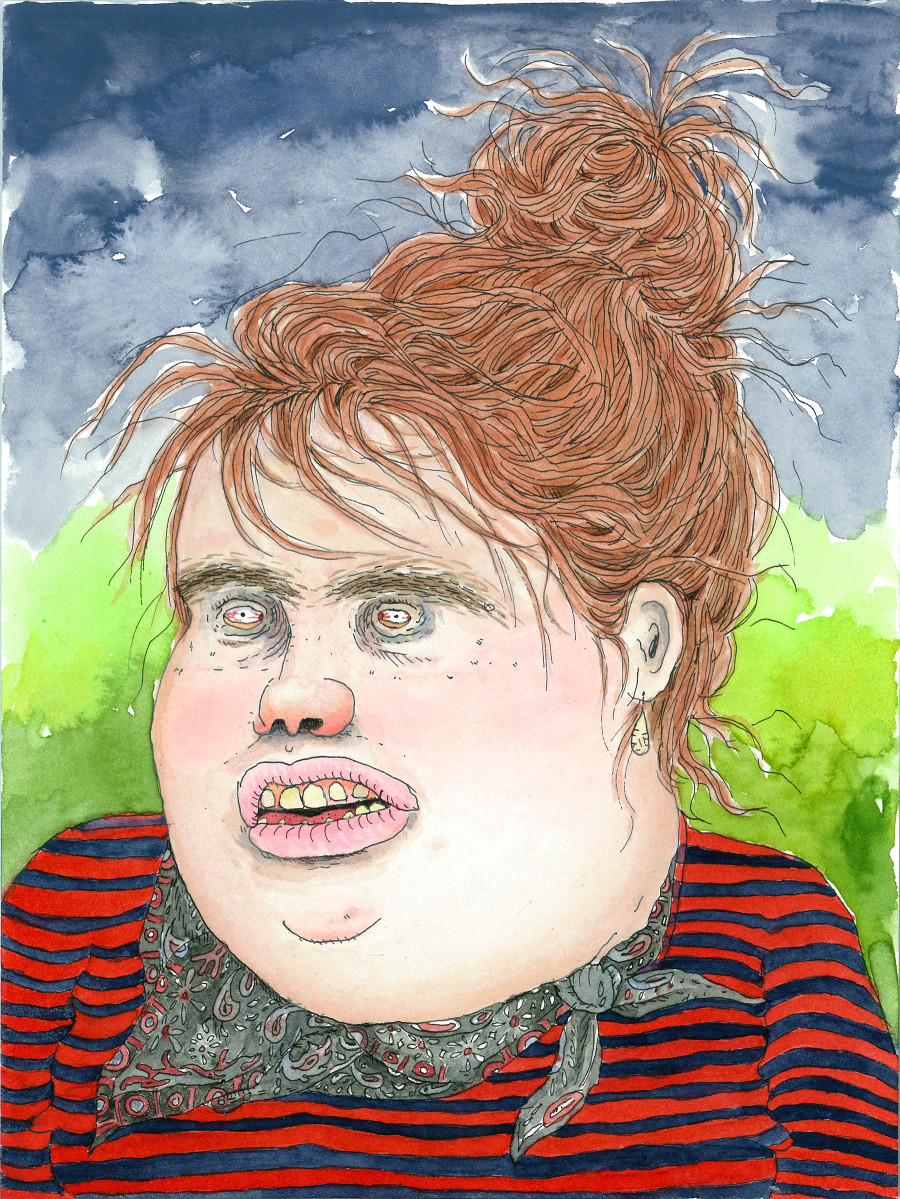 Yaddo Self-Portrait in Striped Shirt, 2013, Ink and watercolor on paper

The artist channels her rural Pennsylvania roots, along with a general predilection for misbehavior, into folksy depictions of life not quite off the grid, but certainly straddling it. Morgan spares no nicety with her motley crew of deviants, rendering every rotting tooth, lip hair, swelling pustule and wayward butt crack in unflinching detail. At once sympathetic and critical, Morgan's depictions, many of which are warped self-portraits, capture the conflicted ways many of us see our hometowns as well as ourselves.

Morgan, like the young doppelgänger of Robert Crumb, makes her subjects at once lovable and repulsive, vulnerable and pervy, abject and all too familiar. Looking at Morgan's unibrowed faces feels like gazing into the mirror at your thirteen-year-old self, locking eyes with someone who, despite your ugly parts and imperfections, wants and needs some serious loving. Mildly disturbing and incredibly hilarious, Morgan's expansive portfolio just might conjure more backwoods beauty than the entire New York art scene combined.

We reached out to Morgan to learn more about her work. 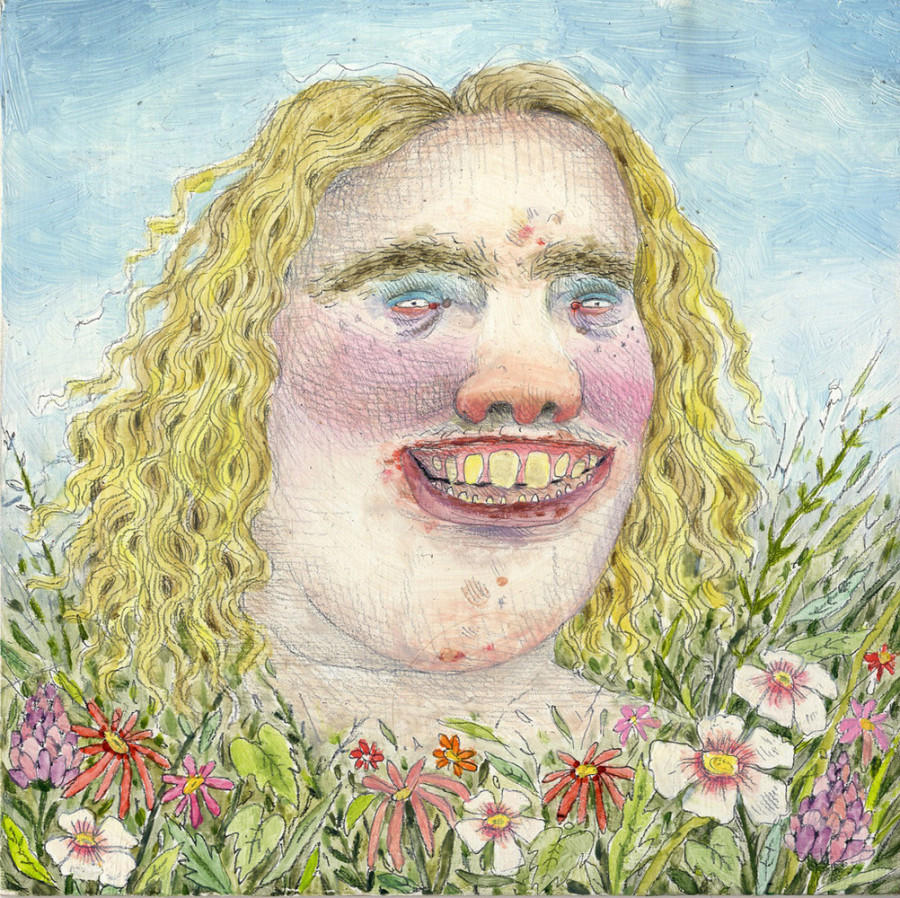 What, aesthetically speaking, stuck out most from growing up in rural Pennsylvania? In other words, what did you find most beautiful (or most beautifully ugly) as a budding human?

I remember being very in tune visually all my life -- sponging and contextualizing everything, paying attention to how things looked or moved and being inspired by images for as long as I am able to think back. So in a lot of ways, Pennsylvania has been the foundation of my aesthetic from day one. I always liked the pride of being a “country girl” and admired small town fun, traditions and slowness. A lot of the images I make include props from my upbringing, Pennsylvania Dutch Hex signs, hunting camps, blue ribbons from the fair, hunting dogs, the deep woods, the downed dead buck -- the list of archetypes goes on. Aesthetically, for me, there wasn’t much not to love.

However, Central Pennsylvania is very conservative and overall, it was pretty isolating to come across new things or pursue interests. I wasn’t exposed to art except what I occasionally saw in magazines and television, so in retrospect, that is the saddest part about growing up so rural. I always hoped I would get to live in New York and when I finally did, the romanticism of both the urban and the rural situated me liminally in-between: the work that I make comes out of this discomfort as I try to navigate wanting both. I have great pride and reverence for the country that inspires me, but in a lot of ways, is constricting. I want to reflect both a constant critique and a defense of rural living. 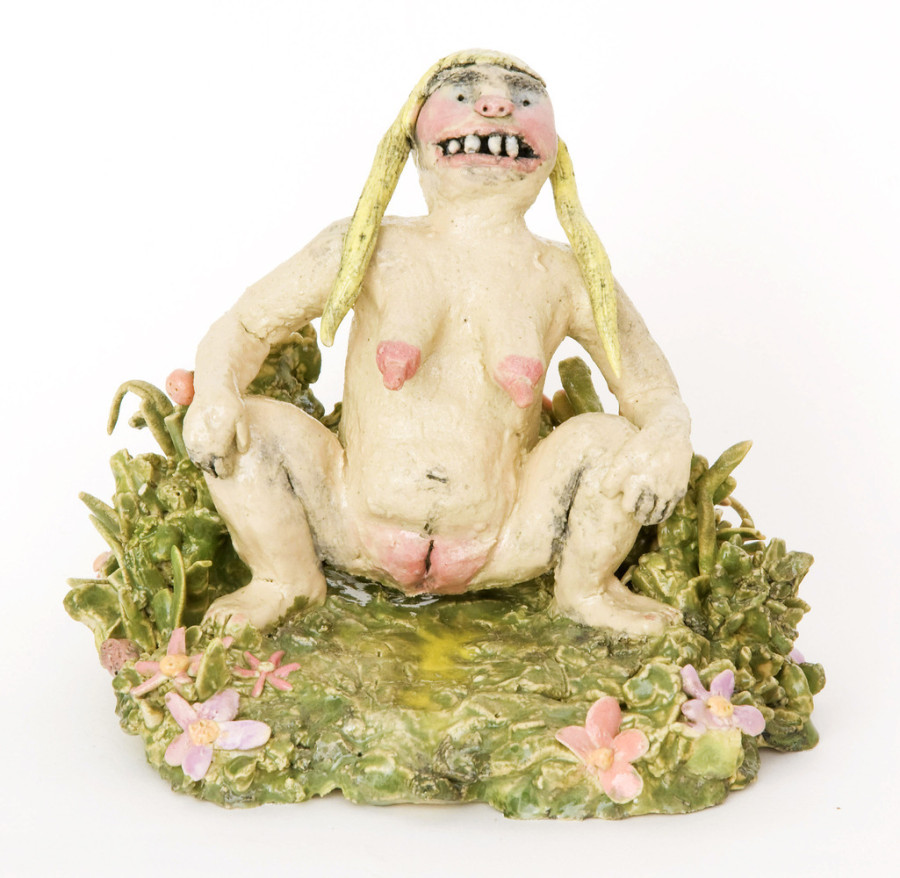 What were some of your earlier experiences with art?

My grandfather was self-taught and made really weird folk art drawings and cartoons. We would draw the same subject or a still life together. I was very young. In about 3rd grade I started taking private art lessons from a local artist, but I never really understood that I could be doing art in some way as a profession, like Al Jaffee or Harvey Kurtzman, who I was obsessed with from my Dad’s old MAD Magazines.

I went to undergraduate to become a high school English teacher, taking art classes as I went and getting deeper and more serious about art making. I was introduced to John Currin and Lisa Yuskavage and they changed my life. Yuskavage was making paintings of bodacious, languid sex kittens that were strange and luscious and everything I ever wanted to make. I liked that Yuskavage and Currin were a little bad behavior, titillating and unlike anything I had ever seen before. I felt like I shared their sensibility; they bounce back and forth between cruel and tender. I had very little concept that contemporary art (and especially painting) could look like that or could be that. I never even knew anybody that was an artist. I was so inspired and voraciously devoured anything I could read and became totally immersed in fine art. I switched majors and went to graduate school and never looked back. 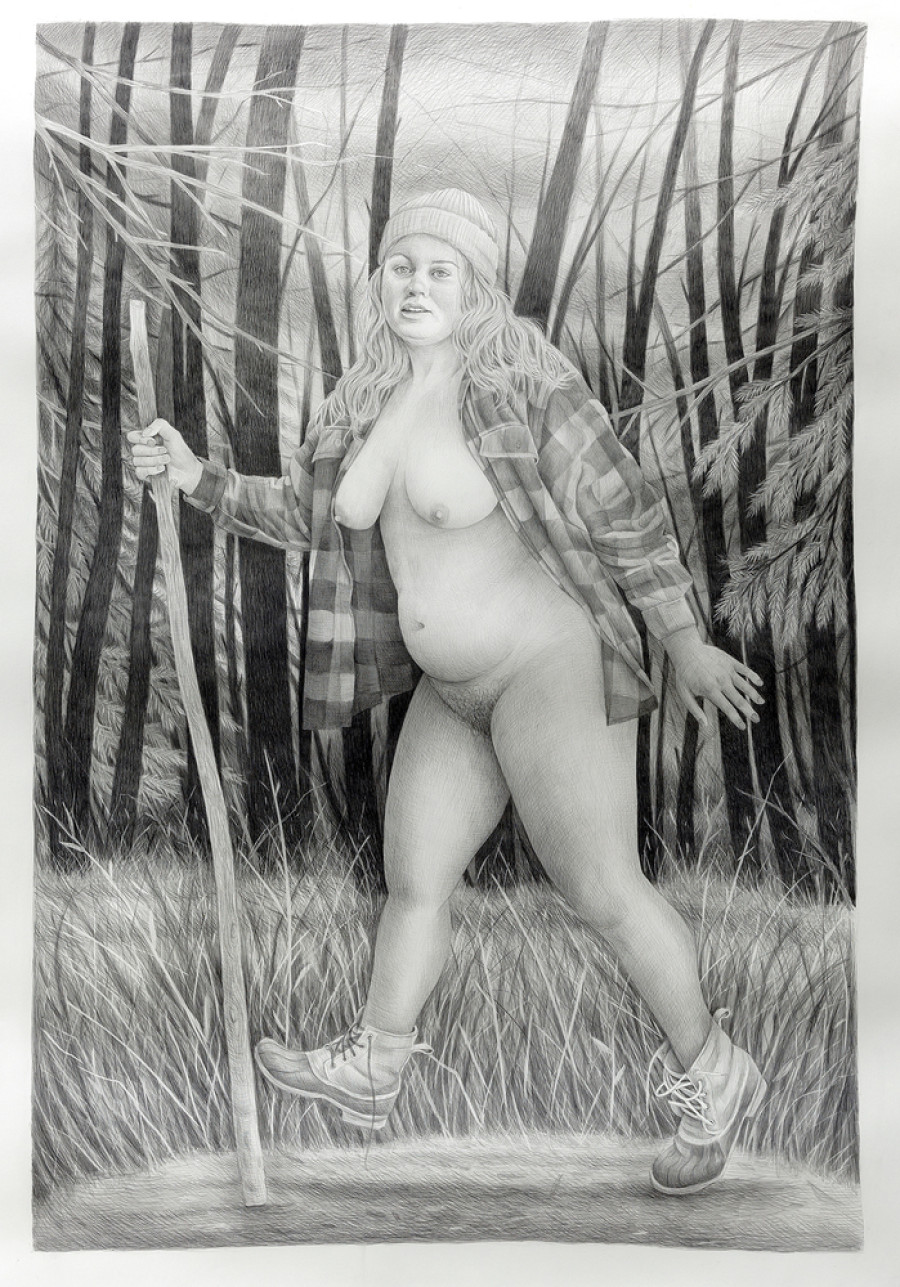 How does the art scene differ in Pennsylvania from New York?

As far as an art scene, [in Pennsylvania] it is non-existent. There are hobby painters and craftsmen, but it is a very conservative scene; showing a nude painting in public would really cause a stir. The most public showing of art in our town is the County Fair (which is not without its treasures, for sure!). The closest metro is Pittsburgh, about two and a half hours away. Philadelphia and New York are four hours away.

But inspiration and “art” is all in what you make of it, as I find it in local objects and ephemera, stories and weird backwoods inhabitants and scenes are just as valuable. I go to New York one or two times a month and in a lot of ways, the Internet and Instagram have become invaluable in terms of being present and intimately aware of other artists and shows. It is inspiring to me that anyone, even in remote places, can navigate and be finely tuned in to the contemporary art scene through social media. 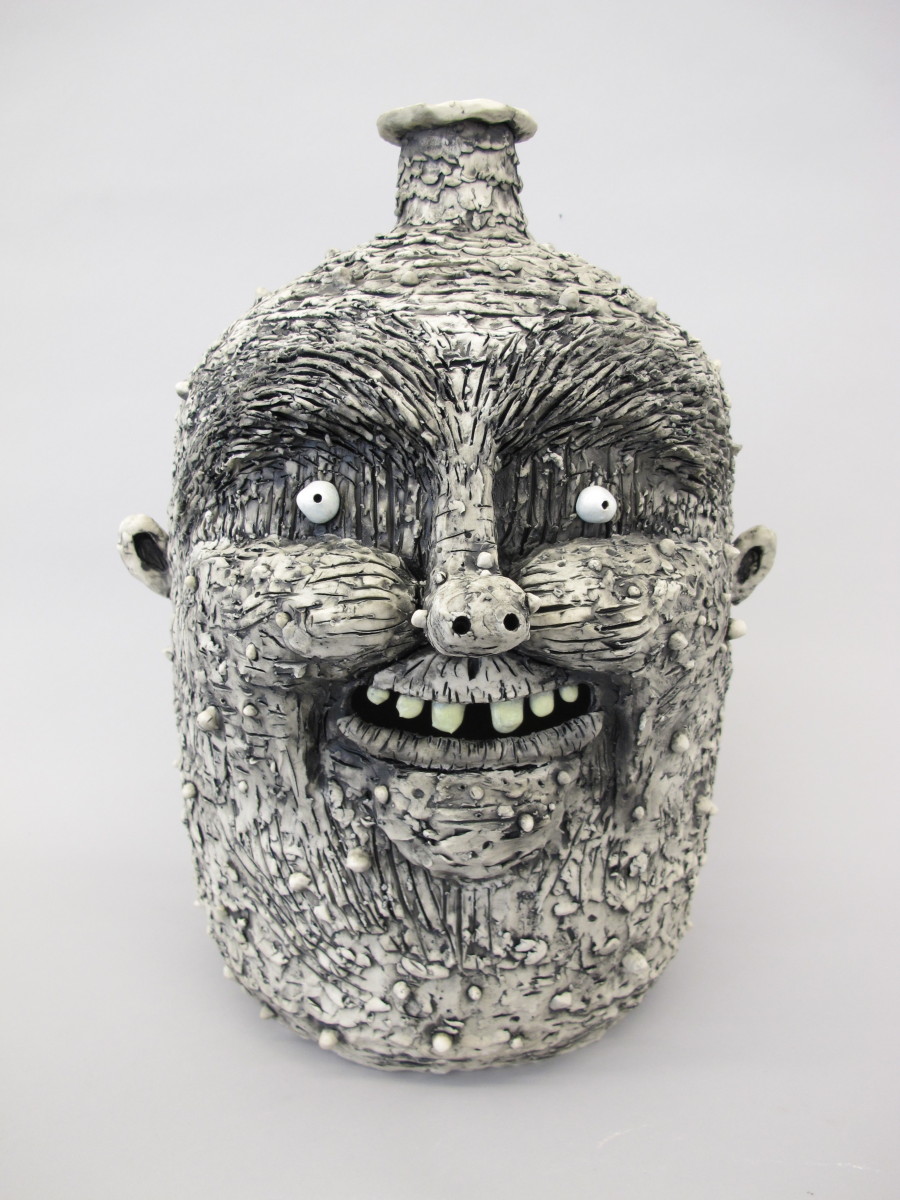 What inspired your ceramic jugs series? Is each face a particular character or person?

Growing up, face jugs were a common image and presence in museums, homes or antique stores, especially; as well as the South, which I have spent some time. Face jugs are one of the traditions that are an amalgam of many cultural influences. In the South, slaves used face jugs as grave markers designed to scare and keep the devil away. I always knew them as a personally crafted jug used to store liquor; features would scare children so they would not to try the contents. For me, the jugs are an extension of the face jug tradition, using a familiar “art” object from the country and expounding on it as an homage in my own vocabulary.

I think the jugs are very powerful in personification. I never have thought of my art as characters, so much as I have with these sculptures; perhaps it is their physicality. I wanted to convey a creature-y sense of other worldliness and wildness. When I was making the jugs, I thought a lot about their character and personality -- Is this jug happy today? (Am I happy today?) Is this jug neutral in their expression? (Am I blah today?) In some aspects it is self-portraiture, for sure! Often I would set out to make a jug angry and furrowed and it would just not work -- formally, it was not happening, and when I made a different expression of pleasure or happiness (or vice versa), it was instantly clear, that's what it needed to be. Maybe it is a little “hippy dippy”, but I spent a lot of time holding their faces in my hands and thinking about them as personified objects, or even what color glaze they were destined to be. I felt very close to them.

I really view these as treasured objects; magical, highly revered objects. I absolutely created them with the idea that they personified mysticism, and personified an intangible reverence for the pastoral, country ephemera, secrets, history and traditional story telling. When I think of them animated, they are right at home in Early American/Catskills tales and Appalachian mysticism with an ambiguous narrative behind them. I think they are utilitarian objects for people, and yet they are creatures that are autonomous as well, as if they've always just been sitting in the woods existing on their own. In a lot of ways, I feel like they don't belong to anybody, the way you would keep an endangered or fictional animal to yourself. Maybe in their lifetimes they've crossed into the human cohabitation and they silently sit but are filled with all of their mystical backwoods tradition forever. That is putting a lot of narrative on them, but I view them as having some sort of story, and coming from some kind of weird place full of intensity. 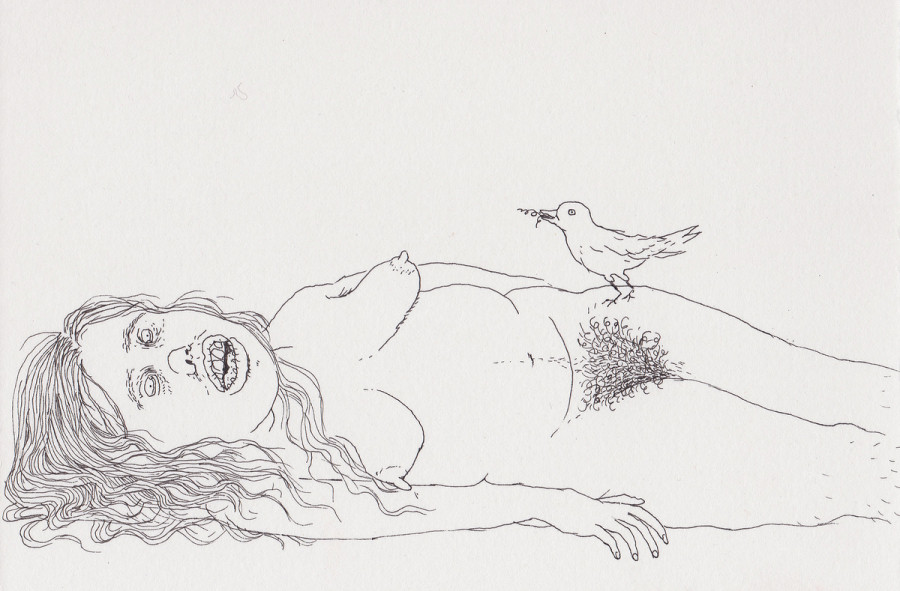 You have a remarkable ability to convey humor simply through the lines of a face. How do you go about making an image funny?

Comedy is very important to me. I’m obsessed with it in almost all incantations. I don’t have an agenda or have a formal formula for making something funny, but I mostly make the characters funny for my own relief. Real life is messy and abject. Not often is it slick, easy or aesthetically beautiful, and comedy softens the blow. There is so much horrific shit in the world and I’m usually so deep in my own personal cerebral froth, sometimes the only way I can cope is to make a funny cartoon.

The face jugs, cartoons and paintings represent a kind of blissful ignorance. They're totally fine with looking so hideous and awful, it’s of no consequence to them. In my mind, that gives them power -- to be so confident and content, although covered in acne, wrinkles, and blemishes, is the ultimate love of one’s self and self-acceptance. These characters are blissfully unaware, unruly, wild and untamed. They are off the grid and free, not affected by anyone or anything’s influence and I’m very attracted to that concept.

All of the cartoons, even when they're not directly me are still me. I had huge bushy eyebrows when I was a tween and a faint mustache. It’s like a little homage to what made me me, and the awkward shit that ultimately made me stronger. I think comedy works in that way too. To make fun of yourself and your own shortcomings and tell the world, before anyone else can get to you first. The more you embrace your own shortcomings, the less ammunition others have to influence you. To make others feel light and good is one of the greatest responses I could elicit from an audience, as to give repose from all the nuttiness out there.

The art world can be a very serious place and sometimes it simply feels good to make a cartoon Mountain Man vomiting in the context of it all. 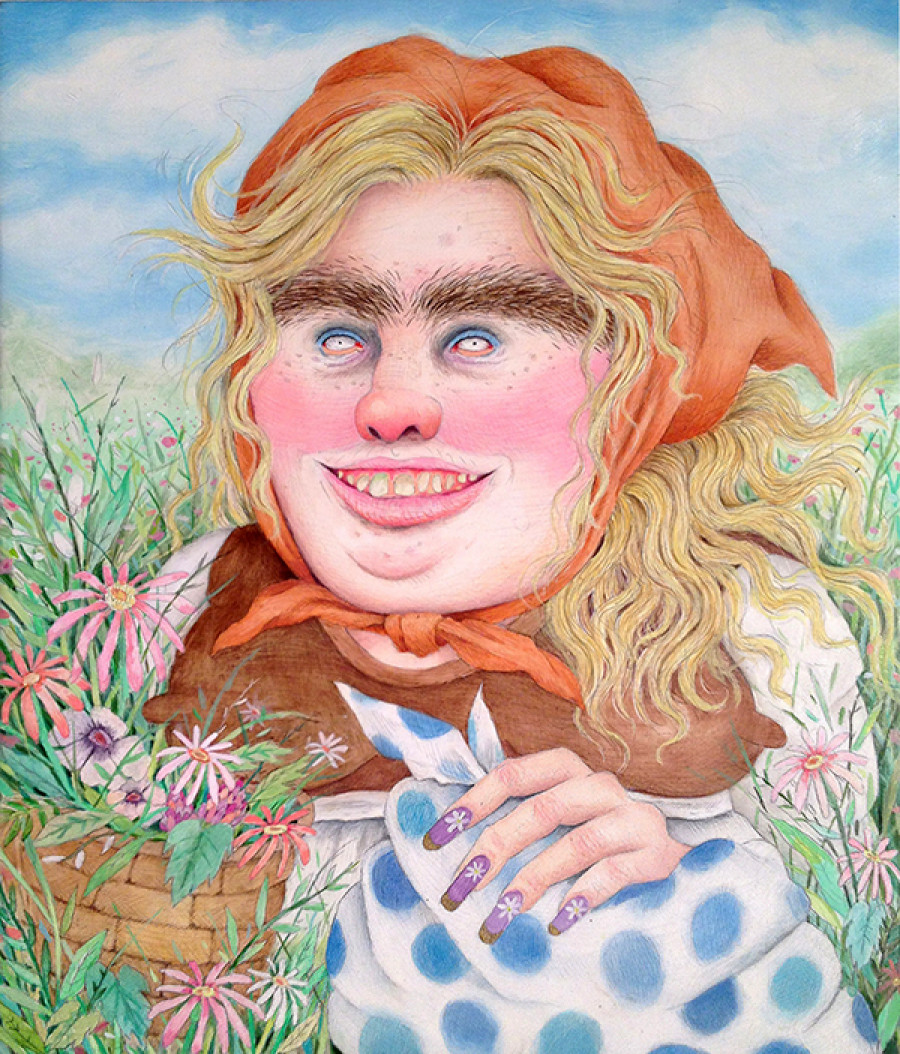 I am currently in a group exhibition, “Fetching Blemish,” at Invisible-Exports with some of my all time art heroes: Wolfgang Black, Celeste Dupuy-Spencer, Nicole Eisenman, Genieve Figgis, Dan McCarthy, Aurie Ramirez, Amy Sedaris and Cindy Sherman. I am coming off of a show in 2014 at Asya Geisberg Gallery where I’m represented, so I’m building a new body of work. I am very excited about some of the images and ideas. I am trying to take more risks outside of my comfort zone, which is very difficult for me, as my hand naturally wants to tighten things up and make things very specific. I am working on new ceramics -- twists on some face jugs and sculptures of some of the elements I make in my two-dimensional work.