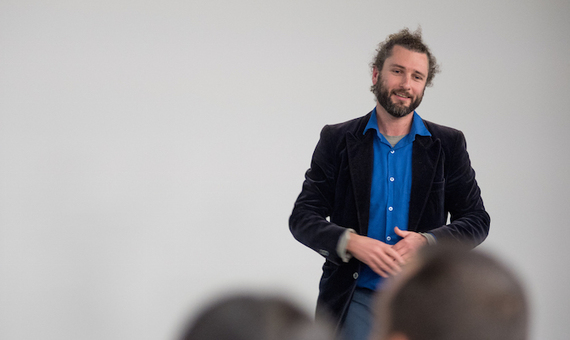 The 6.3 magnitude earthquake that hit Christchurch, New Zealand on February 22, 2011 left the city wrecked and its residents emotionally fraught. Having just started a PhD in temporary architecture and participatory urbanism, Barnaby Bennett relocated to Christchurch from his then-home in Melbourne, Australia. He soon became a key figure in the local community's engagement with the rebuild process - which many have criticised as poorly executed at both the city and national government level. Barnaby is also one of the founders of Freerange Press, a publishing collective that is currently putting the final touches on a book titled Don't dream it's over: Reimagining journalism in Aotearoa New Zealand. I'm another of the editors on the book, and put a few questions to Barnaby about where things are at with the rebuild five years on for Impolitikal.

How did Freerange Press come about? What drives the collective, and how does it operate?
Freerange Press originally emerged in 2006/7 out of a series of conversations between friends in Wellington. Partly out of a desire to maintain and develop a network of relationships with great people around the world, and partly to attempt to raise the level of conversation around urbanism, cities, design, architecture and politics. The name was 'borrowed' from a studio space that a number of us worked out of on Tasman Street. Since 2007 it has gone through a few changes. Originally it was largely led by myself with a huge amount of support from others, but since 2012, when it became a legal cooperative, a board of directors has shared leadership roles, and with Emma Johnson stepping in to do a huge amount of the work. We've also recently, finally, opened up Freerange to membership. So we are in the process of becoming a membership-run organisation that will function as a cooperative publishing company.

I think different people are interested in Freerange for different reasons, but largely it's the desire to be part of, and see, great books being published about topics that we are really interested in and want to bring into the world. In many ways we are quite conventional; it's run as a company, we pay tax, we get books printed and sell them in shops and online. In others we are bit more weird. We have no scaling up or growth strategy. We are happy to stop publishing if it's no longer what the people involved want to do. One of our basic rules is to be editorially radical and financially conservative. That way we are never bound into making decisions because of previous financial commitments. It's an open-ended approach to running a business, I'm interested to see where we end up.

Were you in Christchurch when the major earthquake occurred in 2011? How has it shaped your path since?
On the day of the big quake I was in Sydney, but was living in Melbourne. It was obviously shocking to see the damage, and a group of us with connections in Christchurch gathered soon after and speculated about what we could do from so far away. Our first Christchurch publication was born of this, Chur Chur: Stories from the Christchurch earthquake edited by Gina Moss and designed by Shakey Mo. The goal of the publication was to do the simple act of listening to people's stories, with a second goal of selling the book to people outside of Christchurch to raise some funds.

But the first goal was really the most important - from afar we thought the best thing we could do is to make people feel like we were listening and interested and willing to help. Personally, I've been interested in participatory urbanism, and post-disaster situations for long before the quakes. So for me to have just started a PhD and have this happen in my own country was a kind of tragic opportunity I couldn't avoid getting involved with. Of course it all became very real and unacademic once I moved there and became entangled in the excitements and frustrations of the place.

What are some of your biggest frustrations with how the rebuild has been handled?
This is a big list! I'd say buy Once in a Lifetime [another Freerange title focussing on Christchurch post-earthquake] and read it! For me the three big failures of the rebuild have been:

1. The failure of the [NZ] government to show any kind of understanding of the power and importance of participatory engagement for the rebuild. I don't mean this as some 'nice', airy fairy idea. A plan that doesn't have community buy-in was always going to be much harder to convince people about, and they never seemed to realise that. Further, the Prime Minister's own Science Advisor Peter Gluckman warned soon after the quakes that one of the big dangers for the mental health of the community was to reinforce the sense of disempowerment created by the quake experiences by not engaging the population in the recovery - and yet this is exactly what [MP Gerry] Brownlee and co did with their approach to the rebuild. I don't think it was malicious, but it did so much damage to both the vision of the city and the sense of promise and hope that the population might have had from being involved. They were warned at the time, on a number of occasions by different groups that they were taking the wrong approach, so I don't have much forgiveness.

2. The way that heritage was treated. Not just individual buildings, but the idea that particular places and streetscapes in the city held importance and value to the people of Christchurch. This never seemed to enter the minds of the decisionmakers, and is really an extension of the first problem. It's obvious that old buildings had killed people and held some sense of danger for some time after the quakes. But so had new buildings, and if you look at the city now, the old ones that have survived are so valued and loved. And frankly, despite all our modern wealth and technology, few of the new buildings are anywhere near as urban or sensitively scaled as the city that has been lost was.

3. The last is the complete screw-up over housing. Partly in terms of their approach to 'let the market sort itself out', a move that led to huge amounts of stress and financial burden for people. Too many landlords, with support of property agencies, put up their rent massively because there was a disaster-induced housing shortage. This enabled a classic case of money following the wealthy, and for no other reason than they happened to own it before the quakes. Secondly, EQC (the state-owned insurance agency that covers the first $100,000 of each claim) was screwed by a few early court decisions and never recovered and became a horrible organisation for its customers by most accounts. Sadly we are coming up to six years since the first quake and thousands of people still haven't had their houses fixed. It's a shambles.

A bonus fourth issue is the various agencies not taking advantage of the opportunity to remake Christchurch as an ecological or sustainable city. I've spent quite a lot of time reading through the summary of the comments from the large Council-run engagement process that was run in 2011, and a green, sustainable and ecological city was largely what people wanted. It would have futureproofed the city in terms of resilience and energy, and importantly it would have given the branding of the city and its ability to attract capital something exciting to hook onto. So again, a kind of fear and narrowmindedness led to a huge lost opportunity, but hopefully not permanently lost as some good things are slowly starting to happen now that the citizenry is reasserting its role.

Why do you think it's important to involve publics in the conversation, and decisionmaking as to how Christchurch is rebuilt?
I think one way or another publics are always involved in the making of cities. It can be via blunt processes at the ballot box or more nuanced and created versions in which citizens are more actively engaged. That latter is not easy and creates its own risks. The public has an amazing capacity for evolving new ways to challenge and thwart the best intentions of the processes. But if it works the outcomes can be extraordinary. Making cities is like a giant, slow, improvised dance, and it takes enormous practice from everyone's parts to get good at it. I think Christchurch has had some great training in the past five years and needs to just keep going and keep talking and supporting new initiatives.

I was involved with FESTA, the world's only Festival of Transitional Architecture, and that remains the peak event for engaging 'the public' with a big weekend of interactive experience-based ways of testing and experimenting with new ideas. Jessica Halliday and Anne Cunningham run Te Pūtahi: Christchurch centre for architecture and city-making, which is sustaining many important urban conversations. Gap Filler goes from strength to strength. Various geographical communities out east are strong and thriving. I was involved with a campaign called Option 3 + that lobbied successfully for a locally-led recovery, and many of the people who were involved with that meet regularly and continue to lobby, agitate and build relationships. Also, the local council is slowly developing new and better forms of engaged democracy, so hopefully they flourish and grow.

All these things, and many more, are critical because ultimately it is the public that acts as the counterbalance for political structures. It is only publics that can gather when they fail or can't handle an issue. This is an idea developed by Walter Lippmann and John Dewey in the 1920s in America. Christchurch has exemplified this to me. When the authorities have been overwhelmed - and it's happened frequently post-quake - it's always groups of people that gather together to point the way. Sometimes it's a struggle, and it doesn't always work, and it's always messy. But it has to be messy because it's created by the failure of the tidy processes. But it's also the only way that cities develop and grow at the pace and speed they need to and that they respond to the enormously complex issues around cities, which are only going to get worse with climate change, energy shifts, technological impacts, housing issues and many more problems of our time. I think the public can be seen as a kind of Geiger counter for the presence of issues in a city, and the managing authorities that run cities should be smart enough to register these concerns and publics when they emerge.

The real point here is there is no optimum way of doing this. There's never going to be a new interface, or app, or participatory programme that solves the problem of cities. Cities exist as amazing, complex, entangled overflows of problems and issues from different competing groups - that's what makes them rich and stimulating. If we ever solve any part of them it just means that something is being suppressed. So, like a garden we need to live with the messiness; develop sensitivity, engage with forces we can't understand, and by working out the deeper flows and movements of materials and energy we can then hopefully watch it flourish - at least until the next winter.

Read in full at Impolitikal.com.