"I didn't fall back in love with God until my brother's death, when I first cried on my yoga mat. There was a shift in my yoga practice and I could finally feel life again." Faith Hunter, who has faced her own life's trauma, is a living example of how yoga heals from within and how it allows you to see yourself and the world around you with renewed clarity and appreciation. Faith is also a social advocate, writer, yoga instructor, founder of Embrace yoga studio in Washington, D.C., and along with Lizandra Vidal, co-founder of Spiritually Fly Changemakers, a campaign for women's empowerment through yoga in Haiti.

When my friend, an avid yogi, mentioned the idea of using yoga in Haiti to empower women, my initial feeling was skepticism. I was suddenly distracted by a pretentious image that can be yoga culture: women walking around in their Lululemon outfits holding $5 bottled water, and ssh-ing folks talking too loudly before class even starts.

Yoga in Haiti? Wait. What?

Even as an on-again, off-again yogi I was not quite convinced that yoga was, in fact, what these women in Haiti needed. I mean, we're talking about a country that, before a devastating earthquake in 2010, which claimed over 200,000 lives, was already tirelessly referred to as "the poorest country in the Western Hemisphere." An earthquake that left a city in ruins and forced over 600,000 people to shift their already indigent living standards into tents. Which then led to difficulty in protecting those living in such fragile structures, placing the safety of women in particular, at risk of rape. Not to mention the cholera outbreak and Hurricane Sandy in 2012 that swept through only to claim more lives. It seemed a domino effect of misfortune was occurring, and many would argue still persists today.

When I hung up the phone, I took a second to think past the physical practice of yoga or Asana, that many of us often times solely associate with yoga. I considered the conscious breathing and meditative nature which is really the driving force behind the spiritual awakening and mental well-being that manifest through the consistent practice of yoga. The movements are but a sliver of yoga: the mental and spiritual healing is really what distinguishes it from any pill a doctor can prescribe. The word "yoga" comes from the Sanskrit root "yuj" meaning union or to join. The women in Haiti have and continue to face subjugation, in a society that overwhelmingly favors men. As a result, the women in Haiti have come together in multiple ways, to overcome this adversity. The degradation of women in Haiti has done more than create a society rooted in gender roles, it has been the catalyst behind what has caused rape and other demeaning acts towards women to become socially accepted. We have seen this happen across the globe, when there is poverty and political unrest, women become targets of violence.

"Women are the pillars of society," said Haitian-American author Edwidge Danticat about the strength and importance of women in Haitian society. It is no doubt the women in Haiti play a vital role in the economy whether Haitian men wish to acknowledge it or not. Despite the anonymous images of Haitian women we see in the media, they do possess contributing roles in society, goals of their own and dignity. In spite of, the hardships women in Haiti have gone through for generations, their strength and resilience has not wavered nor has the dream of enhancing their quality of life.

Although psychosocial support groups have been effective in supporting mental health of rape victims in Haiti, they are typically through NGO's working short term. Investment in community organized models to promote long term sustainability is critical to affect meaningful change in Haiti. The campaign put on by Spiritually Fly Changemakers will do more than empower women in Haiti, it will enable them to practice yoga and reap the therapeutic benefits long after the campaign is over. Haitian women have endured so much for so long. The alternative healing practices of yoga are long overdue for these women who have been dealing with the stress that comes with abject poverty and misogyny. Yoga for Haitian women may prove to be the personification of much needed liberty, amidst an environment that relentlessly chips away at the pillars from which it was built.

To learn more about the campaign for women's empowerment through yoga in Haiti and how you can get involved visit the website. 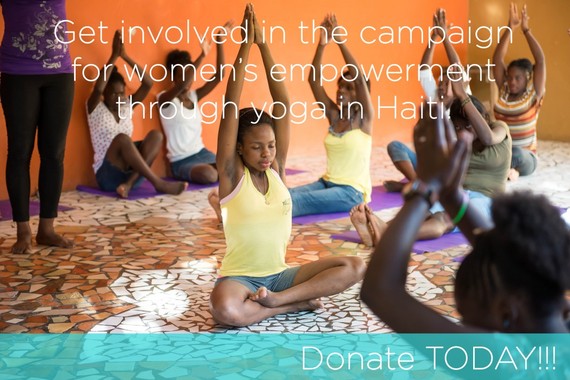 Don.t Throw Away the Crust