For the last ten or 15 years, I have engaged in a concerted, and largely successful, campaign to pretend I wasn't getting older.

This was juvenile, I admit -- but that was the point, to be juvenile. I played football with young guys. I climbed mountains (or a mountain). I dated a lot, making some odd psychic connection between that and being young. Never quite connected those dots.

A few weeks ago, I was sitting in the barber's chair and asked, as I always do, to see the back of my head when the haircut was over. I have noticed the bald spot for several years. That was no surprise.

But I also noticed for the first time that the hair on the top of my head was thinning to a frightening degree. It wasn't Homer Simpson territory yet, but it was scary.

I know -- how could I NOT have noticed this during the years the crop was diminishing? A fair question for which the only answer is: We have an astonishing ability to ignore that which we don't want to see even when it is directly in front of, or on top of, our heads.

Our ability to self-deceive it unlimited. I would walk down the street and think, I'm that same guy I was on a college campus 40 years ago. I'm the hot shit with the fresh Yale MBA who one of my professors believed would set the world afire (in a good way. Wow, was she off base.) I could work out at the gym and think, yeah, sure, my biceps look like that guy's, those women think I'm hot.

(This was all within my head. I never said this stuff out loud. If anything, my outward persona was of a guy burdened by doubt.)

But seeing the landing strip where lots of hair used to be was a screaming wake up call.

I took a selfie of the top of my head. I looked at photos from five, ten years ago to assess the damage. I thought about guys my age I knew and compared my head to theirs. 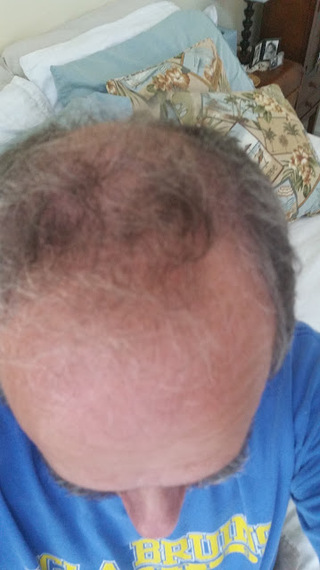 It was all bad. But this stopped me in my tracks. THIS, of all things, meant the battle against aging was lost. I flew the white, hairless flag.

Literally for the first time in my life, I saw myself getting older. Or simply just old. Two artificial hips, a handful of pills every morning, being called "Sir" by people in their 50s, none of it had the impact this did.

Now, my thoughts ran in the other direction. Instead of thinking how I had kept age at bay, I wondered, okay, how long will that small amount of hair on top last? Instead of thinking women at the gym thought I was hot, I was convinced that all they saw was a balding old man with puny biceps, before realizing, they aren't thinking about me at all.

Just another old guy coming to grips with years of self-delusion. Nothing glorious or pretty about it.

I was on out in LA recently, a place I lived for ten years, and walked on the UCLA campus. It was that very campus where, 30 years ago, I stopped a young coed to ask directions and she called me "sir." During my California years, I played touch football as much as possible, and except for being caught up short by that coed, rarely thought about getting older.

Then, I had two young children, and what others assured me was a bright future of decades of triumphs. And of course, lots of hair. 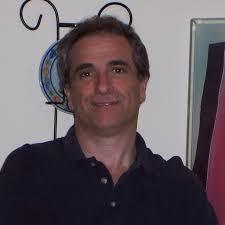 Now, I have two young grandchildren, a multi-layered (aka, not-gone-as-expected) past, a future measured in years (hopefully), and doctors visits. And not much hair.

Don't know if I will ultimately accept this development gracefully. Probably not. And the smart money is that in a couple of months, I'll be back pretending to be young again, certainly back on the football field, trying to be cool with the grandkids, all that stuff I did when the guy in the mirror seemed to look like the kid on campus.

I always liked the poem The Love Song of J Alfred Prufrock, especially these lines, which I sort of understood.

"Shall I part my hair behind? Do I dare to eat a peach?
I shall wear white flannel trousers, and walk upon the beach.
I have heard the mermaids singing, each to each.
I do not think that they will sing to me."

Now I think I do understand. But maybe that's just old age talking.