The recession is hurting U.S. cities at "radically varying levels," which will lead to an uneven economic recovery, according to a new study by the Brookings Institution.

"This is not one national recession. It's felt barely at all in some parts of the country, and it's felt deeply and significantly in others," said the Brookings Institution's Alan Berube, co-author of the report, in an interview with the Huffington Post. "For the next several months we'll have to pay attention to several places that look like they're not poised to recover anytime soon."

San Antonio, Tex. came out on top, and Detroit, Mich., with its 14 percent unemployment rate, is in last place. The Brookings Institution's "MetroMonitor" site provides a list of city profiles and six interactive maps. The data will be updated quarterly.

The report finds two distinct Manufacturing Belts (Berube said Brookings went with "Manufacturing Belt" instead of "Rust Belt" because, "We have friends there who have been trying to shed the rust image for some time"). One belt spans Midwestern metro areas decimated by the auto industry and the other is in the Northeast, where manufacturing in aerospace and plastics hasn't seen such a decline. And there are two "Sun Belts": a bad one in housing-wrecked areas around Florida and Arizona, and a better belt stretching across states like New Mexico, Texas, Oklahoma, Arkansas, and Louisiana, where there have been modest home price increases.

Berube said the federal government should pay attention to the uneven effects of the recession in its efforts to revive the national economy.

"The point of the stimulus package was, 'Let's address an aggregate gap in demand and spend a certain amount of money in a certain amount of time.' It was not all that tailored for the specific problems that individual metro areas faced," Berube said. "We want to keep Washington's eye on the ball. It's been an uneven downturn it's going to be an uneven recovery as well."

The U.S. Conference of Mayors complained this week that urban areas haven't been given a large enough share of stimulus funds.

Here's the list of the twenty strongest and weakest metropolitan areas: 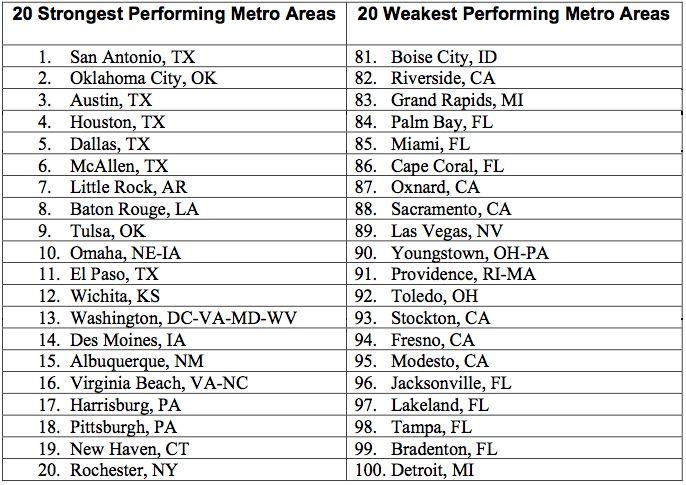