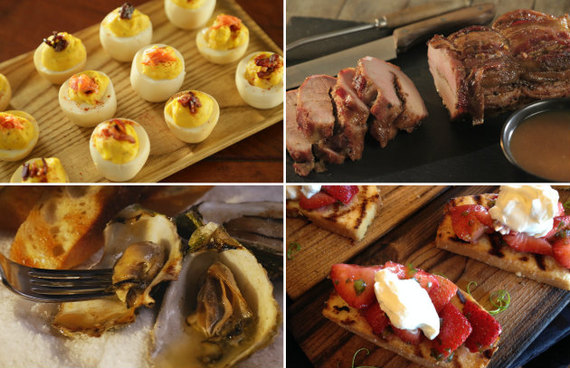 I've been on book tour since early May. It's been exhausting, but exhilarating. Atlanta. Austin. Boston. Denver. New York. Miami. Phoenix. Philadelphia. Portland. Salt Lake City. And so on. My first thought most mornings is, "Where am I?"

But on the morning of July 4, I know exactly where I'll be -- in my own bed. Because Independence Day is a command performance in the Raichlen family. (Seriously, no excuses.) Every year, we host a barbecue at our Martha's Vineyard home, then ferry from Chappaquiddick to Edgartown for a late afternoon parade on Main Street -- the kind that makes your eyes tear up and your heart pound with patriotism -- followed by fireworks over the harbor after sunset. If it sounds idyllic, it is.

Here's the menu I envision.

Chappaquiddick Smoked Oysters: Shell middens on Martha's Vineyard and Chappaquiddick evidence the appetite ancient island dwellers had for oysters. And no wonder: oysters from nearby Katama Bay are plump, briny, and sweet, needing nothing more than a kiss of wood smoke to bring out the best in them. Buy whatever oyster species is local or freshest. (Hopefully, you've made friends with your fishmonger.)

Smoked Deviled Eggs: Long an American picnic staple, deviled eggs are even better when the eggs (already hard-cooked) are peeled and briefly smoked before halving. Fifteen to 20 minutes of hot-smoking or 1 hour of cold-smoking is usually enough to impart flavor; longer, and the whites tend to get rubbery. Alternatively, you can arrange the peeled eggs--halved, this time--in a ceramic baking dish. Cover the dish with plastic wrap, leaving one small corner open. Insert the tube from a handheld smoking device. Light the smoker according to the manufacturer's directions, then add smoke to the baking dish. Remove the hose and seal the plastic wrap. Let the eggs steep in the smoke for 4 minutes. Repeat if desired. Continue with the recipe as usual.

Bourbon and Brown Sugar Smoked Pork Loin with Nashville Sweet Barbecue Sauce: Flavor is added at every opportunity: the loin is butterflied, and the inside seasoned with a homemade rub, mustard, brown sugar, and bourbon. More rub goes on the outside, then several strips of bacon are tied around the roast with butcher's string. (You could also do a bacon weave if you're feeling ambitious.) The package is then indirect grilled with hickory smoke until the meat is tender and the bacon's golden-brown. A bourbon and brown sugar glaze, applied toward the end of cooking, ups the food porn factor.