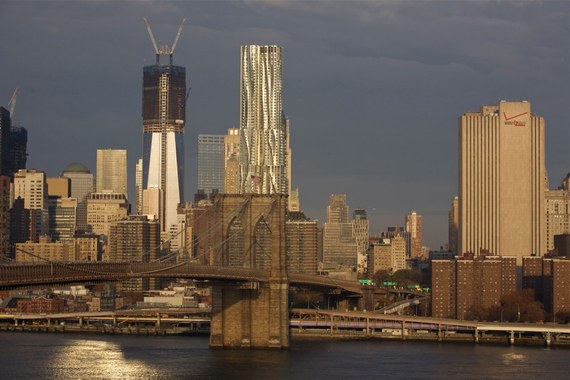 Part of a series: God in Other Places

The in-your-face suffering constantly bombarding us as we travel the city is a gift. It's impossible to walk down the street and not really notice the teenage addict nodding off on the cardboard, the pregnant woman hoisting the huge wooden tag sale sign over her head or the old man with the bad leg carefully hobbling down subway station stairs.

It's also a gift to be given daily opportunities both to be able to help and to turn people down. Suspend disbelief. Consider every person we refuse -- a woman begging bus fare, a deaf man who shoves a card in your left hand or the monk who shoves prayer beads in your right, a teacher. Residual emotions that linger after each encounter may eventually inspire compassion -- that ramped up empathy/visceral impulse to help. Others may reap benefits of that compassion. We may, for example, turn down a gutter punk on 57th in the morning, then buy a bottled water for another on Jane Street that night.

Witnessing others suffering is also a gift because it deepens our personal sensibilities. In New York, we glimpse cultural, spiritual, economic realities different than our own. Visiting them, affects us. In that way, we may regard ourselves as being part of an improvisational play, revealing itself block by block.

The last scene I was in really altered my perspective.

The pushcart vendor and the homeless man

I stood in front of the pushcart where a man nearing heat exhaustion was frying me lamb and rice. His face was in obvious distress. Sweat pored off his golden brown skin.

"You must be hot," I said idiotically.

The man's eyes watered. He regarded me cautiously, as if considering whether talking to a customer might stave off his nausea.

"In here," he said, indicating the windowless cart. "The temperature is 25 degrees hotter. Easy. If it is 90 degrees in there, it is 115 degrees in here."

It was well over 90 degrees outside.

The pushcart man continued to fry my meat. He used his spatula to deftly scrape lamb strips into the box.

The man stared at me, almost gratefully, noticing me for the first time.

"That'sit. If you haven't done it, you can't understand," he said. He had a slight Pakistani accent. His words were nearly slurred. It hurt him to have to form them.

I don't each much meat. My food budget was low that day, and I had rationed it until dinner. Lamb over rice was cheap and filling, and street food reminded me of childhood. I thanked the man and carried my treasured purchase to Bryant Park.

I've always felt strange eating food outside in places where hungry people also hang out. There have been days in my own life where I went without food, and know how painful it can be to watch.

I sat at the most inconspicuous table I could find, in front of a miniature golf course where a family was teeing off. I opened my box, and made a half-hearted bargain with myself that I might only eat half, and share the rest with someone else. Still, once I started chowing, I couldn't stop. I devoured my bargain with a forkful of lettuce. I took a breath, then a sip of water, and looked up.

Sure enough, a homeless man sitting a few tables down was watching me eat. I leaned back slightly and saw him: his hefty bags, his glassy eyes, the slight frown tugging his lips. As etiquette dictates, we both looked down after making eye contact.

I chewed the rest of my food miserably and stared into the remains of my dinner. I joked to myself that if I had been eating one of my more typical dishes -- falafel, kale salad -- the man wouldn't be interested. Sentiments of ignorant people blaming homeless people for being lazy, for lacking initiative, surfaced in me like an unwelcome ghost. I ate quickly, cursing myself, cursing the man.

That night, I didn't feel so good. I had walked nearly 70 hot blocks that and the meat soured in my stomach. I lay on my back on the couch, waiting. Unmoving, I thought about the push cart vendor, wondering if he made it off the street. I envisioned the homeless man, then. My own past experiences revisited me. I remembered, distinctly, the way steamy scent of paella, the smug faces of well-dressed people, their echoey conversation, agitated me as I passed a sidewalk café in San Francisco one night. I remembered being so lonely that sitting in my apartment listening to the rhythm of neighbors setting the table for dinner, tugged my heart strings. I remembered inhaling scents of spices and fruit in the Pike Place Market in Seattle, convincing myself the scent would full me up.

I felt gratitude, again, for those experiences of going without, how integral they are to my perspective now when considering small things I have. In that sense, the man was a messenger, putting me in touch with my old suffering self. Perhaps I needed to see her.

I recognized too that hunger may be a teacher for the homeless man too, that longing probably meant something different to him. I couldn't pretend to understand what road he was traveling.

I closed my eyes, making a vow to myself to rekindle my old simple habit of giving one small thing daily to someone in need whenever I walked in the city.

It didn't matter who moved me, or asked me, or why. The shift in consciousness was the important part.

I put my palm on my chest and thought how lucky I was to be in the city -- a place that provided the ramped up ability to experience this conundrum daily -- to be given the terrible beautiful gift of feeling both the impulse to help, and to turn people down.