One critic sardonically called the biannual architecture show now up in Venice "the biggest, most glamorous architecture show on earth." It's more often than not a lot of hoopla for navel-gazing architects. This year's show has captured the usual kind of criticism within architectural circles, torn between finding some things beautiful but then feeling the guilt for being ravished by the beauty. This year's curator, Japanese architect Kazuyo Sejima, authored the theme: "People Meet in Architecture." It was at least an attempt at heading beyond architecture for architects' sake; eyes were supposed to be not on architecture, but on its results.

It was a great year for Bahrain to show up, the first time it has exhibited in Venice, and the first time any Gulf country has shown in the architecture Biennale. The country won the coveted Golden Lion for its pavilion with a take that was more rhetorical, if not political, than other exhibitions. If any country has learned from the last several decades what architecture can do, Bahrain, as most other Gulf countries, could tell the story of how just a few decades of development can transform a country's shape and its people. 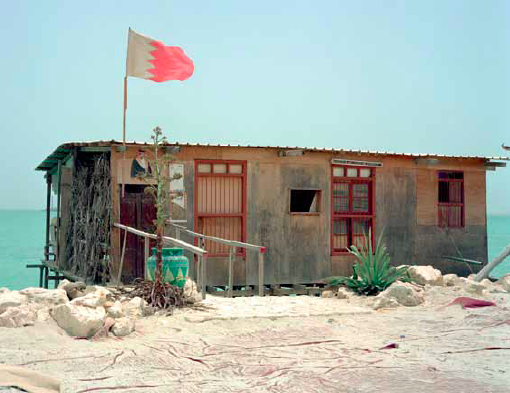 Image from the series 'A coastal promenade' by Camille Zakharia.

Perhaps more than other GCC countries, Bahrainis are concerned about their history. Nostalgia can be a chewy substance, but its absence can sometimes feel like a loud silence in the Gulf. Not so in Bahrain. In our preparations for Al Manakh 2, it was difficult to find any contributors in Bahrain who didn't want to talk about the present or future without a reference to the past. Consideration of the past, however, might have to do more with critical contemplation than with nostalgia.

Titled 'Reclaim Bahrain', the exhibition levels its critical eye at the consumption of Bahrain's coast. For a small island country, actually an archipelago, it seems ironic that the country should be worried about diminishing access to the coastline. But it is rightfully worried. You can visit Bahrain for days and never catch a glimpse of its waters. Bahrain is not alone in this matter. Cities all over the world have been trying to "reclaim" coastlines for the last couple decades.

Dr. Fuad Al Ansari, co-curator of Bahrain's entry with Noura Al-Sayeh , gave his reasons for his team's entry, "We wanted to come with a problem, not a solution. We wanted to share a problem with the rest of the world." He's right to share this problem, and hopes that Bahrain's presence this year "encourages other GCC countries to criticize themselves. You have to reflect back and think what you're doing." It's a lesson Bahrain can easily share.

This issue is addressed not by presenting bold proposals for coastal redevelopment - as might have been predicted - but through the reconstruction of humble timber huts that occupy this waterfront territory. The huts are built illegally, often on private or government-owned land, using found materials. To bring something informal and vernacular, not designed by an architect, to an architecture exhibition is a bold move, but it is a move that fits perfectly within Sejima's overall theme. The huts form a relaxed space in the context of a huge exhibition in which to sit, relax, drink tea, and cool off; 'people meet' in this architecture.

While these huts do reinforce curator Al Ansari's claim that Bahrain only came to Venice with a problem, there is also a solution presented: a master plan for the country by US architecture and planning mega-firm SOM. SOM's contribution to the catalogue describes a "Great Waterfront", one which Al Ansari praises for taking back the waterfront along the northern edge with parks, beach, promenades and marinas; like many successful waterfront developments before it.

But the huts remind one of a time when the waterfront didn't have to be "great." It just had to be; they represent a casual but essential relationship people once had with their water. What might be surprising is that it's not just wage earning fishermen that build these huts in Bahrain; it's professors and businessmen who refuse to accept public or private ownership of land and search for a vanishing experience once taken for granted. They represent a last spurt toward the water before the landscaping is laid out to define the relationship for them. Parks can be nice; and when a city can bring its citizens back to the water it shouldn't be dismissed. But this exhibition, revealing to us these frail but assertive gestures, fishermen's huts "caught in the awkwardness of the situation," demonstrates that parks can also cover up things lost.

'Reclaim Bahrain' is on as part of the Venice Architecture Biennale until the 21st of November 2010.

This piece builds upon research of Bahrain's 2030 masterplan in Al Manakh 2: Gulf Continued.