How is it that, 60 years after the Brown v. Board of Education decision that ended the legal basis for separate but equal schooling, some public schools in the United States have gleaming labs, libraries and laptops while others lack textbooks, toilet paper and teachers certified in their subjects? What will it take to provide all children the opportunity to have a great public education?

Much of the progress in desegregating schools has been reversed in recent decades. Modern-day segregation defies laws meant to end it, because it is based in socio-economic inequality that, more often than not, translates into racial inequality. The wealth gap between African-American and white households nearly tripled from 1984 to 2009. More than two-thirds of African-American and Latino students attend public schools where a majority of the students live in poverty. 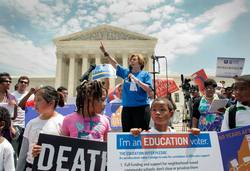 The dominant influences on education today have not helped -- the focus on "test-and-punish"; starving schools of resources, then labeling them "failing" so they can be turned over to private managers; and school closures and spending inequities that have destabilized neighborhoods and disproportionately harmed minority children.

Today, the fight to reclaim the promise of public education is being led by communities. A growing movement of parents; students; and business, civic and faith leaders and members -- along with educators and their unions -- is not simply calling out what's wrong, but bringing forth solutions that promote excellence and equity: early childhood education, wraparound services, high standards with real support, curbing standardized testing, and strengthening, not closing or privatizing, neighborhood schools.

AFT members, alongside our community partners, are engaged in "Mobilization May" events throughout the month, promoting real reform -- evidence-based strategies that help all children secure the high-quality public education they need and deserve.

Yesterday in Topeka, Kansas, I joined in commemorations of the landmark Supreme Court decision that originated when 8-year-old Linda Brown sought to attend her all-white neighborhood elementary school. Sixty years later, Kansas still has separate school systems, disparities that have only grown as state aid to school districts has shrunk by $263 million since 2008 to pay for tax breaks for corporations and the wealthy.

Likewise, in Boston, Chicago and Philadelphia, hundreds of AFT members and community partners held rallies, then fanned out across neighborhoods, talking to residents about the need for full funding to support neighborhood public schools and asking them to take action in support of educational justice.

The fight for all children to have access to an excellent education is the Brown decision's legacy. It requires a focus on equitable access and resources, evidence of effectiveness, and scaling and sustaining successful practices. Two districts doing that are St. Louis (Mo.) Public Schools, with its emphasis on high-quality early childhood education, and Cincinnati Public Schools, where every public school is a community learning center offering supports ranging from healthcare, to legal and housing assistance, to mentoring.

St. Louis recently greatly expanded its early childhood programs, which decades of research show can produce significant educational and economic benefits. Such programs help level the playing field for disadvantaged children, a particular concern in this district where 82 percent of students are African-American and 88 percent live in poverty. The AFT Innovation Fund has awarded AFT St. Louis and the school district a three-year, $450,000 grant to provide training in best practices in early education for teachers and paraprofessionals.

Cincinnati's successful community schools approach demonstrates that while poverty matters in education, its effects can be mitigated. Ten years ago, one of every two students in this high-poverty district did not complete high school. Today, the graduation rate has surged to 80 percent. Achievement gaps between African-American and white students are narrowing. Student mobility, which can be so disruptive to a child's education, is down. And discipline referrals have dropped sharply -- keeping students in school, keeping them learning.

I am proud that my hometown local, the United Federation of Teachers in New York City, is working with Mayor Bill de Blasio to enact universal prekindergarten, significantly expand the number of community schools, and reach a tentative contract that enables neighborhood public schools to collaborate and innovate once again.

Sixty years ago, the Supreme Court ruled that states must end school segregation with "all deliberate speed." It's painfully clear how inadequate and overdue action has been. While Congress is polarized and many pundits simply take potshots, educators, parents, unions and concerned citizens are working to create opportunities so that all kids, of all races and income levels, can succeed.