How do you celebrate Earth Day, when your homeland or homeplace has been stripmined into oblivion?

For my family, standing in the ruins of our 150-year-old homestead in the devastated historic community of Eagle Creek, in the Shawnee Forest of southern Illinois, we turned to guerilla reclamation: My billie boys, the 9th generation of Eagle Creek ancestry, planted the first native plum trees on the unmanaged grassland reclamation site, in what was once one of the most diverse forests in the nation.

We raised the dead on Eagle Creek for Earth Day this year. 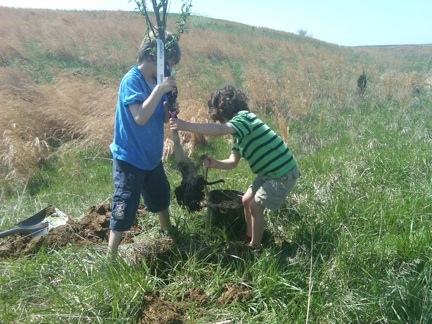 Ten years ago on Earth Day, the scene was entirely different. 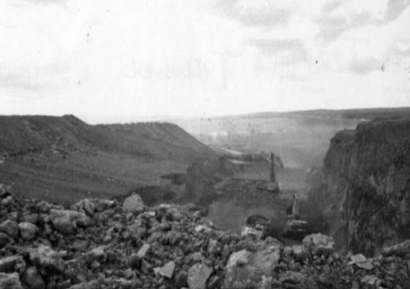 I stood with my mother and Uncle Richard at the rim of a lunar expanse of ruts and rocks and broken earth. We had to protect our eyes. A dark wind swept along the ridge. Howling little eddies of fury. Huge trucks stormed in all directions. It looked like an earthquake had devastated the area.

How green was our valley of Eagle Creek, when my mom and I last walked these hills together. Corn and sorghum tassels had jutted out from the slopes like ancient signposts. The rolling forests seemed eternal in those days, protected by sentries of hickory, oak, maple, gum, beech, dogwood, and wild grapevines that thickened up the ramparts of Eagle Creek with the intrigue of danger.

Our family homestead, known since 1849 as the Oval Hill Farm, sat on a knoll in the eastern shadows of the Eagle Mountains, which withdrew to the upheavals of 400- million-year-old faulted ridges that were older than many American ranges. Our ancestors had first moved into the area in 1805. On the southeastern horizon, the promontory outlook of the federally protected Garden of the Gods Wilderness area, one of a handful of such protected areas in the American heartland, retreated into the traces of the Shawnee National Forest boundaries that looped around the panhandle of our hollow with the intransigence of a national border.

On a clear day, as a child, I once pretended to be an eagle and took ﬂight down the hill, rose above the forests, and soared beyond the Ohio River and Kentucky, which lay only twenty miles away.

"I can't believe this," my mom whispered.

We could see the route of destruction. The ﬁrst explosions had taken place in the summer of 1998. The coal company had set off the ammonium nitrate-fuel oil blasts in the surrounding Eagle Creek valley, gnawing away at the edges of our family hill. One thousand six hundred pounds of explosives sat in each hole like a land mine, set to ripple across the valley with enough thunder to bring down the walls of Jericho.

The Wisconsin glaciers that had encamped on the Midwest never reached our boot-heel range of southeastern Illinois. The dense forests crowning our hillsides and hollow, like most of the Shawnee hill region from the Mississippi to the Wabash River, once rivaled Appalachia or the Ozarks for plant diversity. Some even called it the Illinois Ozarks. It was that rare main chain of mountains and hills to stretch east to west. Over 1,100 plant species, 270 birds, two score of mammals and reptiles.

Then came the reckoning on our hillside along Eagle Creek. After harassing and intimidating our last remaining cousin on Oval Hill, a coal mining company had bought most of the hollow where my extended family had lived for two centuries and blasted away the old homeplace.

The throttle of machinery, an industrial cocktail of explosives, and a handful of large equipment drivers removed our Oval Hill farm and leveled the ridge by the end of the fall. Flattened the knoll to its knees, and then to ashes. The old pond, the four native plum trees, the sorghum and cornﬁelds, the garden, the barn, and the 150-year-old log cabin were buried in a crater formed before the Paleozoic era.

Despite all of the laws and regulations on the books for stripmining and reclamation obligations, a 2006 study in the International Journal of Mining, Reclamation and Environmental examined 80 years of reclamation efforts and came to this conclusion: The forests and the fertile farmlands are not coming back. The report found: "Mined land cropped for bond release commonly becomes unmanaged grasslands. Scant mineland is returned to trees, with survival and growth poorer than on reclaimed minelands pre-regulation. Problems include high soil strength, poor water relations and excessive ground cover. Sustainable plant communities have not developed."

My little boys planted the first trees in the ruins of Eagle Creek.

An estimated 960,000 tons of coal were stripped from our ancestor's original farm and adjoining areas. Shipped to a medium sized coal-ﬁred power plant, it would have generated roughly 2.06 MWe of electricity, based on typical estimates of burning coal. That would have been enough electricity to supply American demands for approximately four and half hours.

That was the exchange rate of our dirty energy policy for my family, like tens of thousands of Americans besieged by stripmining in 24 states and several Native American reservations: 200 years of history, for four and half hours of coal-fired electricity.

This Earth Day, however, those four and a half hours marked the beginning of reclaiming our land, and heritage, from the coal industry.

Jeff Biggers is the author of Reckoning at Eagle Creek: The Secret Legacy of Coal in the Heartland.