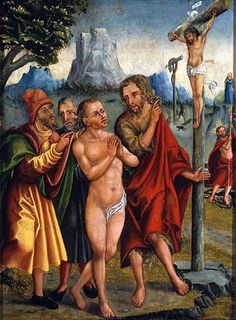 Allegory of Salvation by Antonius Heusler

"Salvation" is often a dirty word in progressive Christian circles, but when abandoned, it leaves a void for others to fill. Instead, we need to boldly reclaim it.

In American culture, its dominant usage revolves around the phrase "being saved." Left assumed and implicit is the "from what" we are being saved: hell. Yet for those of us who dismiss a literal hell of fire and torment, we rarely replace what we are being saved from. Talking about salvation feels irrelevant if you dismiss the problem it was meant to solve and replace it with nothing.

But who said the problem had to be hell? In the Exodus story, the Hebrews are saved from Egyptian slavery and saved for freedom in the Promised Land. They celebrate God as their savior who delivers them from their tormentors. There's no hell in sight! Every reflection on salvation worth its salt has a two-fold stance: saved from something bad (like slavery) and saved for something good (like freedom).

Progressive Christians in particular emphasize problems in this life from which we need healing and a salvation that is addressed to a collective audience. Individual healing happens, yes, but it comes out of a community context. For example: undocumented immigrants need to be saved from the fear of having their families forcibly separated by the state and saved for being able to live in security as a part of vibrant communities of opportunity. Did you see how that worked?

Let's take another example: life on this planet needs to be saved from ecological devastation and climate disruption and saved for its flourishing now and into the future. Here salvation addresses life beyond even human boundaries!

The two-fold rhythm of being saved from and saved for is the core of rethinking salvation. We can make the pattern slightly more complicated by adding when it happens -- now or in the future -- and how it occurs. Our example on undocumented immigration happens by people sharing their stories and standing up for their dignity and rights for themselves and future generations. Regarding climate change, salvation happens by working to end fossil fuels, which can save trillions of living creatures for generations untold.

It's in a collective liberation from oppression and for healing in this life where we find a living gospel. There are as many forms of salvation as there are problems in our world that need some redemption. Assumed here is that the spiritual and the social cannot be separated, for they are part of a single garment. Rending them asunder inevitably weakens the power of both.

I leave you with a fill-in-the-blank salvation game. Give it a try! Where does the gospel appear in your community's life?

(Someone or group) needs to be saved from (clear problem) and for (the good stuff) (when) by (how).