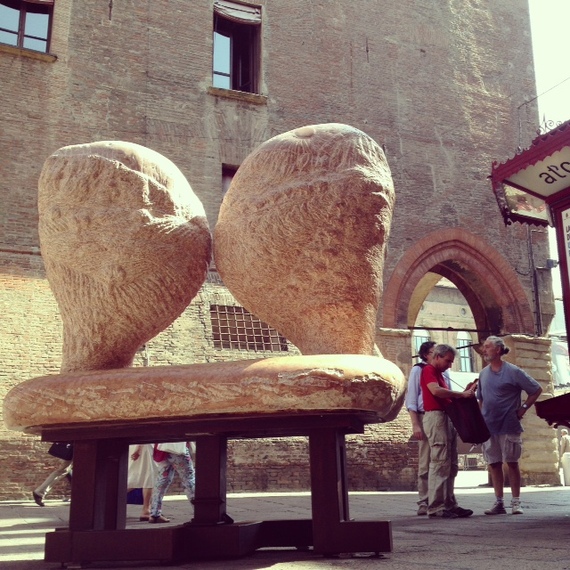 "Sculpture thrives on its rapport with the city," Lydster told me in an interview, in Piazza 4 Novembre, in the heart of the city, "and an eco-sustainable environment highlights that relationship."

"The urban centers, particularly the treeless and plant-less Italian ones are crying out for re-attachment to the natural world," said Lydster, who has lived and exhibited his work in Bologna and throughout Italy since the early 1980s. "To bring to a specific public site a three-dimensional image of a natural scene, itself attached to the stars, is, I think, a way of opening up a dialogue between the individual and a much greater realm of awareness."

Over the past decade, Lydster has created a series of "headscapes" exhibits that have drawn critical praise for what the New Zealand-born artist calls the "meeting point of art, nature and the mind." Various formations of the headscapes have been exhibited in several city squares, including Cortile Palazzo d'Accursio in Bologna and Torri dell'Acqua in Budrio. Another sculpture exhibit, "The White Riders," is currently on view at Galleria B4 in Bologna.

"We all have memories of experience in landscape," Lydster said, whose work has drawn comparisons to famed sculptors Henry Moore and Constantin Brancusi in our contemporary age of environmental concerns. "They are our link with the natural world. And also for that matter that which lies beyond it. Landscape offers a common ground on which human relations can be interwoven." 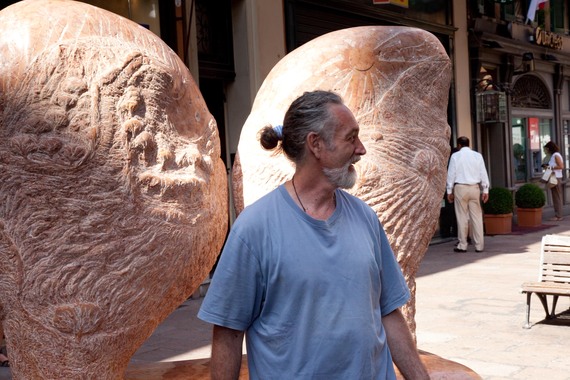 For his new work, Lydster brought this timely meeting point of art and nature directly to Bologna's historic center, with an original piece entitled "The Kiss." Featuring two meter-long abstract head figures, juxtaposed in a gaze, Lydster sculpted a natural landscape across the spherical surface, weaving the confluence of a river into a field. According to Lydster, the sculpture framed by the red-stone piazza walls provides "a link with the natural world" and the center of the city.

The symbolism of the rivers, in particular, Lydster said, serve as a reminder of Bologna's medieval waterways and largely overlooked underground watersheds today.

"Filled in waterways are intriguing," Lydster said, "like lost memories that we know are there."

The public art exhibit will remain in in Piazza 4 Novembre. Lydster completed "The Kiss" at the Fucine Vulcaniche, a comunal studio space in Bologna dedicated to the arts.

Below is the full interview with Lydster. 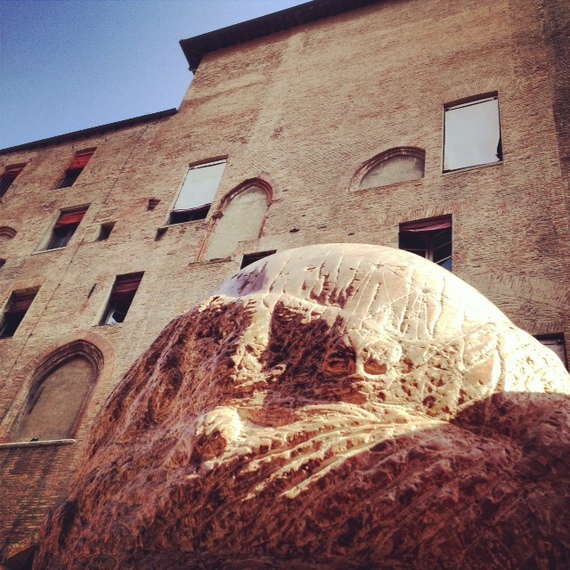 Jeff Biggers: The title of your piece, "The Kiss," seems to have several connotations.

Guy Lydster: I chose that title not so much because I wanted to represent something romantic or sentimental or even sensual, but because it allowed me to talk about the meeting point of something irresistible: the kiss between river water and the land. As a kiss I hope nonetheless that it is an intense moment of intimacy captured just before two natural elements merge the one into the other. I hope on a larger scale that this "primitive kiss" might also extend itself into a context of social unity, in particular those groups not readily embraced by Italian society. I thought a kiss sculpture might serve as an image of welcome in the broadest possible sense.

JB: How do you see the placement of this piece in the piazza, in terms of the role of public art? What do you hope the public sees in your work?

GL: It is important for me that this sculpture is placed right in the urban heart of Bologna. Piazza 4 Novembre. Just off Piazza Maggiore. My intention was to bring an image of the way in which landscape lives within us right into the centre of the city. A kiss between two large heads bearing two different kinds of landscape I hope will strike a vital cord in the observer. We all have memories of experience in landscape. They are our link with the natural world. And also for that matter that which lies beyond it. Landscape offers a common ground on which human relations can be interwoven. It is a classless realm where we are all the same. An urban center, even a medieval one, can provide access to primordial experience that has possible links to our social existence as human beings.

JB: Tell us a little bit more about the evolution of your heads, and why you've chosen the figure of the head as your canvass?

GL: "The Kiss" is a turning point in my representation of mind and nature. I started as a portrait artist. I simplified anatomy to a sort of egg form. Marks recalling landscape drawings formed on the round surface. I took this as an invitation to carve images of nature as base relief in the round that encompassed the sphere of the head. It is important that these traces of memory are seen as something that is alive, something that continues to live and evolve within us. Changing us from within, perhaps imperceptibly. I would now like to extend this same concept to the standing figure.

JB: How can "headscapes" and public art bring together urban landscapes with nature?

GL: More so than parks where nature is dominant anyways, the urban centers, (particularly the treeless, grassless, and plantless Italian ones) are crying out for re-attachment to the natural world. To bring to a specific public site a three dimensional image of a natural scene, itself attached to the stars, is I think a way of opening up a dialogue between the individual and a much greater realm of awareness. An observer standing in a specific spot in the city might see in himself the same tree roots and the same shooting stars that are there, in the same sunlight that illuminates the relief itself. Perhaps in poetic terms I'm saying that a citizen, if he wants, can become highly aware of where he is actually standing and as he does so he somehow feels connected not only with the cityscape around him, and but also to the cosmos etched into the marble. Maybe for a split second he feels he has a place in all of these realms. Then he moves on and goes to the pharmacy.