The year 2012 was a terrible time for the planet, according to a new report released by the American Meteorological Society this week.

Edited by scientists at the National Oceanic and Atmospheric Administration, the 2012 State of the Climate report revealed that Arctic sea ice reached a record low, while sea levels and greenhouse gases from fossil fuel burning hit all-time highs last year.

2012 was also one of the top 10 warmest years on record globally, according to the report, which received input from hundreds of climate experts from more than 50 countries. The United States and Argentina specifically experienced their hottest years ever.

"The findings are striking," said Kathryn Sullivan, acting administrator of the NOAA, according to the Agence France-Presse. "Our planet as a whole is becoming a warmer place." 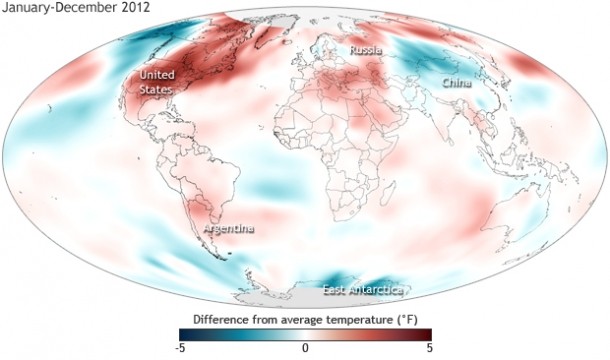 Sullivan told the Associated Press the report reveals "remarkable changes in key climate indicators," including the dramatic melting of Arctic and Greenland ice.

Per the media release that accompanied the report:

Conditions in the Arctic were a major story of 2012, with the region experiencing unprecedented change and breaking several records. Sea ice shrank to its smallest “summer minimum” extent since satellite records began 34 years ago. In addition, more than 97 percent of the Greenland ice sheet showed some form of melt during the summer, four times greater than the 1981–2010 average melt extent.

Greenhouse gases also continue to be a concern. "Major greenhouse gas concentrations, including carbon dioxide, methane, and nitrous oxide, continued to rise [last year]," the report said, pointing out that a new record for CO2 emissions from fossil fuel emissions has been estimated for 2012.

"It's hard to read the report and not be led to the conclusion that the task of reducing carbon emissions is now more urgent than ever,'' said Michael Mann, a climatologist at Pennsylvania State University, who was not involved in the research, according to AFP.

"A lot of people like to say that global warming stopped in 1998, and that's said because temperatures have gone up pretty slowly," climatologist James Renwick, a co-author of the report, told the New Zealand Herald. "But ice has been melting more rapidly, more heat is going into the ocean and the sea level is rising faster. All of those things indicate that the climate system as a whole is continuing to warm up -- and warm up faster as we go along."

Go to the NOAA website to read a summary of the report. The full report is available here.