No, it's not a crock: Two hunting parties in Mississippi both bagged alligators weighing more than 700 pounds.

Only three days into the start of Mississippi's alligator hunting season, NBC News reported that Dustin Brockman of Vicksburg and his hunting party nabbed a record-breaking 13-foot, 727-pound gator on Saturday.

Brockman's massive catch broke the previous state record. Beth Trammell caught a 723-pounder only an hour before, according to the Mississippi Department of Wildlife, Fisheries and Parks.

The epic battle between Brockman and beast took two hours to win. He and his party chased the behemoth by motorboat along the Mississippi River. They were able to get close enough to spear the scaled creature with a crossbow before finally blasting it with a shotgun. 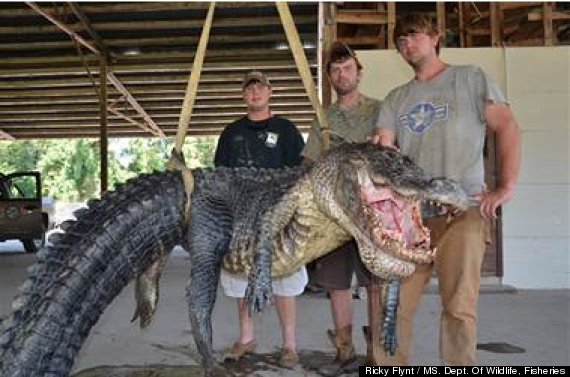 Brockman and his team pose with their massive 727-pound alligator

Trammell, who was hunting in a six-person party in Redwood, said it took her team four hours to get their gator in the boat.

“We had to flag another boat down to help us out it was so big," she said.

Both teams hunted their prey at night because it's easier to spot the reptiles' reflective eyes with a flashlight.

"In the daytime, if they're lying on a bank underneath the tree, you ain't going to see them," Brockman said.

Brockman said it took his team a total of about four-and-a-half hours to bring the beast to shore after first spotting it.

"He broke all the lines we could put in him," Brockman told MSNewsNow.com. "Finally put a snare on him and got him up high enough and put a shot on him."

Prior to Trammell and Brockman's catches, the previous weight record 697 pounds. The current length record, which has yet to be broken, is 13 feet, 6.5 inches.

Both gator-hunters said they planned to eat the meat and give it out to friends. Brockman plans to use the gator's skin to make a gun strap and a picture frame.