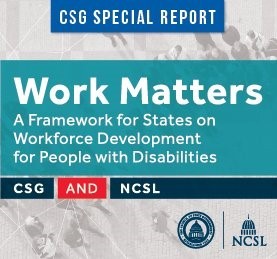 Cover of CSG Report on Jobs for People with Disabilities

According to the National Trends in Disability Employment (nTIDE), now marks the longest run of employment gains for Americans with disabilities since the Great Recession. Indeed, in the Bureau of Labor Statistics (BLS) Jobs Report released this week, the employment-to-population ratio for working-age people with disabilities increased from 26.6 percent in December 2015 to 28.7 percent in December 2016 (up 7.9 percent; 2.1 percentage points). Those are still horrific numbers. But finally, the trend is going in the right direction.

"For the ninth consecutive month, we see improvement in the employment-to-population ratio for people with disabilities; the longest stretch ever seen since the BLS started publishing disability employment statistics in October 2008," noted John O'Neill, PhD, director of employment and disability research at Kessler Foundation. "These improvements in the employment situation for people with disabilities in 2016 were better than the gains we saw last year. Let's hope that this trend continues and we are able to reach pre-recession employment levels in 2017."

The good news comes just after the National Task Force unveiled a major report that outlines best practices and policy recommendations to help states remove employment barriers for people with disabilities. The Council of State Governments teamed with the National Conference of State Legislatures in the effort. The State Exchange on Employment Disabilities, or SEED, initiative of the U.S. Department of Labor's Office of Disability Employment Policy funded the effort. Nebraska state Sen. Beau McCoy, the 2016 CSG national chair, and Delaware Gov. Jack Markell, the 2016 CSG national president, co-chaired the task force.

"CSG is proud to play a lead role in facilitating this initiative," CSG Executive Director/CEO David Adkins said. "But I would be the first to tell you that this effort is not CSG's alone."

The task force unveiled the 96-page report titled, "Work Matters: A Framework for States on Workforce Development for People with Disabilities," at the Disability Employment Policy Academy during the 2016 CSG National Conference.

Adkins, who opened the Policy Academy, said the workforce must reflect the diversity of society.

"When we think about workforce development just generally, it may not be specifically focused on people living with disabilities. But to me, it's all about realizing potential," he said. "When anyone is excluded, potential is left unrealized."

About 1 in 5 Americans live with a disability and there are 22 million working-age Americans with disabilities. But many adults and youth with disabilities are unemployed or underemployed despite an ability, desire and willingness to work in the community and contribute to the economy.

The task force convened four subcommittees focused on policy areas that impact the employability of people with disabilities: Career Readiness and Employability; Entrepreneurship, Tax Incentives and Procurement; Transportation, Technology and Other Employment Supports; and Hiring, Retention and Re-entry.

Markell encouraged state policymakers to take action using the report. He said states cannot thrive if some people who want to contribute are left on the fringes.

The full report is available online.

My favorite part of the report, which is full of helpful and practical advice, is its guiding principles. The report states: "Disability is a natural part of the human experience that in no way diminishes one's right to fully participate in all aspects of community life. As such, state disability policy should consider support of the following four goals:

Equal opportunity, including treating people with disabilities as individuals, making assessments based on facts, objective evidence and science, and providing effective and meaningful experiences in the most integrated setting appropriate.

Full participation in society, including engagement of people with disabilities in relevant decision-making at the individual and systems levels, self- determination, self-advocacy and informed choice.

Independent living, including skills development and long-term services and supports. Disability can develop at any point during an individual's lifetime and have varying impacts. As such, state agencies should ensure service delivery is relevant at all ages, is inclusive of all types of disabilities, and maximizes the strengths and abilities of the individual. States should also consider providing a centralized systems navigation process so that people with disabilities and their families have a place to ask questions and get answers about rights, responsibilities, services and supports.

Successful disability policy embraces the "nothing about us without us" principle. Individuals with disabilities, alongside families, advocates and champions from agencies, education, business and communities, should be engaged throughout the policymaking process at all levels. This includes increasing the actual participation of people with disabilities at the highest levels of state government. People with disabilities are underutilized in our workforce and frequently experience social and economic disadvantage. There is strong rationale for including people with disabilities in public policy efforts targeting other underrepresented groups like veterans, women and minorities.

People with disabilities have valuable and unique contributions to make. State disability employment initiatives have the best chance at success when employers are motivated to hire people with disabilities not because they have to or because it's the right thing to do, but because they recognize that disability inclusion helps boost the bottom line through increased innovation, creativity and productivity".