Over the past few weeks, Americans have heard a debate about whether wealth should be redistributed, but the debate misses an important point. According to the recently released earnings reports of the five major oil companies (ExxonMobil, BP, Shell, ChevronTexaco and ConocoPhillips), they have already redistributed a huge sum of wealth from consumers to investors. The majors earned a record $125 billion in profits in the first nine months of this year, an increase of over $35 billion compared to the first nine months of 2008. In the first three quarters of this year they and distributed over half of their income (about $66 billion) to their stockholders in the form of dividends and stock buy backs. 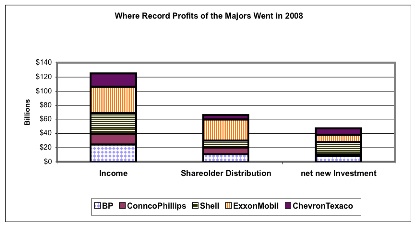 Over half of that total (over $38 billion) was devoted to buying back shares of their own stock. ExxonMobil, which set an all time record for profits by an American corporation in a single quarter, accounted for half of the total proudly declaring, "Earnings excluding special items were a record $36,240 million... The Corporation distributed a total of $30 billion to shareholders in 2008 through dividends and share repurchases to reduce shares outstanding" (ExxonMobil Corporation Announces Estimated Third Quarter 2008 Results, October 30, 2008, p. 6). The distribution to investors is substantially larger than the net new capital investment the majors made in finding and developing oil and gas and in refining crude. New investment equals capital expenditure minus depreciation and amounted to about $47 billion in the first nine months of 2008.

The unprecedented increase in oil industry profits in 2008 is the culmination of a six-year run up that has seen petroleum industry profits increase by more than 600 percent since 2002. Profits in the petroleum sector, which include oil and natural gas, will likely reach $180 billion, compared to about $30 billion in 2002. 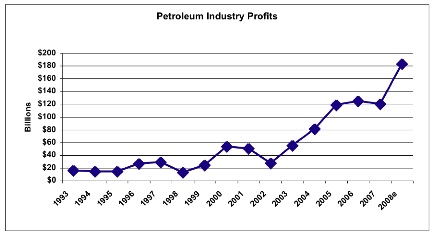 Consumers know the cause of these rising profits all too well -- rising gasoline prices. Even with the recent decline in prices, current gasoline and diesel prices are at historically high levels. Diesel is not only a transportation fuel, which is growing in popularity, it is also used for home heating in many Northern states and plays a large role in the transport of goods. In the last week of October 2002, gasoline cost $1.48 per gallon and diesel cost $1.46. The Energy Information Administration reported a figure for gasoline for the week ending October 27, 2008 of $2.72. For diesel the figure was $3.29. 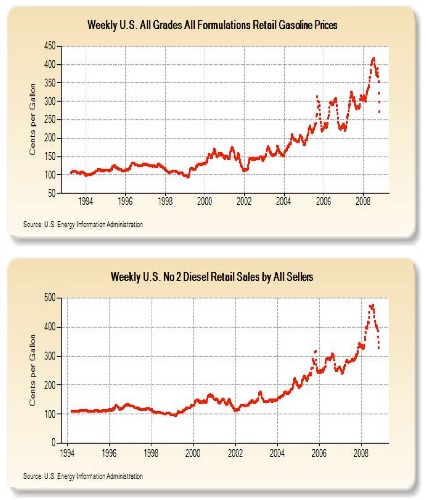 The relentless increase in gasoline prices has taken a huge bite out of consumer pocketbooks. Annual expenditures on gasoline and motor oil have increased by well over $1,300 dollars in the past five years. 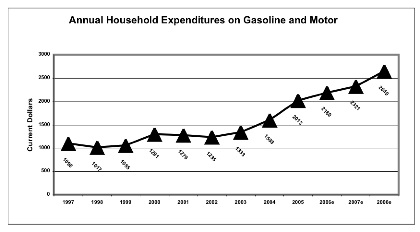 Source: Bureau of Labor Statistics, Consumer Expenditure Survey, various years; Consumer Price Index, to update expenditures from 2006 to 2008. To estimate expenditures for 2007 and 2008, average gasoline prices are used, as reported by the Energy Information Administration. Demand is assumed to have decline by 2.5 percent per year. Prices are set at $3.35 as the average for 2008.

Prices are Higher than they Should Be: The Crack Spread

Because refineries produce about three gallons of gasoline for every two gallons of diesel, analysts frequently look at the 3-2 crack spread to discuss the value of oil products. The very high oil prices in the second quarter did put pressure on the crack spread, but that only lasted a few weeks. In recent weeks the industry has pushed the crack spread back up. The crack spread today is about twice what it was before the merger wave allowed the industry to get market power. When the spread is $0.30 to $0.40 per gallon higher than historic levels, consumers are pay $5 to $7.5 billion dollars a month more for these products. 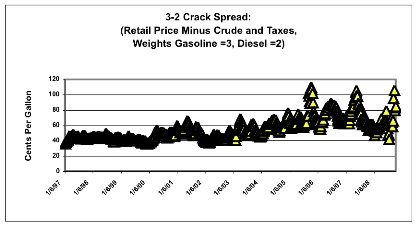