Mainstream media should pay closer attention to the report published by The Center For Public Integrity that states, "The Bush administration led the nation to war on the basis of erroneous information that it methodically propagated and that culminated in military action against Iraq on March 19, 2003." The report questions the source of the disseminated misinformation, and more importantly, highlights the consequences of subsequent incidents:

President George W. Bush and seven of his administration's top officials, including Vice President Dick Cheney, National Security Adviser Condoleezza Rice, and Defense Secretary Donald Rumsfeld, made at least 935 false statements in the two years following September 11, 2001, about the national security threat posed by Saddam Hussein's Iraq. Nearly five years after the U.S. invasion of Iraq, an exhaustive examination of the record shows that the statements were part of an orchestrated campaign that effectively galvanized public opinion and, in the process, led the nation to war under decidedly false pretenses.

During the last five years there have been many journalists, activists and former officials, who have been consistently warning us about unreliable statements and lies about Iraq and other national security issues, made by top ranking officials. We are conditioned to accept what "a high ranking official" says as gospel, in spite of these precautions, without questioning the reliability of the sources, and continue to believe erroneous statements we hear and read in newspapers, radio, and TV channels. 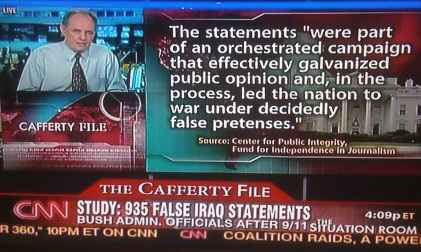 Despite the difficulty in finding the truth in minefields of lies and fabrications, maintaining integrity and remaining objective is now more vital than ever, especially for journalists. There are grave consequences for a society when a faction of mainstream media becomes part of an administration's propaganda machine and leads a nation astray; conversely, fighting for truth and maintaining journalistic integrity has its price as well, as in the case of Phil Donahue whose show was canceled when he openly opposed the attacking Iraq on his program, or Jeff Cohen who lost his job for taking a stance against the war in Iraq. Regardless, if we as journalists cannot catch and take stance against over 395 lies, who can?