As was the case for other large carnivores in the lower 48 United States, by the 1960s grizzly bears were nearly extinct. This species had dropped to less than 2 percent of its former range south of Canada and occurred in six small, discrete populations, totaling 800-1,000 individuals.

In response, the US federal government listed the grizzly bear as "threatened" under the new Endangered Species Act (ESA). In 1983, Congress approved a recovery plan and convened the Interagency Grizzly Bear Committee. 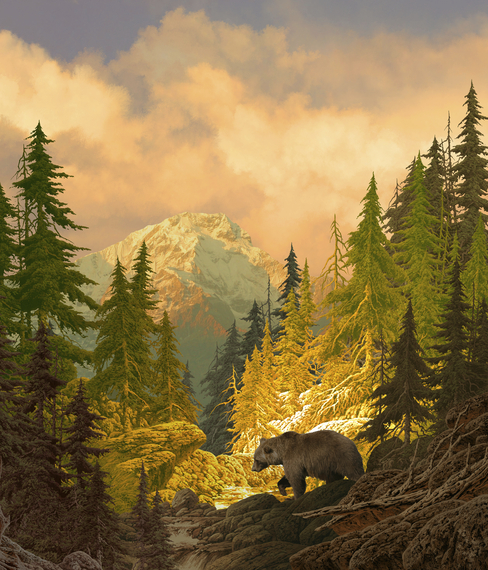 Protection worked. Between 1975 and 2007, Yellowstone's grizzlies increased from 136 to 571, inspiring US Fish and Wildlife Service (USFWS) to delist the species in 2008. The Greater Yellowstone Coalition sued, due to inadequate regulatory mechanisms post-delisting and whitebark pine decline.

While grizzly bears can eat over 270 different foods, they require high protein at specific times of year--such as before hibernation. Protein-rich, high-fat items like pine nuts enable them to pack on pounds. For breeding females, body fat determines their ability to reproduce. Pregnant females going into hibernation with insufficient body fat absorb their fertilized eggs. Given the importance of whitebark pine to this species, scientists linked grizzly bear reproductive decline to climate change.

Due to federal failure to apply best science, US District Judge Donald Molloy ruled in favor of relisting the species. He then asked USFWS to look further into the relationship between whitebark pine and grizzly bear demography.

Meanwhile, from 2008 to 2012, grizzly bear numbers in the Greater Yellowstone Ecosystem (GYE) held steady at over 600. Some experts believe this population has reached carrying capacity and that because the grizzly is an omnivore, whitebark pine decline is unlikely to have a negative impact on it. For any species, recovery hinges on the portion of the population capable of reproducing, called the ecologically effective population. Species with a low reproductive rate, such as the grizzly bear (which doesn't begin to reproduce until the age of 6-8 years, and then only has 1-3 young every 3 years), will have a low ecologically effective population. For example, a population of 100 bears may have only 15 reproducing females. Scientists have identified sustainable mortality for females with cubs of the year of 4 percent. Based on new science, in 2013 USFWS adjusted this to 7.6 percent, although not all agree.

How one counts grizzly bears has emerged as a leading delisting challenge. In 2013, USFWS found 741 grizzlies roaming the GYE, well above the recovery threshold of 500. However, this count may be biased because whitebark pine and cutthroat trout declines have altered bear feeding patterns, driving them to alternative high-protein, high-fat foods, such as army cutworm moths. The moths live on open, rocky slopes, above treeline. According to Daniel Doak and Kerry Cutler, bears eating moths are more visible and easier to count, making it seem like their numbers have gone up. These scientists suggest that the GYE grizzly population has probably increased far less than is believed. In 2013 in response to questions about habitat, climate change, and how one counts grizzly bears, USFWS published several recovery plan supplements.

Since 1981, grizzly bear recovery has entailed an extensive transboundary, collaborative effort. In the US post-delisting, the states will be responsible for management of the species. Each of the three states (Idaho, Montana, and Wyoming) in the GYE has a grizzly bear management plan. The plans call for establishing a primary conservation area and managing toward an overall population of 500 individuals, with at least 48 breeding females. Post-delisting, these states eventually will allow them to be hunted. 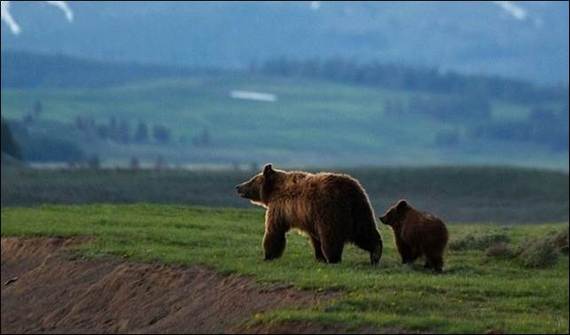 But recovery isn't just about numbers. The long-term future of the great bear will be based on the support of people who live, work, and recreate in this species' habitat. To be effective, grizzly bear conservation must happen at the grassroots level. The potential for conflict on ranchlands and leased grazing allotments makes such an approach crucial. In the GYE between 1992 and 2000, 44 percent of bear-human conflicts had to do with livestock depredation. Depredation peaked prior to hibernation and occurred independently of wild food availability.

For decades, Montana Fish, Wildlife, and Parks grizzly bear management biologists Tim Manley and Mike Madel have worked tirelessly to help people and bears coexist. They arrive on the scene when there's a problem, help keep problem bears alive, patiently answer questions, and offer suggestions for making homes and ranches more bear-proof. Such ongoing efforts are essential as we move toward delisting.

A new delisting proposal is expected soon, which will reignite the debate. In the meantime, scientists continue to add to what we know about this controversial species' needs. Because of their omnivorous diet, grizzly bears are likely to adapt to climate change--provided we give them a chance. This will require applying the precautionary principle in defining recovery and how we live with the great bear.