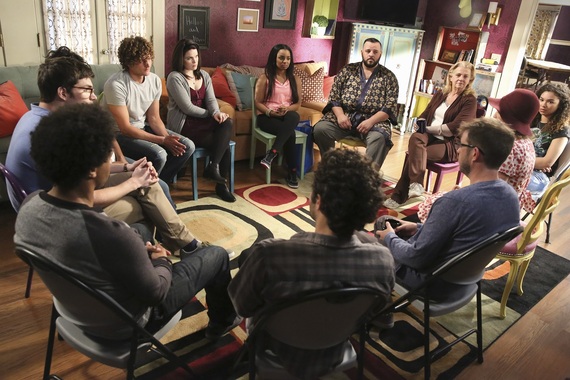 In the beginning of 2015, I wrote a post titled "Can We Actually Talk About Recovery This Year?" where I highlighted the enormous disparity between the amount of addiction we see in our news, media and entertainment, and the amount of recovery we see. Simply put, I argued, our collective perceptual experience around chemical dependency seems to skew negative, and largely because it's driven that way by the stories we read, the shows and movies we watch, and the images we see. In essence, I was suggesting that ratings and clickability have apparently tended to favor the bad news, and by doing so have limited an important discussion about what the other side of addiction can look like -- a life in recovery.

Little did I know while writing that piece that my volunteer work with the Entertainment Industries Council (an organization that works to promote accurate and authentic depictions of major health and social issues by the entertainment industry) would soon allow me to contribute my time to exactly the kind of thing I said we were missing: a TV show about recovery. Now, one year later and an entire season of scripts read, I can tell you that at least one network is finally, boldly turning a corner, past our myopic and exclusive focus on the problem, and onto a path about finding the solution -- a path known as Recovery Road.

Premiering Monday, Jan. 25 on Freeform (the new name for ABC Family), Recovery Road is a long overdue show that will finally give faces and voices -- and a primetime slot -- to the struggles of millions of Americans whose story is too seldom told, but too often told through the lens of stigma, shame, embarrassment and otherness.

To briefly explain why this is such a groundbreaking and important show, I'll start with an overly-simplified and recklessly non-comprehensive plot summary:

Based on the popular young adult novel of the same name, Recovery Road is the story of a teenager named Maddie who is sent to a sober living facility as a result of her addiction to alcohol and other drugs. As with most alcoholics and addicts, Maddie's backstory is an unfortunate confluence of events, traits, choices and behaviors that lead to an onset of the progressive and life-threatening disease of addiction.

As you might expect if you've ever known someone struggling with addiction, Maddie doesn't think her drinking and drug use are really a problem, and, even if they are, they aren't a big enough problem to warrant something as insane as being sent to a sober living facility. True to form for the mindset of many addicts confronted with the reality of their situation, "you must be out of your damned mind" is Maddie's authentic -- though indubitably sanitized for television -- response when she first learns that she is being mandated to a fate of sober living by Cynthia, a guidance counselor with deep knowledge of what it takes to stop drinking.

When she arrives at the house and begins to settle in, we meet Wes, Trish, Vern, Rebecca and others -- all recovering alcoholics and addicts trying to stay sober under the same roof and help each other do the same. We also meet Craig, the counselor/house manager who runs the place, and we get to know more about the struggles of Cynthia the guidance counselor, and Sharon -- Maddie's mom who embarks on her own hard journey of self-discovery and recovery as the parent of an addict. All told, the cast of characters on Recovery Road encompasses the diverse constellation of experiences, viewpoints, life circumstances and backgrounds that exist in our national story of addiction. Non-discriminatory in its scope, and unrelenting in its grasp, addiction is the equal opportunity disease that continues to sweep through our society without regard for who you are, where you come from, or what you want out of life for you or your family. In the cast of Recovery Road, we see all this, and more.

If, at this point, you're having a hard time contextualizing this idea or drawing comparisons between this show and other things you may have seen, that's because we haven't seen anything like it before. And that's the point. It's that fact alone -- that addiction and recovery are never more than isolated storylines or occasional subplots within a show's larger world or character's larger arc -- that makes Recovery Road so original, daring and timely. Addiction and recovery ARE this show's world. That uniqueness alone would make it worth tuning in for or bumping something else down the roster on your DVR, but it also happens to be great scripted drama with powerful, compelling and deeply human stories that unfold with the poignancy, complexity, and yes, even humor, inherent to the world of battling back from the disease of addiction.

To be clear, my role in bringing Recovery Road to the screen was comparatively small and limited. The fact that I even had a role, however, speaks volumes to the dedication of the producers, writers and actors to giving such an important subject the treatment and care it deserves. In short, my task was to review the script for each episode and then provide the team with feedback, guidance and suggestions around the depictions of drinking, using, and the world of recovery. Was a scene or depiction technically accurate? Was it responsibly handled? Was it authentic? These were the types of questions I was charged with answering, and my detailed feedback -- positive or negative -- was always met with the interest and appreciation characteristic of deeply invested stakeholders aiming for excellence. In the case of Recovery Road, those stakeholders hit their mark.

The opinions expressed are solely those of Patrick R. Krill. The author has no financial relationship with, or material stake in, the show or companies mentioned.