It's the electoral race of the century. Political maps are being redrawn, and rules are getting rewritten across the board. Fundraising records have been broken. The candidates are even comparing the size of their email lists.

The mainstream media is tripping over itself to report on every last press release and campaign announcement. But do any of us REALLY know what's going on?

With your help from the frontlines, HuffPost"s OffTheBus can change campaign coverage.

CAN YOU HELP US? Join OffTheBus' Special Ops team, and report back to us on what's happening in your town and state. 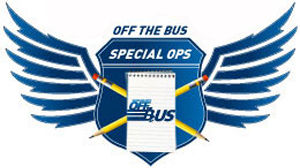 No traditional media organization can afford to dispatch reporters all over the country, and certainly not this "early" in the general election. But that's exactly what HuffPost"s OffTheBus, with 2500 members, can do.

Monday Sen. McCain opened a campaign office in St. Paul, Minnesota. Tuesday Sen. Obama set up shop in Orlando, Florida. Friday McCain and the GOP will cut the ribbons on their new HQ in Harrisburg, Pennsylvania. By next week scores of new volunteers and campaign staffers will be crawling all over the battleground states in search of votes.

We've got a real competitive advantage over traditional media, but that may not last long.

As an OffTheBus Special Ops recruit you'll receive a reporting assignment each week. We'll equip you with special reporting guidelines for each assignment.

The information you relay to us -- contact information for local grassroots leaders, event locations and details, and more -- will be stored in our database, and then made available as a resource to our members and writers.

Last October OffTheBus members dropped in on Sen. Barack Obama's Nationwide Canvassing Day from more than two dozen locations. Hours later every observer independently relayed to us that the economy, not the war, was THE voting issue. Twenty-four hours later we reported on the significance of the economy, beating the mainstream media to the punch by several weeks ("Reporting the Obama Campaign Coast-to-Coast: Democrats More Undecided Than Polls Suggest").

As our numbers grow, the same collaborative reporting model that got us the scoop on the economy may tell us a lot more about what's happening nationwide.

Join the team, and get your first assignment!