I have only met Melissa Carroll once. It was a few years ago. We were in a group show at Gitana Rosa Gallery in Williamsburg, Brooklyn. The theme of the show was male nudes. This was her piece: 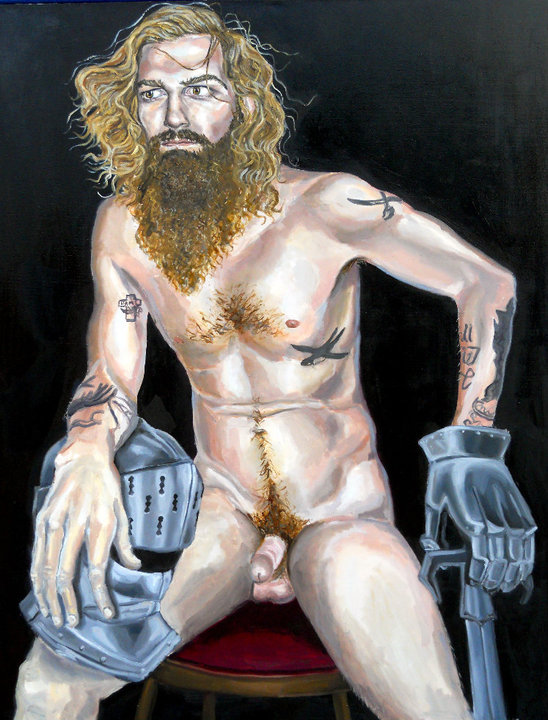 At the time, Melissa was in her late twenties, slim, dark-haired and pretty. She was distinguishable from a thousand Brooklyn hipsters only in that she was talented. She was working on portraits of her friends: 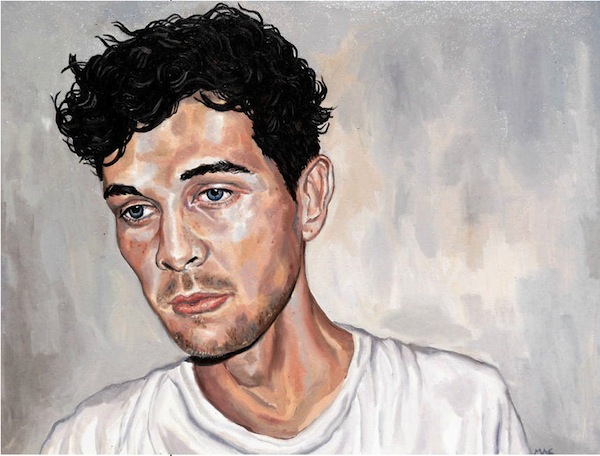 This work looked really promising to me -- I liked how she was breaking up the surface, and I liked her lines, and I liked that her own developing style was not eclipsed by the overwhelming artistic personality of her employer, Francesco Clemente. You could see where he was influencing her, and where his influence stopped. That takes some strength of will. I didn't think this was great work, but I thought it was very good work and headed in the right direction. So I kept track of Carroll. I wanted to see how her art developed.

Here's a self-portrait she painted earlier this year: 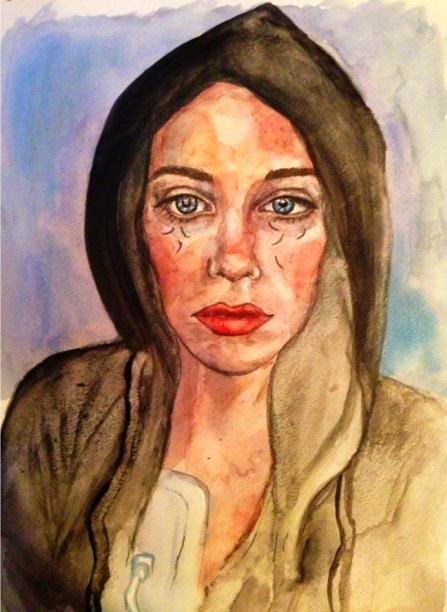 I imagine if you have the right experience with the topic, you'll immediately understand those disturbing tear-like arcs on her cheeks. For the rest of us, it takes a second to recognize that they are eyelashes. The piece is called Every Time an Eyelash Falls Out, I Make a Wish. Carroll is in chemotherapy here and she's losing her hair. Not long after I met her, a rare form of cancer was discovered in one of her feet. The cancer escaped her foot, and she has been in nearly continuous treatment for the past couple of years. She painted this watercolor during a renewed course of treatment for freshly-discovered tumors. Her hair had had time to grow back in, and then it fell out again. She's about thirty by now.

Restricted frequently to bed, and always to the most non-toxic and non-volatile of painting media, Carroll has been painting watercolor self-portraits throughout her illness. This body of work reminds me of one of the most terrifying sentences I have ever read, in Philip K. Dick's 1977 novel A Scanner Darkly:

I saw death rising from the earth, from the ground itself, in one blue field, in stubbled color.

Carroll's recent watercolors are fields of stubbled color, and when she looks in the mirror, she sees death emerging from the living ground of herself. 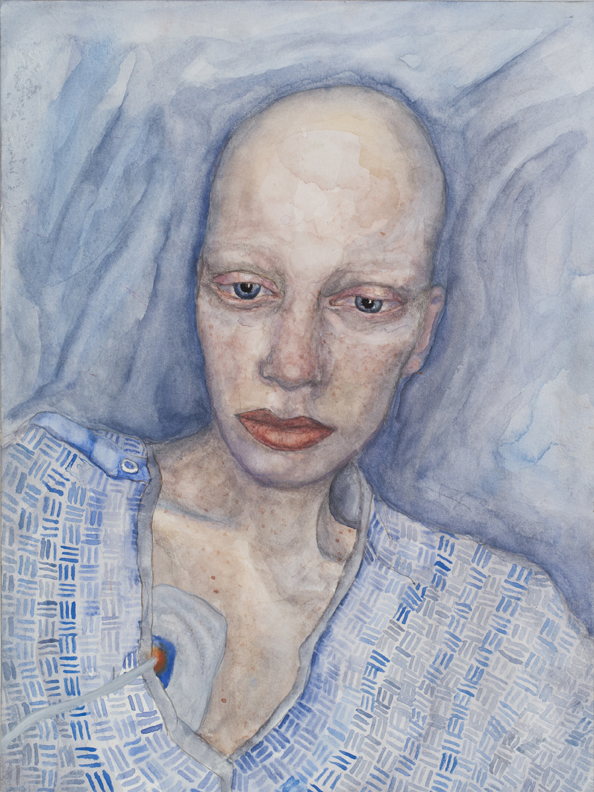 Consider an artist who is confronted abruptly with mortality. There are three possible paths the artist can take. She can turn away from art altogether. Or she can make sentimentally therapeutic pictures, which make her feel better for a little while, but contain little in the way of truth. Or she can demand real art from herself: the scouring away of illusion in favor of insight and recognition. That last is the most awful and difficult of the paths. It is awful because it involves direct confrontation with one's own extinction. And it is difficult because every synthesis it demands, of ideas, forms and images, must be won in the face of pain, fear, fatigue, discomfort and embarrassment. All of these forces oppose synthesis, because synthesis accomplishes unities, and these forces are forces of fragmentation and dispersal.

Carroll, lying in bed with few resources, has charted one of the core conflicts of the human experience: that we are born inside of living organisms, that death is inborn with us, that we are at war with it, and that it will win. Every one of our victories is temporary. 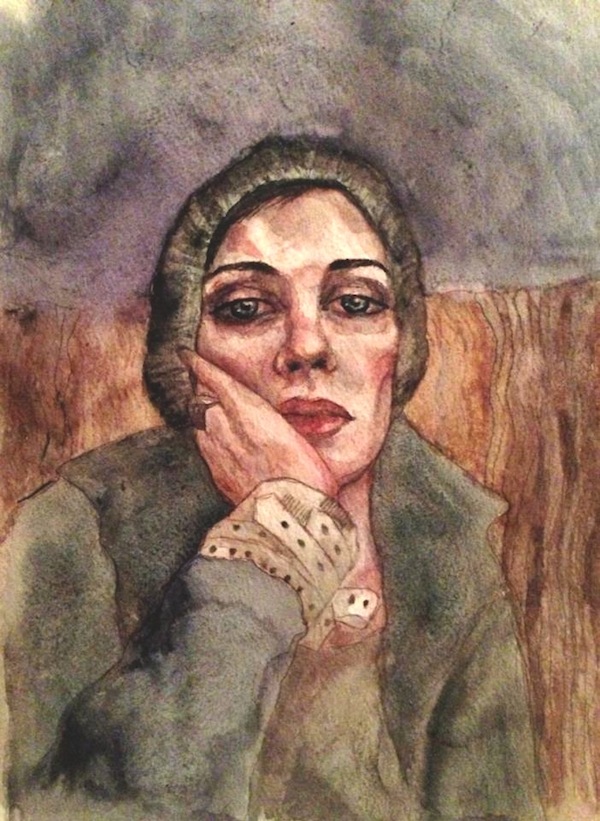 Confronting what to do with the very real possibility of abbreviated time, she made the leap from immature art to late-period art with hardly any intermediate work. Here she depicts herself apparently stunned with pain, eyes vacant and turned inward: 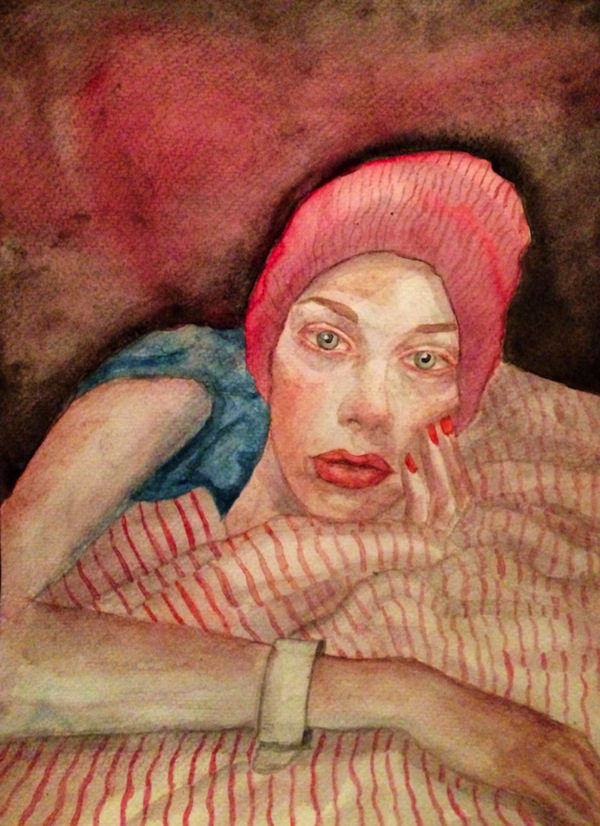 And here she portrays herself during a period of remission, when she was able to fulfill one of her concrete ambitions and visit India. 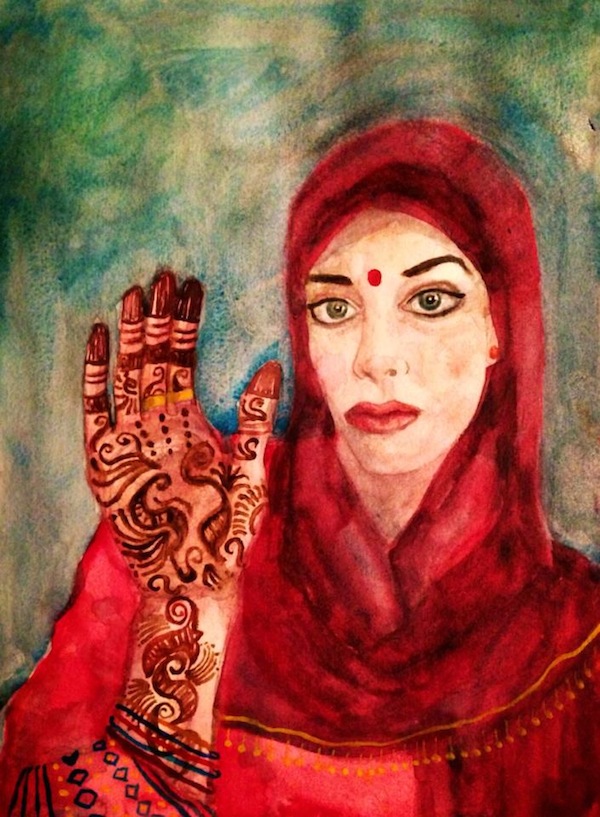 The swimming redness of the composition reads to me as if she -- not she as a person, perhaps, but she as a detached artistic intelligence -- has concluded that living is a matter of blood. The flowing lines of her robe are the circulation of the living blood. The refined lines of red mehndi on her hand represent what humanity brings to the basic phenomenon of life: order and beauty, but always built on the raw fact of blood. Contrast this with her subsequent departure from this brief window of health: 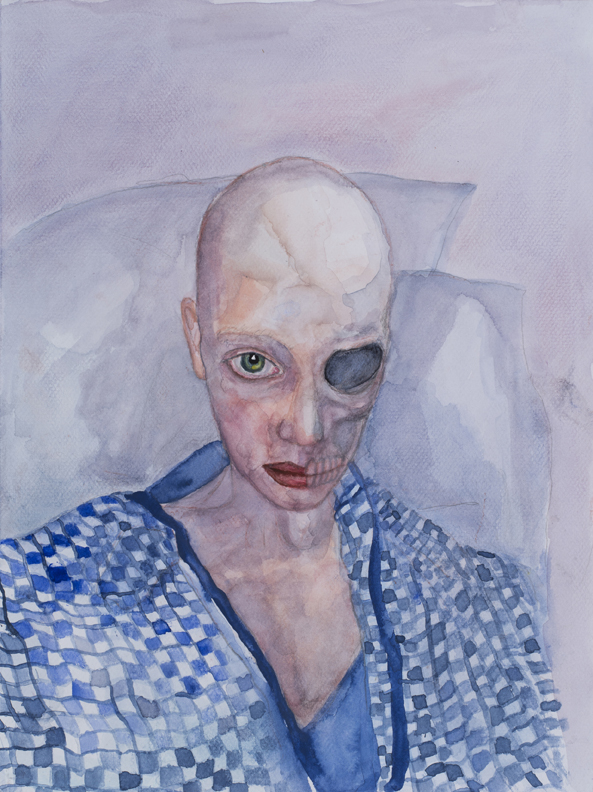 Sick again, she has returned to the blue field. The flow of blood is ebbing. I think you could argue she has overdone it in this piece, but if she has, then so have Klimt and Munch.

Let me tell you what it teaches me, and you can play that against your own experience with it and reach conclusions for yourself.

When I was 22, I had a heart attack. Sadly, this had nothing to do with cocaine or anything fun like that. No, it was some kind of random weirdness. I was kept in the hospital for several days while a team of doctors tried to figure out what was the matter with me. During this time, I had a second heart attack.

Before any authoritative conclusions could be drawn, I had a sensation of death prowling in territory very close to me. I might die anytime; the worst might not be past. I thought, "I had assumed I would live as long as other people live. But if I am a thing so constituted as to live only to now, would that be enough?" I reflected on what I had seen and done, and concluded that it would be enough. I hadn't wasted the time. It wasn't enough time, but I had done a little good with it. I was grateful for the period of reflection I was granted in those last days.

Many artists intuitively apply this doctrine. We joke that the B Minor Mass alone was enough to justify Bach's existence, or that Da Vinci could have quit after the Lady with an Ermine and considered his life worthwhile.

In light of this pitiless way of looking at things, Melissa Carroll has earned something few of us have: peace. She has been given little -- or rather, has had much taken from her -- and instead of despairing, she has made everything out of nothing. Consider again her Sick and Tired of Being Sick and Tired:

Here she joins the long line of artists, Picasso and Henry Moore most recently, who have linked baldness with death through the imminence of the clean skull. Opposing that finality, she traces the delicate mechanisms of thought, consciousness and emotion, playing out on the face as they transpire in the living mind. The picture is difficult to look at. The person in it is so clearly sunk in pain and illness. The wreckage of prettiness and health are naked, replaced by the austere beauty of the self-willed and the absolute. The hand which paints is brutally disciplined: economical, transparent, unflinching.

In depicting her condition, she has escaped it. Art has always been a nearly hidden little door in the side of the tunnel of suffering, and Carroll has opened it and gone out through it. With this single artifact she demonstrates soul triumphant over paint, over blood, over disease -- over matter. Whatever happens to her, she has redeemed her suffering in this piece, which she offers to a future in which her personal place is uncertain. She saves herself, and she shows us how it's done, if we care to do it too. Thus she justifies her passage here.

I would rather not be writing this today. Of course I wouldn't; I'm sure you would rather not be reading it. We all would much rather that Carroll were still noodling her way toward work of real significance through the thickets of first dates and rooftop parties and all the ephemera of youth in Brooklyn. I would trade Carroll's work today for work from her two thirds as good in fifty years. And I hope indeed that she will still be making work in fifty years -- imagine the work she will be making then! But what she has done so far is beyond time and quantity. Its wisdom and insight are among the real blessings human beings can give to one another.