After seeing the film It's Complicated, written and directed by Nancy Meyers and scheduled for release on Christmas, I reflected on the theme of the romantic comedy where the former husband and wife team, Jake and Jane have a hot affair 10 years after their divorce was final. They call it "divorced with benefits," a play-on-words from "friends with benefits." 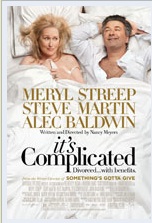 Why is it that the familiarity of an ex comes to the surface when one is lonely, has relationship problems of their own, or a holiday rolls around such as a birthday, Valentine's, or the period from Thanksgiving through New Year's?

I asked myself, why do relationships always have to be complicated? Members on Facebook who change their relationship status to "It's Complicated" usually have a wall filled with comments from curious friends as to why they changed their status. It's a juicy status to have on your profile and piques the curiosity of both singles and couples.

This subject has been on my mind all year as I personally heard from an ex-beau via a text message wishing me a Happy Valentine's Day. I was sure he had a new Valentine to celebrate the romantic evening with, but memories of the past Valentine's Day together came to the surface for him. He felt the need to reconnect. He said, it was the best Valentine's he had ever had. I replied with, "You tell that to all of the girls." I decided he was in recycling mode.

Fast-forward several months later to my birthday, and once again I heard from the same guy with a text message wishing me a happy birthday suggesting a date for the following week. It was affectionately signed, "Hugs" and his name. As one who doesn't believe in accepting dates from long lost loves via text messages, I deleted the message. I thought a phone call would have been more appropriate and wondered if every girl received a text message on her birthday.

In fact, what I believe was happening, is this man was clearly recycling his exes. You probably know the kind, but are not familiar with the term. It's the man who can't give up his black book and sends text messages on Fridays or holidays to the various women he has been involved with to get together, reconnect, or simply hook-up. The first woman to reply ends up being the Friday night date or the holiday girlfriend. Is it a relationship labeled "friends with benefits" or is it the recycling phenomenon I started witnessing first hand almost one year before the release of It's Complicated? I decided I wasn't a recyclable kind of a girl. I wasn't going back.

I pondered this concept for a while, until I ran into the text-messaging man six months later. He introduced me to his date, a beautiful woman he started dating just before the holidays. It wasn't a new love. She was a recycled girlfriend. It was proof-positive there was something to my concept of recycling an ex. Two weeks later, I saw the romantic comedy It's Complicated, nominated for three Golden Globe Awards. In the film, the chemistry from Meryl Streep and Alec Baldwin resurfaced at their son's graduation. Suddenly the two couldn't keep their hands off of each other. I decided it was time to share my theory of recycling the ex with you.

Does the chemistry between long lost loves go away and just reappear at the holidays or at special events? Is recycling the ex now going to be acceptable? Is the grass always greener? Was it just the oxytocin flowing in the film or did Jake really want to get back together with his ex-wife? Was it comforting or convenient? I wanted to know all of the answers.

My questions were answered by my film date for the evening, who after the movie told me that he did exactly what Meryl Streep and Alec Baldwin did in the film. At one point in his life, he started dating his ex-wife. They had a passionate affair. He was a victim of my recycling the ex theory. Case rested.

If you have personally experienced the recycling an ex, feel free to comment.